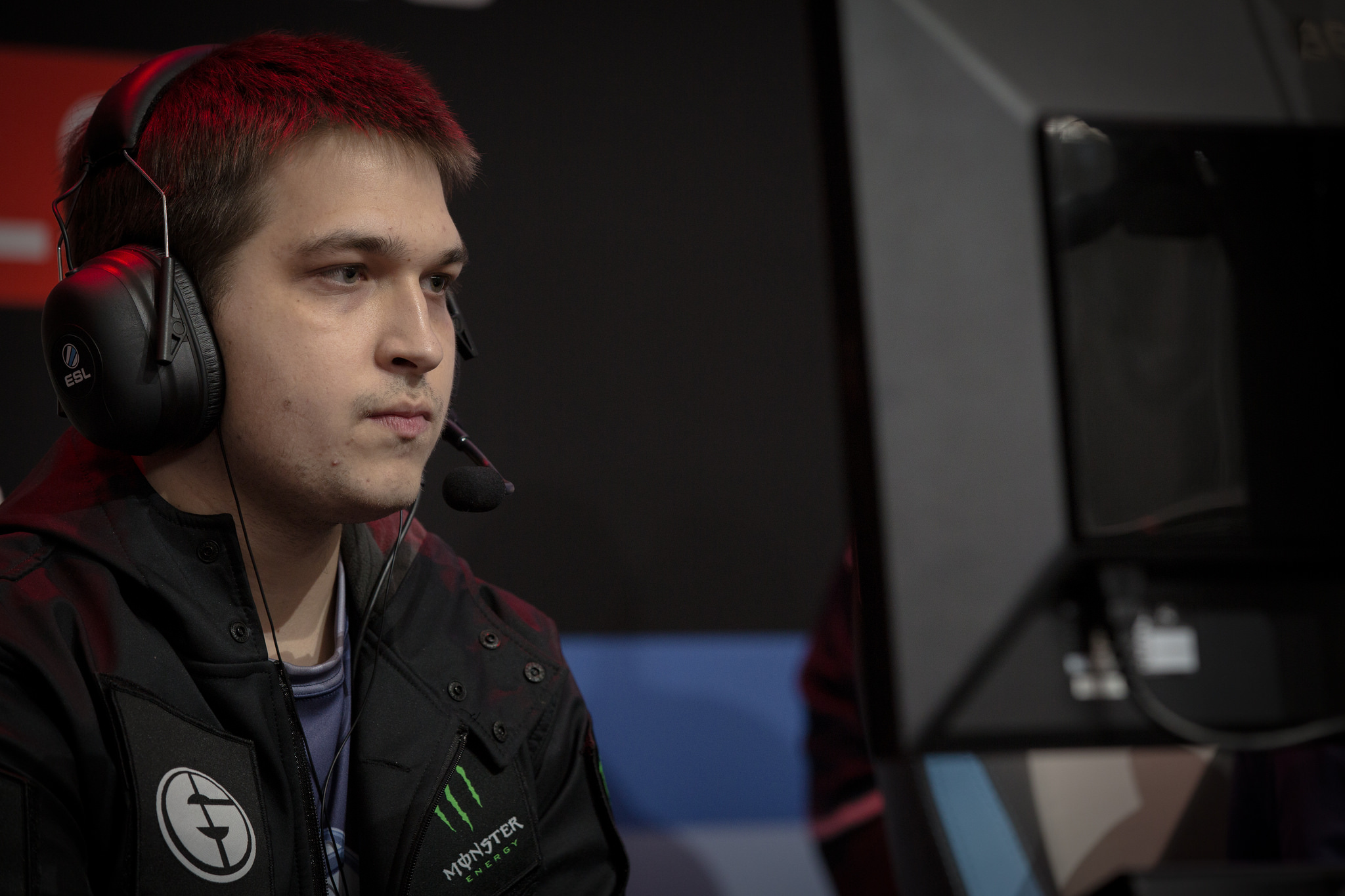 Five years ago Tony Campbell Jr. attended his first Halo LAN. It was MLG Columbus 2010, he placed 26th with a team known as “Fire Breathing Franks”.  No one would expect that Campbell, better known for his gamer-tag “Lethul”, would go on to win two back to back championships within a five consecutive LAN win-streak.

Some may say his success was coincidental, even as I write this many people argue about Campbell’s skill and his position within his current team, “Evil Geniuses”. I personally believe he’s earned his victories, I wouldn’t be writing this if I didn’t. He secured a spot on this team following long time Halo legend Pistola suffering a hand injury that put him on the sidelines for most of the first HCS season. It is true that before joining EG he was on a less than phenomenal team, Believe the Hype, who placed 5th at their last event with him on the roster. Previous to that though they won the ESL MCC Launch Invitational and secured themselves $20,000, however they played with Formal instead of Legit. Whether you believe he belongs on the most dominant HCS team is inconsequential, you cannot deny the fact that since he joined them his team has only lost one LAN and gone on a Final Boss-esque spree of dominance.

What brought him to this point? What did he persevere through to become a champion?

As said before, his beginnings were humble. Although he placed low in his first LAN he quickly picked up the speed. At the next event, MLG Dallas 2010, playing with a squad called “Sicker Than Yo’ Average” Campbell won the first combine on the Halo Reach side. For those not familiar, Dallas was the end of season championship. The main event, which was exclusive to the top eight teams, was played using Halo 3. Reach was essentially a side-show but as the winners of it “Sicker Than Yo Average” still walked away with $5,000. The rest of his team were not players you would want to trifle with either, they were Adrenaline, Blaze and Amish Acorns who all went on to have some form of success in Reach and all at some point joined big named teams.

MLG Dallas 2011, the first MLG event to feature Reach on the main stage. Lethul again teamed with Adrenaline and Amish Acrons but this time they picked up former “Triggers Down” player Neighbor. Here they played under the name “THO Impact” and finished second, winning $12,000. Coming into the event with the 9th seed in their second pool play game they 3-0’d the first seeded team, “Final Boss”. FB were last year’s champions and were coming into the game hot just after 3-0ing Team Carbon in spectacular fashion. This series against FB wasn’t even close, featuring a 5-1 CTF game on Zealot and forcing Halo legend Ogre2 to go -10. In groups the team went 3-1, only losing to “Soul” which included Blaze, Campbell’s former teammate, Formal, who went on to win four Halo 4 events in a row and Ryanoob, an already established player who saw success on “Darkest Hour” in Halo 3. The series was one of the closest played throughout all the pools in the entire tournament, a nail biting 3-2 that could have gone either way.

Coming out of groups confidently 3-1 they managed to move past both “Final Boss” and “Soul” who they were previously tied with. There they won 3-1 over “Believe the Hype” and advanced to the Winner’s Bracket finals against “Status Quo”.  After another nail biting 3-2, “Status Quo” knocked Campbell and his team down into the loser’s bracket. They played another set against “Believe the Hype”, once again 3-1ing them (They started the series 3-0 due to coming from the winner’s bracket, BtH would have had to win 2 consecutive sets).  After winning there they had to move on to fight against SQ a second time. Just like the previous set the team coming from the winner’s bracket held a 1 set advantage. It was another tight series of games, but SQ prevailed and won 3-2 securing themselves first place and leaving second for Impact. His team left with $12,000.

Unfortunately the Halo gods did not shine on Campbell at the next event. Neighbor left their team to join BtH and to replace him they filled the hole with none-other than the player that Neighbor was replacing, A Pure Gangster. There, at MLG Columbus, they finished 11th. Presumably wanting a change, Campbell and APG joined Crimsix and Twin Savior to compete under the name “THO Evil” at MLG Anaheim. He found advancement, this time taking home 10th place. It seems like this couldn’t quench the thirst for success that he had discovered in Dallas.

Campbell and APG once again founded a whole new roster, consisting of them and the aforementioned Ryanoob and Blaze; they were known as “THO Infamous”. At their first event as a team they accomplished the unthinkable, they dethroned “Instinct”. During Reach, “Instinct” was known as the “god-squad”, but had been serious competitors even before then in Halo 3 where the team, captained by twin brothers Lunchbox and Roy, had even won two events. Before now they had won both serious Reach events, taking home $40,000. At MLG Raleigh, things changed.

In their first set of games during pool play they were 3-0’d by “Dynasty”, this is however, misleading. All three games were close and they all could have easily been in favor of Infamous. The team rallied back, going on to 3-0 “Severance”, “Warriors” and “Legendary”. They didn’t make it out of pool play into winners, instead being put into the loser’s bracket against team “Evil” which included the two players that they had dropped to found this new roster. After dropping the first game they came back and won 3-1 convincingly. They pushed forward, getting revenge against SQ, “Dynasty” and beating BtH. This put them in the grand finals of the tournament where “Instinct”, the clear favorite, already had a 3 game advantage. They succeeded, taking “Instinct” to a full two set series and winning the tournament. It was their turn to win the $20,000.

After seeing this immediate success Campbell’s new team stuck together. They finished second at the next event, MLG Orlando, taking only $12,000 after losing to “Dynasty”. This is where things get rocky. With all their triumph it was no surprise that Campbell and his teammates attended the season championships in Providence. What was surprising though was the team’s finish, only taking 11th place. Coming into it they were awarded the third seed, earning them a start in the third round of the winner’s bracket. They were 3-1’d by “Believe the Hype” and after moving down to the loser’s bracket they were immediately beaten again, this time by “Warriors”. After just two sets, they were out of their chance at the championship.

Four months later Campbell returned with a new roster, now joining “Dynasty” with Destin, Tizoxic and Dersky. This was his, and everyone else’s, last Reach tournament. The MLG Winter Championship 2012, in Columbus. He saw a decent result, 4th place and $5,600.

Campbell took a short break, missing out on the MLG Fall Championship 2012 and the first Halo 4 tournament. Although this signified the end of the relationship MLG had with Halo, Lethul would still return.

After what could only be described as “bumming around” in Halo 4 through the handful of AGL and other events that were hosted, most often with “Believe the Hype”, Campbell ended up winning approximately $3,500 from the game.

With the announcement of a new game, Halo 2 Anniversary, came the announcement of new tournaments. In his first pre-launch invitational, Campbell competed on “Triggers Down” playing with Heinz, Hysteria and FearItSelf. Finishing third and being awarded $1,000, it showed that he had a future in this new game. Three days before the launch of the Master Chief Collection and subsequently H2A, Campbell had the opportunity to play in a much grander tournament; the ESL MCC Launch Invitational. Now he was once again playing under BtH and this time alongside Formal, who had become a Call of Duty legend since the last time they competed against each other, Maniac and former teammate APG. Triumphing over “Str8 Rippin”, “OpTic Gaming” and even “Shoot to Kill” (now known as CLG), they managed to win, netting themselves a sweet $20,000.

After winning such a tournament one would expect for this team to continue their momentum. After swapping Formal, who returned to CoD, out for Legit the team only placed 5th at Iron Games Columbus. It was the second event of the season, the first being an online cup that they finished second in. It was here that Pistola suffered his injury and Campbell found himself to be on the future championship team, “Evil Geniuses”. Following his departure, BtH split up and the team was dissolved.

Although EG did not win their first event together, it was only two months later that the team seemed to click and begin their reign. This was the journey of Lethul, Tony Campbell Jr., one of the Kings of the HCS. From “Reach-kid” to Champion.