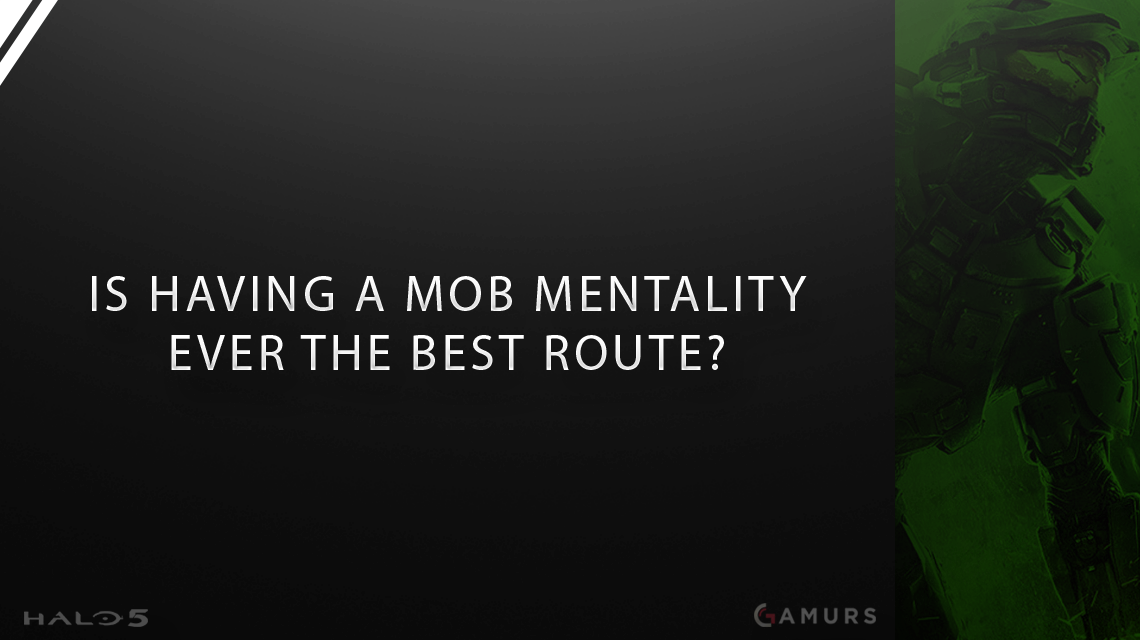 Ever since the birth of Halo,fans have never been hesitant to express their opinions to thedevelopers and higher ups. Whether it’s through social media,forums or any other way to communicate, fans have always adamantlyexpressed their opinions. The idea of expressing your opinionin itself is never bad; in fact, I encourage everyone to expresstheir opinions rather than hold them in, but when our favorite gamestarts to head towards what we feel is the wrong direction, ourfeedback becomes more aggressive and we go from just being fans tobeing a mob of frustrated players.

My best experience of thismob mentality was during the Halo 4 era. Itwas my best experience of it because unlike Halo: Reach, when the community was split in theirsatisfaction over the game, Halo 4 pleased very few fans while the restheavily criticized the game until the end of its life. For me, itwas the massive fall of competitive Halo and it could have verywell been the death of our competitive community if it wasn’tfor the great efforts of those within the community. During thetime of Halo 4, content was stale, many fans weren’tsupportive knowing that while our community was collapsing, Call ofDuty’s community was skyrocketing and there was very littledeveloper support for the game.

With these factors combined, ourcommunity became a mob of angry fans who took thier anger outon 343Industries forcreating a game that could not compete with its competitors. Evento this day when you look through the forums, the wounds343 created back in Halo 4 are still unhealed with many fans continuing tocriticize 343 andhoping that a new developer will eventually take over, and ofcourse the added problems with Halo: Master Chief Collection didn’t help.

Right now, we are seeing a newmob form within the competitive scene over the lack of eventsduring the first season of the Pro League. With the Gears ofWar (GoW) community being promised a $1,000,000 tournament aswell as a large amount of open events next season, Halo fans aregetting even more frustrated at ESL, with many being afraid that the GoW communitywill be completely revived before Halo ever recovers due to thelack of open events we are being provided. Although most people arerespectfully stating their opinions in the hopes that ESL will listen, some are done being nice anddemand that ESL provide a fair amount of open events nextseason.

I recently talked to a Haloplayer, whose name will go unmentioned in order to stayprofessional, who had a bit of a breakdown on Twitter overthis open events situation. I tried to explain to him thatautomatically transitioning from no events to having several in oneseason would be a huge risk and that it would be better if westarted off small and built up to bigger things, but he refused toagree with my idea and continued believing that playing it safe andsmart would lead us nowhere. Playing it safe and smart whenplanning events would obviously be the best option, considering howour community has been deprived from consistent, large scale eventsfor several years and we have no idea how good or bad the turnoutsfor each event would be. Regardless, the player’s anger andfrustration got the best of him and prevented him fromrecognizing the reality of the situation. This mob mentality is amentality that many fans have built over the years and, although Ican’t blame any for being frustrated over the mistakes of others,we need to understand that attacking a developer or tournament hostwill get us nowhere.

As someone who used to have thiskind of mentality, I can assure you that it will get you nowhere.Constantly attacking the developer and presenting an unprofessionaland disrespectful image makes our community as a whole look badfrom the perspective of someone who isn’t involved in ourgame. I know the job of most fans isn’t to be an ambassadorof the community, but if we want our community to grow then itmakes no logical sense to bash our developers on social mediaso the entire world can see. At the end of the day, ourdisrespectful feedback will never be responded to and those tweetsor messages will just be bad advertisements of our game for therest of the world to look at.

As someone who writes articlesthat tend to stir some confrontation, I receive my fair share ofnegative feedback with a few people calling me “stupid” or“dumb,” and some even saying I should be fired for someof my ideas. Although not all negative feedback is bad and some caneven be very beneficial to my writing, there are always those fewcomments that simply have no value to me and I refuse to bring anyattention around those who lack the respect to contact me in arespectful manor. If I have these problems as a writer, imagine howbig someone like Andy“Bravo” Dudynsky has it when fans are alwayssubmitting feedback to him. Just like I reject rude feedback,Bravo, as well as anyone else in 343 or ESL, does the same thing at a much larger scale. Thereality is that no matter how good your feedback is, if it’s in arude manner, you are getting yourself nowhere.

There is absolutely nothingwrong with expressing your opinions, but having a mob mentality anddisrespecting those who work so hard to keep our competitivecommunity alive not only clouds you from reality, but it also getsyou nowhere. Being professional about certain matters isn’teasy, especially considering how we’re all so passionateabout this game, but respect is a requirement whenever you want toget your point across and until you start showing it, you willnever make an impact.

What do you think abouthaving a mob mentality in our community? Let me know in thecomments section below.