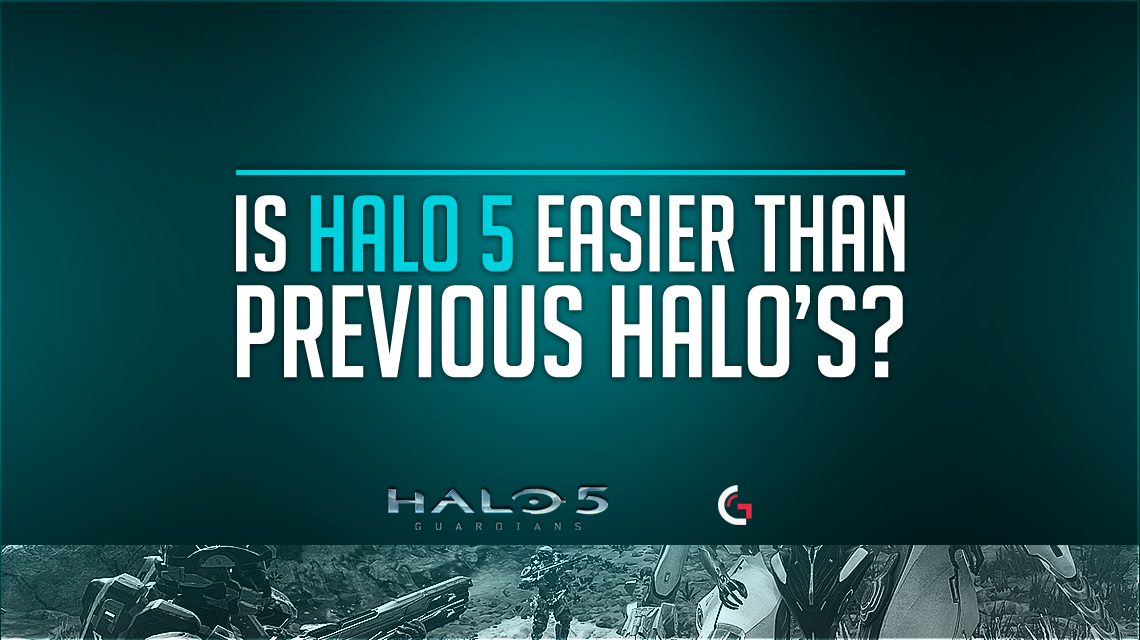 Halo 5’sbirth provided fans with amultitude of mechanics designed to enhance your overall competitiveexperience; mechanics that could change the pace of the game andforce both you and your opponents to rethink what makes Halocompetitive. Right from the launch, many fans immediately attackedthese new mechanics, saying that they “Ruin competitiveHalo.” Some to this day still attack these new mechanics,believing that it makes the game easier than it shouldbe.

In my opinion, this is a veryserious debate to get involved in considering that this may affectthe way Halo6 may turn out, butprior to getting involved, it is important for us to understand thedifference in a game being easier or just different. I cannot speakfor fans of every competitive community, but I know for a fact thatcompetitive Halo fans can be extremely biased when it comes tohaving discussions about the game’s mechanics.

We tend to let our love andpassion for a certain Halo game blind us from the reality. Many ofus argue that using older Halo mechanics in newer Halo games wouldprovide all of us with a great Halo experience, but we tend toignore the fact that the generation of Halo fans we had in the pastare much different than the fans we have today.

From myexperience, Halo5’s new mechanicsmake the game very different than past Halo games, and personally,I believe that these new mechanics have been extremely difficult toadapt to, making it hard at first for me to play this game and attimes I still struggle with some of the mechanics. Of course, thesemechanics may not always be difficult for everyone, therefore adebate is necessary for this topic so we can truly determine ifthese mechanics are something 343 should continue to use in futuregames.

A Halo player by the nameof Kmart recently described his experienceplaying Halo5 on Twitter and I personally believe that this is the bestway to describe the game’s new mechanics. “Halo 5 is soreactionary, a lot of times you just need to soar and shoot withyour teammates…not as disciplined as regular Halos,” Kmartsaid.

Kmart brings up a great pointwhen he talks about how the game is heavily based on your reactiontime and aggressive pushes. I believe that the game mechanicsreward those who play aggressively more than passive. Being able tomake reckless pushes and thruster away from an opponent’s defensepretty much gives the aggressive player a second chance when itcomes to attacking. Although Halo 5 still maintains the basic fundamentals oftraditional Halo, such as map control, player rotations andteamwork in general, giving aggressive players a second chance toattack again heavily changes the overall feel for thegame.

Ever since Halo: CE, one major concept every player needed to have agood understanding of to take their game to the next level was toknow when to play passively and when to play aggressively. Beingable to put a few shots on your opponent, back off and repeatallows you to become much more efficient as a player. In past Halogames, you could not just run around to any location, put off a fewshots and thruster away; there was no thruster and you would mostlikely always get punished for silly plays like that.

Halo 5 allowing players to make so manyoverly-aggressive plays and get away with it seems to be theprimary problem for most players. Many believe that this makes thegame much easier and it can greatly hurt the development ofplayers. Personally, I am a bit unsure as to which side I stand onin this debate. Although I do believe that the mechanics promote anunhealthy play style that could hurt the development of players, Ido not believe that this always makes the game easier.Halo 5’schanges in mechanics go a lotdeeper than just player movement, as 343 also tweaked many weapons, such as the Magnumand Shotgun, which for me at least, makes shooting much harder thanin the past.

With the combination of severalcommon weapons having a greatly reduced aim assist and a fast pacedgame with players capable of flying at you in so manydirections, Halo5 can be a nightmare ifyou are not used to it. This means that playing aggressively doesnot automatically mean that it is easier to get kills because youstill need to keep in mind that the aggressive player needs to hittheir shots in order to be effective and the reality is that mostplayers in this game do not have a good shot. This means thatalthough you may be able to play aggressively in public matches andout shoot many or all of your opponents, that does not mean theentire community can do that.

For me, a game that I feel hasthe same dilemma as Halo is Call of Duty. Halo fans in the pasthave heavily criticized the game for rewarding players who playoverly-aggressive and do not focus on map control. This gives Callof Duty games a run-and-gun feel in public matches, but once again,we seem to forget that the majority of Call of Duty players simplycannot play as aggressively as the very small minority. The mainthing you should take away from this is that although you may beable to destroy your opponents in most public matches, you willeventually face more skilled players who will not allow you to playas aggressively as you climb through the ranks.

Although I do believethat Halo5’s mechanics dopromote a bad style of play, I do not believe it is as bad as manyhave made it seem. Yes, you will get away with making overlyaggressive plays when you are playing against less skilled players,but as you rank up, more skilled players will make this game muchmore challenging for you than in the past and that is when youreally need to start understanding the concept of playingpassively. However, this is just my opinion, and as I said earlier,this little debate is one that is very important for all of us toget involved in so we can determine if these mechanics shouldcontinue to be implemented in future titles.

What do you think about Halo 5possibly being easier than past Halo’s let me know in thecomments section below and let’s get this debategrowing.