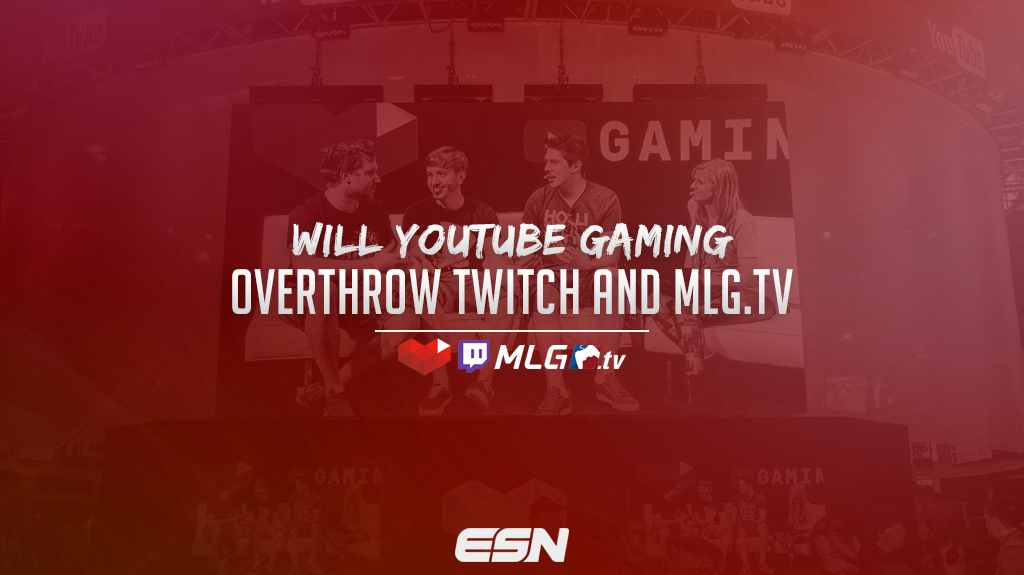 It is no exaggeration to say that streaming has become an integral component of the eSports community over the last few years. No matter what the game is or who is playing that game, thousands of fans tune into streams daily, whether it be for tournaments or simply viewing entertainment. However, with this growth of streaming has come the battle for supremacy amongst streaming platforms, especially between Twitch.tv and MLG.tv.

While it is no secret that MLG.tv has basically monopolized the streaming of Call of Duty, Twitch.tv has a much larger viewership in other games, such as Counter-Strike: Global Offensive, League of Legends and Dota 2. According to Business Insider, Twitch accounts for 43% of live-stream traffic and on average, 12 billion minutes of content was watched per month on Twitch’s website back in 2013. However, there is a new streaming platform that has just gone public and it is threatening to overthrow both Twitch and MLG.tv as the top streaming platform: YouTube Gaming. https://twitter.com/Fwiz/status/638851620919451648 Google launched the YouTube Gaming platform on Aug. 26, and as their Twitter account’s description states, they have one simple goal in mind: “Let’s play.” Google created the YouTube Gaming streaming platform just for gamers after seeing all of the growth in the gaming community over the past few years. https://twitter.com/YouTubeGaming/status/609421520084058113 As quoted from their Twitter account, “We’re connecting you to the games, community and culture that matter to you – by gamers, for gamers.” Keeping the gaming community in mind, Google created YouTube Gaming focused on gamers themselves; to help make it easier for gamers to find videos and content of their favorite video games, along with making it much easier for gamers to connect with their favorite YouTubers. By creating YouTube Gaming, Google has effectively created a streaming platform that combines the best components of Twitch and MLG.tv to go along with their own additional new features that will be exclusive to YouTube Gaming (at least for the time being). Most of the well-known gamers in every eSports community use YouTube in some capacity to upload videos of their gameplay, as well as upload video-logs, or “vlogs” where they directly interact with their fanbase. However, some players might be concerned about transferring their fanbase from Twitch or MLG.tv over to YouTube Gaming. Well, that should not be much of an issue, because fans can use the players’ traditional YouTube channel to connect straight to their new YouTube Gaming stream channel. Thus, as long as they have a previous presence on YouTube, the fanbase will be able to follow the players over to YouTube Gaming. Everything is right there on YouTube Gaming. As Twitch has started to move away from stream archives, YouTube Gaming will be integrating all of their streams with the user’s YouTube channels, which also helps with consistency in terms of views from a player’s fanbase. In addition, Google has made it so that everything on YouTube Gaming integrates with the traditional YouTube platform. This means that players will be able to stream on YouTube Gaming and upload their stream, clips from their stream or any other videos directly to their YouTube channel. https://twitter.com/YouTubeGaming/status/626482206811275264 However, on a larger scale, YouTube Gaming has the potential to help with not only gaming in general, but mainly with the professional eSports community as well. YouTube Gaming has integrated a rewind feature, which is a big advantage for eSports so that people can rewind the streams that they are watching. Viewers might do this if they want to see a particular play or part of the game again, or if they are studying the competition to try and learn what their opponents best or favorable setups are. All-in-all, the rewind feature can really end up being a great tool for everyone in the eSports community to utilize. YouTube Gaming already has a slight advantage over MLG.tv in terms of digital display. YouTube Gaming will be using the same 60fps and 1080p streaming quality as Twitch, which is an improvement over the MLG.tv “Best” quality function. Tech Advisors provides a very detailed and in-depth analysis of the basics of YouTube Gaming and how it functions, including a description of some of the on-screen features such as how to navigate the gaming channels and gaming streams. However, as a whole, YouTube Gaming appears to have innovated some interesting new features which could lead to a very promising and bright future in the eSports streaming industry. While YouTube Gaming definitely has some catching up to do in terms of viewership in comparison to Twitch and MLG.tv, the potential is there. YouTube Gaming has a lot to offer, especially to the eSports community, and if this platform is utilized correctly, it will absolutely have the ability to give Twitch and MLG.tv a run for their money. Do you think that YouTube Gaming has the potential to overthrow Twitch.tv and MLG.tv and become the best streaming platform? Let us know by commenting below or tweeting us @eSportsNation.