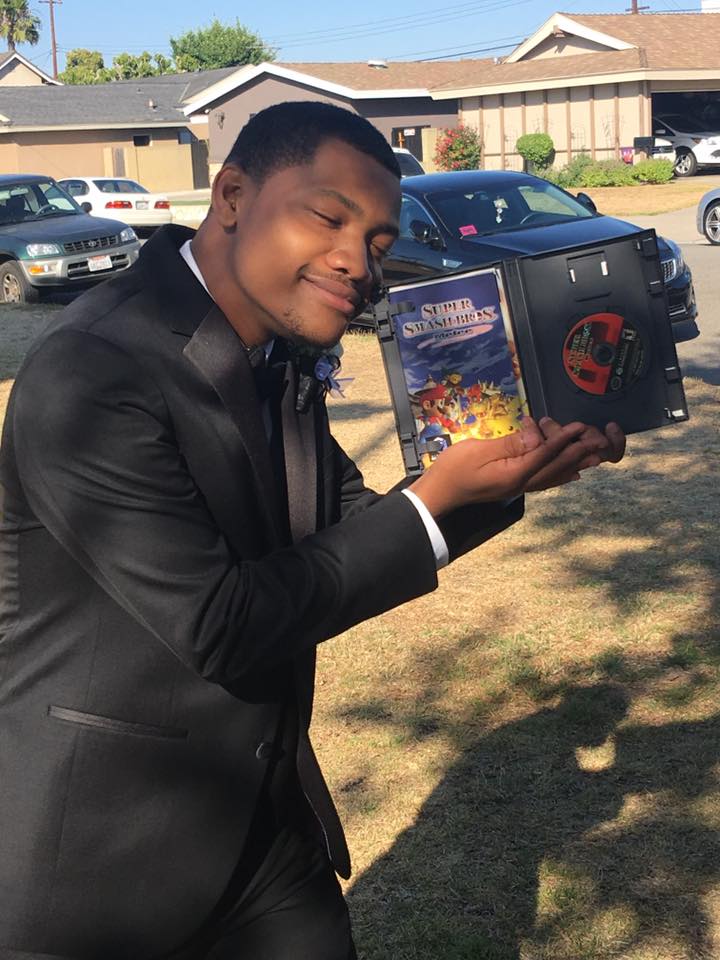 It’s hardly news when a high school student brings his “one true love” to prom. But last weekend, Californian and gamer Chris Burwell took the idea to a literal extreme. On Sunday, he suited up in a tux, grabbed the corsage he’d bought earlier, and took his copy of  Super Smash Bros. Melee to the prom.

The 15-year-old game has maintained a thriving and passionate fanbase. The game’s bustling subreddit boasts more than 200,000 subscribers. Diehard fans might insist that having a controller signed by pro-players Jason “Mew2King” Zimmerman or Joseph “Mang0” Marquez will make them play better. But Burwell took it to the next level.

They got jiggy on the dance floor, throwing out those b-air moves. Photo via Chris Burwell/Facebook

The 17-year-old lives in Southern California, which has one of the strongest professional scenes for Melee—a large portion of professional players are located in the area, including Weston “Westballz” Dennis, Joey “Lucky” Aldama, and Johnny “S2J” Kim. Burwell told the Daily Dot that he’s been playing Super Smash Bros. games since the fifth grade, but only started playing Melee in the past year. He mains Marth, because the character has “a theatrical splash with all of his moves.”

“He feels graceful and his style rewards technical game play,” he said. “I also love the Fire Emblem series of Nintendo video games which is where he comes from.”

The prom was on Saturday, June 4. Burwell posted the photos to Facebook the following day. The post first went viral on a Facebook group called Melee Hell, a popular gathering place where over 18,000 people share memes, stories, and other posts pertaining to Super Smash Bros. Melee.

“I feel like none of my friends were all that surprised,” Burwell said. “They know my weird self deprecating, ‘is it ironic or is he just weird,’ kind of humor. For the people who didn’t know me well it was a great conversation starter. In the end people were mostly pretty chill with it, they just thought it was funny.”

Burwell went as far as buying a traditional corsage for his beautiful date. Photo via Chris Burwell/Facebook

Burwell said he was “surprised” by the response.

“When I first posted it to the Facebook group Melee Hell and it was popular I expected that because we were all fans of the game and ‘in’ on the joke,” he said. “But I never expected [it] to leave the fighting game community really. In the end it felt nice because (for the most part) people were positive about it and I gained a lot of followers. I’m still very surprised at how big this has gotten though.”

Not all the comments were positive, but Burwell had some sage advice for fellow students. “If you’re in high school be yourself, do whatever you want as long as it’s not harmful to anyone else,” he said.

“No one’s loyal these days but Melee’s always there for you.”

And then they both happily multi-shined into the sunset.