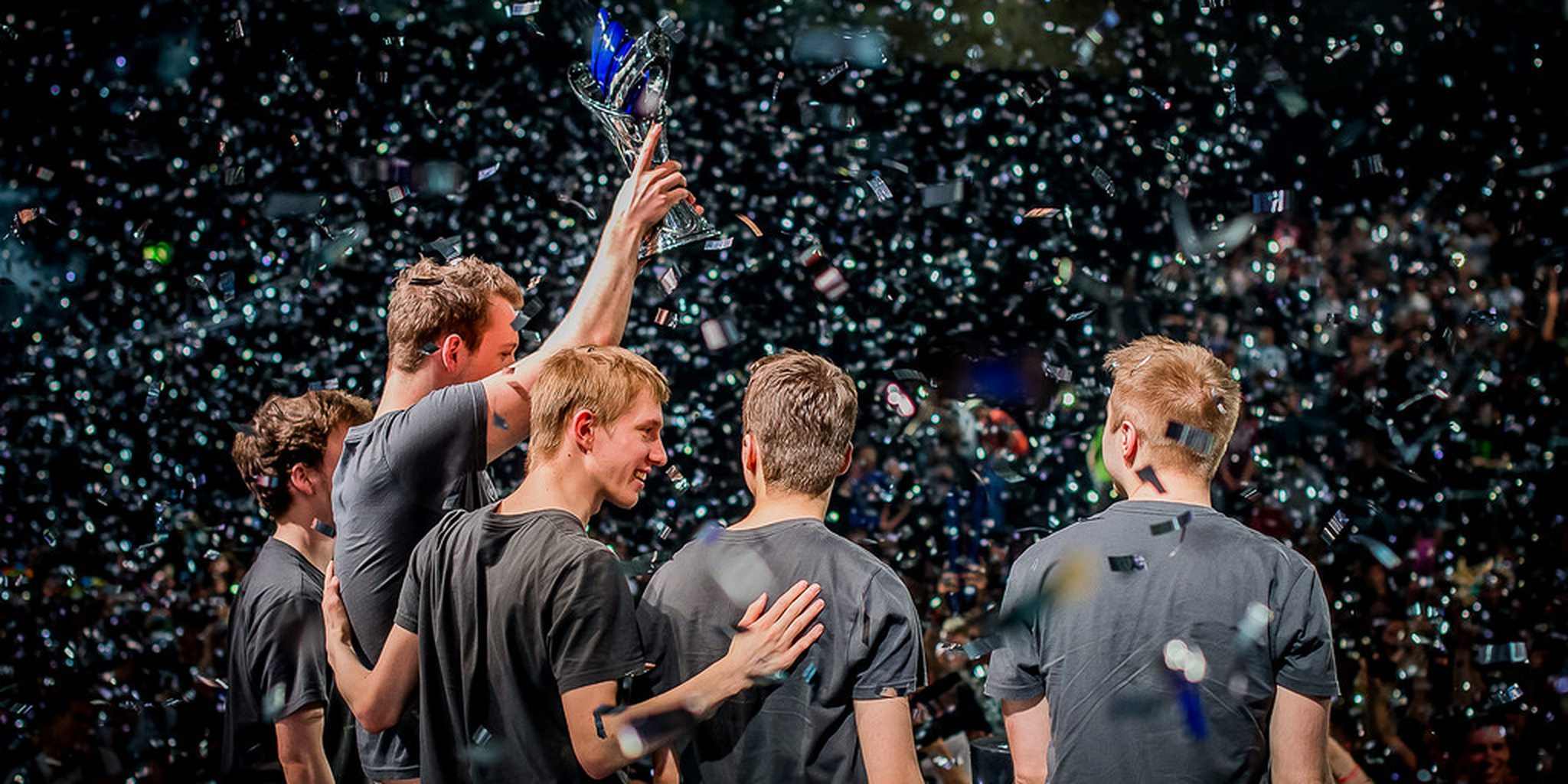 The League Championship Series starts today, and after months of roster madness, team rebranding, and LCS rule changes, we finally have a pretty clear idea of where things stand.

Of course, ranking teams based off on-paper rosters and rumors from practice sessions is a fool’s errand—but a fun one.

Whether you’re rankings teams using a panel of experts using specific criteria, Western bias, or the arbitrary whims of a writer, power rankings are sure to stir the most basic instinct of any sports fan: that their team is better.

Within just a few hours, the League Championship Series will be in full swing, and everything will have changed.

For the past year I’ve watched Zachary “Sneaky” Scuderi sit in interview after interview with this little smile bordering on a smirk, like he’s really better than everyone else and angry that no one’s noticed, doomed to suffer through passing comments about Cloud9’s mechanical weakness until the pent up frustration causes him to snap. He’s snapped all right, going on a rampage at Worlds and IEM San Jose. Scuderi’s growth into a real hyper carry player shows Cloud9’s evolution and ability to adapt.

Those in-the-know are afraid of Team Liquid. Apparently the combination of the best American support, Alex “Xpecial” Chu, and a man once considered Korea’s best marksman, Chae “Piglet” Gwang-jin, is unstoppable. Who knew? Well, everyone. But no one knew just how good mid laner Kim “FeniX” Jae-hoon would be. The top-laner-turned-mid-player is seemingly playing like a star in the preseason.

Of course, last year Curse Gaming was a practice powerhouse heading into the season, but they still couldn’t shake off the Curse fourth-place curse. Maybe adopting the new name is what their foes should really be scared about.

The defending LCS champions swapped one European jungler for another in a move that largely looks like a sidegrade. After a poor IEM showing, SoloMid needs to show that their LCS playoff play last season wasn’t just a case of peaking at the right moment. This is one of the best teams in America, but they’ve got work to do to drop the “one of” qualifier.

Counter Logic Gaming fans are likely in for another thrilling season of being decidedly above average, but below elite. The wild card here is Jake “Xmithie” Puchero—if he can provide the form that saw people mentioning him in the same breath as William “Meteos” Hartman, maybe Counter Logic Gaming can reach new heights. But his last year of play speaks otherwise.

Team Impulse’s roster is a hodgepodge, but I love how it’s constructed. One rock-solid Korean veteran, instantly one of the top three players at his position in the league. One reigning LCS MVP. One solo queue all-star from Korea in the shallowest position in the local region.

If you’re going to gamble on Korean roster acquisitions, going for the top solo queue jungler is the bet to make. Jungle is America’s smallest talent pool yet accounts for so much in the standings—just look at teams like Cloud9, SK Gaming, and ROCCAT. Will Impulse’s Lee “Rush” Yoon-jae be a star? Maybe, maybe not, but it gives Impulse hope—they could potentially take the title if things work out.

Still, the bottom lane likely needs work—Apollo Price was the only marksman to die over 80 times in an LCS season last year—but Adrian Ma is the type of challenger player you gamble on. He’s a god in the game, after all.

The expansion version of Gravity looked much better than the team with middling performance through the challenger series, in large part due to shoring up their top lane, a necessity heading into an LCS season with many strong players at the position. Gravity looks slightly above average at every position in their lineup, leaving them a likely playoff finisher, but it’s hard to expect more than that.

Nepotism doesn’t play well in sports, and it’s hard to see the addition of Shin “Helios” Dong-jin’s brother Shin “Avalon” Dong-hyeon as anything but, considering his supposed Diamond ranking on the solo queue ladder. That doesn’t bode well for a franchise with a history of management issues, which is a shame considering Johnny “Altec” Ru and Eugene “Pobelter” Park could be the core of a contender. Visa issues may give us a window into what this team might look like without the Korean imports, at least early in the season, and it wouldn’t be all that surprising if the local version of the roster performed better, considering Winterfox has some solid challenger talent available as backups.

The debut of Dignitas’ two Korean imports was nothing less than horrific at IEM Cologne, with the team nearly losing to a Turkish pickup side. It’s hard to see the team doing much better during the season considering, while the Koreans weren’t great, they weren’t the worst performing players in Cologne. Much will rest on the shoulders of new captain Alberto “Crumbzz” Rengifo, tasked with bringing Dignitas into the post-Rock Solid era.

In a season where the top lane has suddenly become the deepest position, fielding Cristian “Cris” Rosales could be a death sentence, based off his play in the challenger scene. Coast’s lineup is solid but they’ll be playing from a deficit most games unless Rosales shapes up.

Top laner Steven “CaliTrlolz” Kim is the one bright spot for LCS newcomers Team8, at least until they call Alex Ichetovkin off the bench. Kim’s leave of absence from pharmacy school lasts one year, but he likely won’t need that long since Team 8 is not long for this league.

That’s let many write off Elements in favor of shiny new toys, but betting against Henrik “Froggen” Hansen is always a mistake. (Except against Brazilians, apparently.)

If Elements are the Planeteers, then SK Gaming are the eco-villains. The team, already featuring a star jungler whose toxicity got him suspended during the World Championships, picked up one of Europe’s most incendiary players in Konstantinos “FORG1VEN” Tzortziou this offseason.

That gives SK Gaming a lineup with arguably the top player at three positions in Europe—top, jungle, and marksman. Plus they even upgraded their mid laner while keeping mastermind support Chris “nRated” Seitz.

The only thing that can stop SK Gaming this season is a racial slur.

The Polish team gave their two superstar players partners in crime this offseason, replacing their two weakest links with players that should only bolster the effectiveness of jungling god Marcin “Jankos” Jankowski and playmaking support Oskar “VandeR” Bogdan. Erlend “Nukeduck” Holm was the perfect addition to a lineup that needed more firepower from the carry position.

It seemed like Fnatic were in dire straits when most of their legendary roster left the squad, but by all accounts the team is performing extremely well in the LCS leadup, if perhaps not at a level fitting the three-time champion. Korean imports Heo “Huni” Seung-hoon and Kim  “ReignOver” Ye-jin are getting solid reviews, as is the Bora “YellOwStaR” Kim-led bottom lane.

Signing mid laner Fabian “Febiven” Diepstraten was a master move for the organization. Instead of struggling to replace superstar Enrique “xPeke” Cedeño-Martínez, they may have even upgraded on him, getting a more consistent performer.

After a year of turmoil it finally looks like Gambit Gaming has a solid lineup. They certainly showed that at IEM Cologne, winning their sixth IEM tournament in impressive fashion. That’s gotten fans amped for the new Gambit team—Luca “Cabochard” Simon-Meslet looked great in the top lane. Kristoffer “P1noy” Albao Lund Pedersen looked like a star in the bottom.

But as their tournament record shows, Gambit Gaming is a team well tuned to peaking over a weekend tournament where their innovative play can often turn the tide.  Surviving a grueling two-month season for the Russian players, who end up strained due to travel and visa issues, is a different story. This season, they might finally change that with their combination of experience and new talent.

Europe’s mid-tier teams are tough to rank; it really is a crap shoot. H2k-gaming lost their best player in Diepstraten and they replaced him with an IEM Cologne goat, Ryu Sang-ook, who looked poor while playing for ROCCAT. But he’s had a tough transition to Europe—in the season I can see him kicking and screaming to keep his pro gaming career alive. The cast surrounding him is stronger than many think after Diepstraten’s departure; one man isn’t enough to single-handedly dominate the challenger scene. It may be rough early for H2k-gaming, but they’ve got potential to challenge for a playoff spot.

Win one game, no one cares. Win a series, and everyone loses their minds. The Unicorns of Love are everyone’s favorite dark horse after their innovative play beat Team SoloMid in two games at IEM. But they’re forgetting a year’s worth of average play in the Challenger scene, a track record that can’t be ignored.

While Tristan “PowerofEvil” Schrage and company are certainly a solid squad, they’ve benefit in tourney play from creative strategies and tactics, successes that are hard to replicate consistently over a long LCS season.

I’d love to rank MeetYourMakers higher. Their experience last season is valuable, a core of Mimer Ahlstrom and Rasmus “MrRalleZ” Skinneholm is solid, especially when you add in mid laner Marcin “SELFIE” Wolski. But Wolski, who is now calling himself “Kori,” isn’t playing for mYm in week one, and may continue for the rest of the season.

Last season’s Cinderellas, the then-Supa Hot Crew didn’t finish the season as hot as they started. And while some of their competitors worked at bettering their rosters, MeetYourMakers mostly treaded water. Cho “H0R0” Jaw-hwan seems like a high-risk replacement for Matt “Impaler” Taylor. Nicolai Nisbeth continues their revolving door at support.

With Wolski, MeetYourMakers could pull together as a playoff contender. Without? They’re in for a rocky season.

The last-place team from last split did little to improve over the offseason, making one move by necessity as Pawel “Woolite” Pruski left for greener pastures. Granted, one of the moves they did make happened at the end of last season—Søren Holdt has three weeks as the team’s mid laner. And while they’re due some improvement after more time together, those three weeks were only good for a 2-6 record, worse than their season pace.

There’s little reason to expect enough improvement to boost Wolves out of the relegation zone.

The new kids on the block made waves during the expansion tournament thanks to mid lane play that had people calling hacks on mid laner Isaac “PePiiNeRo” Flores. He’ll need to perform even better for Giants to have a hope in the LCS. Newcomers often struggle to acclimate to the professional scene, and Giants looks more green than most. They’ll be hard pressed to hold on to their LCS spot.