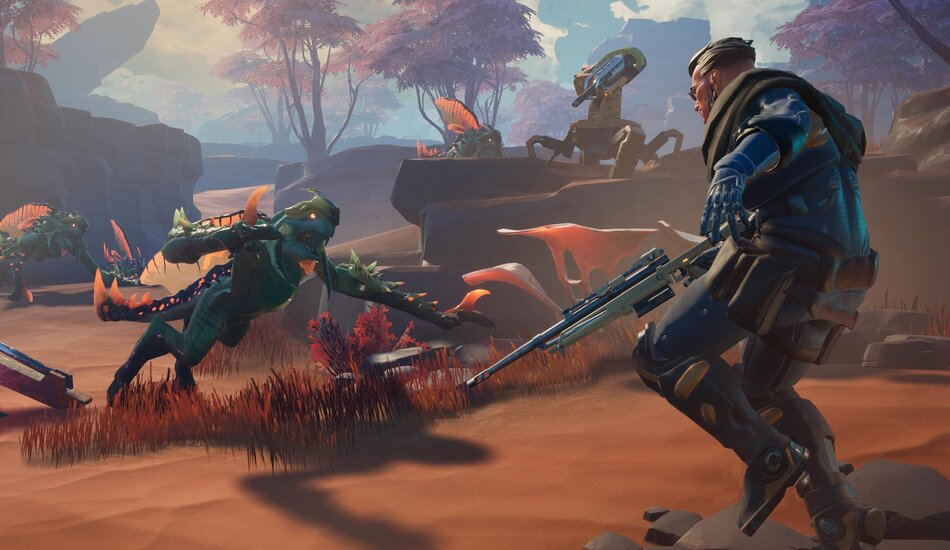 The Cycle is a free-to-play PvEvP multiplayer competitive quest game in which completing contracts is the key to leveling up and crafting gear.

Recently launched into open beta with over 250,000 players signed up, The Cycle offers players three fractions to enlist in during their duration on Fortuna III. Contracts are tied into those fractions. They award players with money and items needed for crafting.

Completing contracts goes toward XP for leveling up and earns players money so they can upgrade gear from the black market. Contracts are issued out for collecting resources (giving players the items they need to craft gear and weapons), protecting or destroying fraction drones, wiping out wildlife, and being the “king of the hill.”

In total, there are 10 contracts available for players to complete in The Cycle. Multiple contracts can be completed each round and additional resources can still be collected once a contract has been completed.

Contracts for Letium Gas are marked with gas nodes on the ground and through a green flame on the map. Players can enter a contract by calling down a refiner or by stealing and taking over other prospectors.

When stolen from others, it increases your yield. But watch out for other players who aren’t too happy about you stealing their contract. The more Letium Gas collected, the bigger the rewards are at the completion of the match.

Veltecite is one of the most abundant minerals on Fortuna III. Located all around the map during a match, they’re easy to mine and can yield some nice rewards. The only downfall to mining Veltecite is that it attracts the wildlife on Fortuna III.

Watch out for creatures spawning and take them out quickly to prevent damage from being done to your mining equipment. Once the mining is complete, players will hear the hum of a tune coming from the equipment. Larger mineral samples require more time to yield but also provide a decent amount of materials needed for crafting gear. Players can also steal Veltecite Minerals being mined from other prospectors.

Killing the creatures that roam Fortuna III comes with the territory but under certain circumstances, it’s considered a contract. Located on the map with the symbol in the image above, players need to take all of the creatures out and collect the samples left behind.

Killing more wildlife in a specific area will attract stronger creatures that might be nearby. Any samples left behind are also fair game, so protect and collect before someone else grabs them.

Brightcaps aren’t your everyday mushroom. They glow blue but they’re still edible. The idea isn’t to eat them, however. You’ll want to collect them and drop them off at a collection point. Each time a Brightcap contract is completed, the amount required goes up.

In addition, other players can steal your Brightcaps by injuring or killing you. And if another prospector isn’t coming after you, a tick likely will. The trick to collecting Brightcaps is to get them dropped off at collection points as soon as possible, rather than running around the map with your pockets full.

Other fractions, however, don’t want these mechanical birds launching back into space and will award a contract if the drones are destroyed. Fulfilling the contract for Osiris reaps some major rewards, so make sure to get that last bird in the air.

Every map during a match contains only one active uplink. Activating an uplink to complete a contract in The Cycle requires a player to stand within the syncing rage. Once synced, however, a player can move around freely.

Like most contracts on Fortuna III, other players can steal your uplink and sync themselves to it instead. To complete the contract, players need to hold the uplink until all the data is removed. If you take too long to upload the data, an uplink can move locations. Once this occurs, it’s free game to any prospector who can sync with it.

The power-up contract contains three terminals and one central node. Three strings run from the node, linking them to the terminals. Find the terminals and interact with them (sometimes killing off wildlife) and then return to the central node to turn it on. Whoever flips the switch to activate the node is the one who gets paid for completing the contract.

Once enough power-up terminals are completed, a mother base will show up on the map. This base requires three terminals to be activated as well and then the central node needs to be defended from other prospectors. The longer you defend the node, the more contract points you’ll be awarded.

Zeal Shards are highly sought after and visible to everyone on the map. Contract points are awarded for the length of time a player carries the Zeal Shard around with them. Any damage that’s taken, however, will likely cause the Zeal Shard to fall out of a player’s suit, putting its location back on the map for everyone to see.

Rare red Zeal Shards can be randomly found on the map. They don’t award as many contract points but they’re extremely valuable on the black market. Live long enough to take off in the Evac shuttle and make bank when you get back to the station.

As the storms appear on Fortuna III, crystals known as central spikes are left forming on the ground. These are Surge Crystals and they won’t appear on the map until a storm is located. Naturally, the storm is dangerous and can kill you, just like other prospectors who are after the same Surge Crystals.

Contacts are rewarded for the number of Surge Crystals retrieved. Upon the completion of each contract, the collection number requirement continues to go up.

To make things interesting when playing The Cycle, there’s a countdown timer attached to each match. Players need to make their way to the evacuation pad before the timer runs out to catch the shuttle. Anyone left behind perishes in the storm.

But there’s a couple of catches to this process. Other prospectors might want to take you out depending on your rank. In addition, the noise from the storm attracts the wild creatures to the pad. The Evac contract awards points for taking those creatures out. Each player is rewarded for the number of wildlife destroyed prior to hopping aboard the evacuation ship in The Cycle.