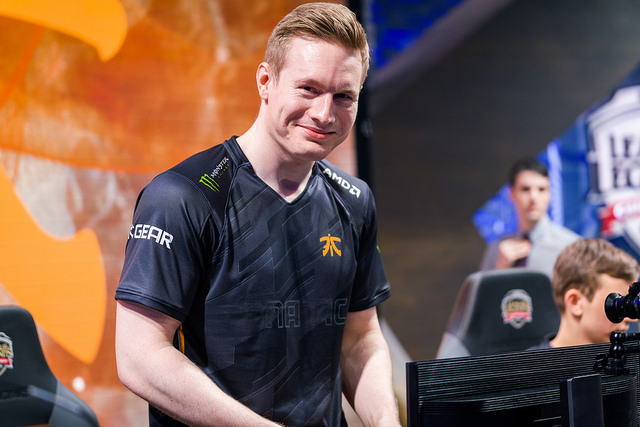 Splyce faced a tough match-up against Fnatic in the EU LCS today.

Their difficulties came from Fnatic having upgraded their coach and support position with the addition of Joey “Youngbuck” Steltenpool and Zdravets “Hylissang” Iliev Galabov respectively. Meanwhile, Splyce has a new roster, with only Kasper “Kobbe” Kobberup remaining from the team that played last year.

Fnatic got off to a great start in the top lane as Mads “Broxah” Brock-Pedersen and Paul “sOAZ” Boyer combined to get first blood on Andrei “Odoamne” Pascu. This gave sOAZ on Ornn a massive lead that allowed him to bully the lane and earned him a solo kill.

SOAZ was not the only one winning his lane, however, both mid and bot lane took advantages as Fnatic were winning across the map. Caps took a strong lead on Azir in the mid lane, eventually leading to a huge creep score advantage for himself.

The combination of Xayah and Rakan in the bot lane for Fnatic allowed them to play passively and not get caught out and die while they took control over the top side of the map. As the team transitioned into the mid game they struggled at first to find the dagger that would win them the match.

The game began to stall out at the 25-minute mark as Fnatic attempted to gain vision control to set up for Baron. Splyce did not roll over and give up, they continued to fight and grabbed some skills to stall out Fnatic.

Despite giving up a few kills, Fnatic never lost control of the game and stayed on the front foot, though it took them a long time to break Splyce’s base.

In the 38th minute of the game, a failed engage from Andre “Xerxe” Dragomir lead to a counter engage from Fnatic that lead to two inhibitors going down in Fnatic’s favor. After that massive fight for Fnatic, the team had enough steam and enough of a gold advantage to charge down the Splyce base and take their first win of the EU LCS 2018 Spring Split.

Tomorrow Fnatic will play the 0-1 H2K in the hopes of beating another new-look team and top the standings after the first week. Splyce will face off against the Unicorns of Love where the jungler’s, Xerxe and Jonas “Kold” Andersen, play their former teams for the first time.