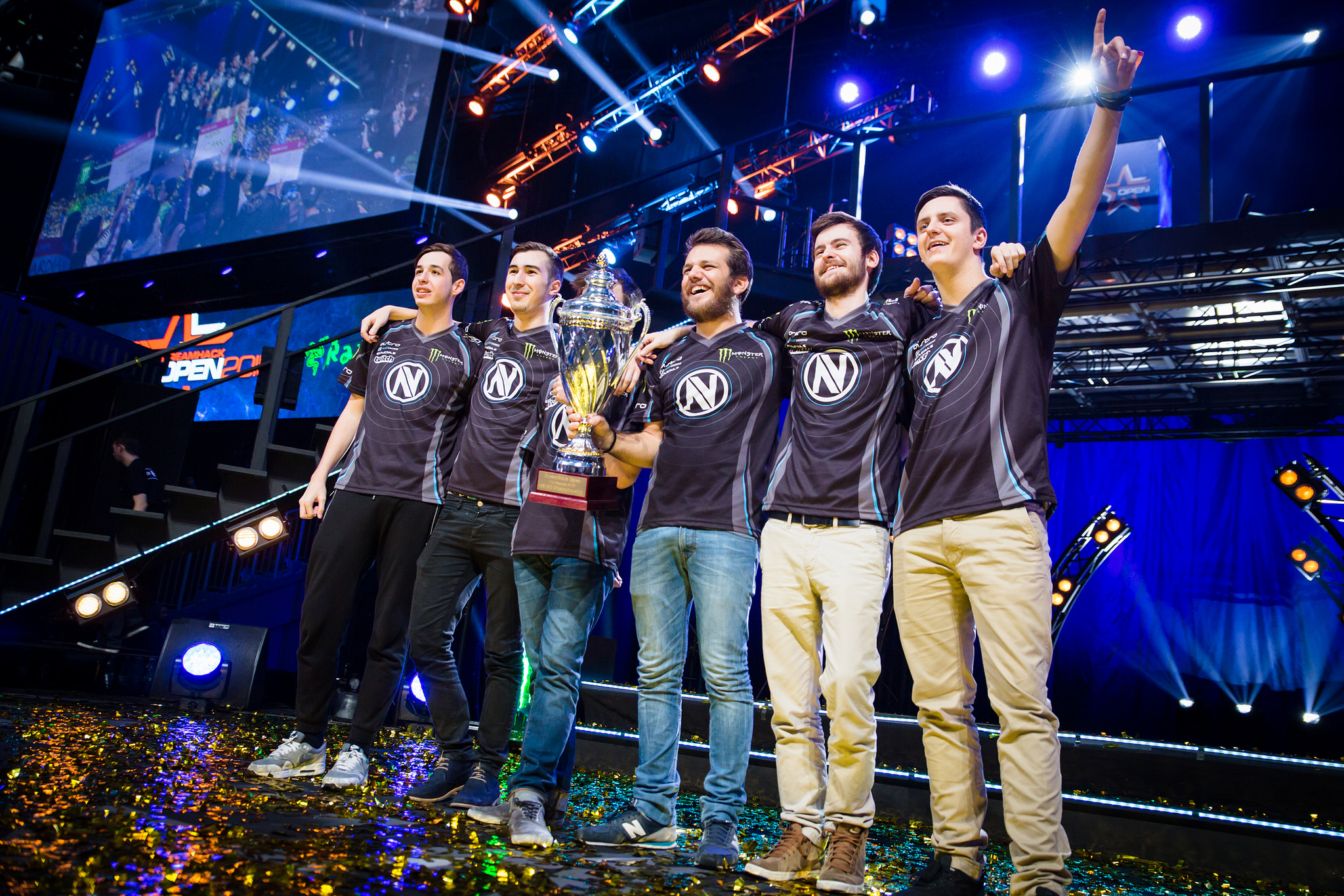 As a result, the EnVyUs core that graced our scene for the last two years will cease to exist. The core of apEX, KennyS, Vincent ‘Happy’ Cervoni, and NBK have been separated, ending the run of the 2015-17 EnVyUs squad. Although EnVyUs’s many dark valleys of 2016 has tarnished a future of potential success, this drought of results will not be the defining force in their legacy. In order to tell the story of this squad, you must first tell the glory of their peak, and how they somehow managed to trap fleeting blue lightning in a bottle.

The EnVyUs roster of mid 2015 was born—as most French teams are—out of a slump in recent results and internal politics that would rival that of any geo-political summit. KennyS and apEX would be the two members to join, alongside Happy, Kioshima and NBK. Both of the newcomers were in dire slumps individually.

While kennyS was able to cling to his late 2014/early 2015 form that saw him become debatably the best player and AWPer in the world, apEX had almost nothing but occasional rounds of brilliance to make a case for his inclusion into the side. As a result, the community’s pressure largely went onto the shoulders of kennyS, in hopes that Happy’s much looser system would allows the young sniper and his magic stick to return.

However, as almost instantly revealed in their first tournament as a team at IEM Gamescom, it was not just kennyS who peaked. It was the entire team.

Historically, at one point or another, every member of EnVyUs could boast a time where they carried their team. Whether it was Kioshima in Clan-Mystik or apEX in the early days of Titan, individually, this team was stacked. Yet, teams of this nature often fail. Look no further than Astana Dragons or 2015 Kinguin to see the result of star studded rosters falling apart at the seams.

The IEM Gamescom performance could therefore be pinned on the strange ‘three lives’ format that the tournament used and as a by-product of the short-lived honeymoon phase new teams go through. Except that their performance immediately after – at ESL One Cologne 2015 – showed that they had not only maintained this strangely high level of form, but were getting better, very, very quickly.

Their style was unique and would redefine the meta. Force buys, an aggressive, disregard of utility, loose calling and a roster who you could put any player in a clutch situation and expect to win. Every game was ride or die, lose a force buy and you force again. Tec 9 armour, tec 9 armour, tec 9 armour. Eco rounds were pulled out only when absolutely needed. The sheer amount of talent and raw aim skill will overwhelm the eventually, even without rifles.

God forbid that they actually get an economy going after these force buys or win a pistol round. With the dynamism of kennyS across the map, and Happy’s confidence fuelled secondary role, if EnVyUs can consistently get the AWP the opposition’s chances of winning slip even further. They were a group of five not sated by the mortal trappings of the games status quo.

This style of play would continually manifest itself at the tournaments following IEM Gamescom and ESL One Cologne 2015 which they won and placed second in respectively.

However, it was not without its shortcomings. Ninjas in Pyjamas exposed the weakness of this constant aggression when they matched nV with their own burst of individual form and a dynamic T-side that broke the CT defence and economy. The loose and aggressive style combined with force buying led to a tattered CT side in a time where the meta revolved around lock-down counter-terrorist defence.

On top of this, their map pool was questionable as well. Inferno, Cache and Cobble, with the occasional Dust II and Mirage map was as deep as it went. This was a decent match-up for teams who they would eventually meet deep in a tournament, like Fnatic and Virtus Pro.

However, these two key weaknesses were easily patched up by sheer skill if all players were in form. If there’s smoke, there’s fire, and for nV if there was decent form there was results. Two best-of-five wins over both Virtus Pro and Fnatic in two full series showed that Happy was also a capable mid-round caller on both sides of the map, at times out rotating pronax and the Poles. This boded well for the upcoming Major – Dreamhack: Cluj-Napoca.

Cluj-Napoca brought with it what seemed on the surface an impossible run to the finals, with the potential of having to beat Fnatic, Virtus Pro and TSM to win the event. Fortunately for EnVyUs, a series of upsets combined with the anatomical honing of their own style meant that their Cluj tournament run was difficult, but not impossible.

Fnatic were dominated on nV’s map picks in an easy 2-1. While G2 Esports clashed stylistically and gave the Frenchman a good run for their money, however, individual skill once again saw them power over opposition. This culminated in their grand final appearance against the highly dangerous Na`Vi. Na`Vi had a style which on-paper counters nV completely. Slow T-sides, methodical executes, constricting map control, and an explosive CT side presence that catches teams completely off guard. They were a nightmare to deal with when in-form.

But these on-paper calculations did not take into account the kennyS factor, and neither did Na`Vi.

Dropping 26 kills on Na`Vi’s map pick of Train, kennyS, with entry work from apEX drove his team to win the CIS squad’s map pick and a historically weak map for nV. This easily transitioned to EnVy’s historically dominant map of Cobblestone, which ended convincingly at 16-5 in nV’s favour with help from an NBK in vintage carry mode. The series ended in a convincing 2-0 in spite of the apparent hurdle Na`Vi clearly represented.

Skill overcame tactics, force buys and individual play trumped slow executes, the meta had been broken, and EnVyUs were at their peak. But not for very long.

They would never again replicate this form, in large part due to individuals returning to boringly above average levels of form, with other teams raising their levels at the same time. In a team that relied so heavily on this skill, any dip in form leads to an immediate and drastic dip in results. They never truly recovered their individual levels from the Cologne 2015 to Cluj-Napoca 2015 period probably because it was impossibly high to begin with.

In the history of Counter-Strike only a select few teams come together, click immediately, and then dominate internationally. These teams are generally some of the greatests teams of all time—NiP, Fnatic’s 2014-15 and 2015-16 rosters, Luminosity/SK 2015-16, LDLC 2014-15, and the 2015-16 EnVyUs roster. Whilst the other teams on that list boast some of the longest reigns of consistent dominance out of any teams the game has produced, nV had a small gap of only three months were they somehow managed to trap blue lightning in a bottle and reach a peak of form that rocked the CS world.