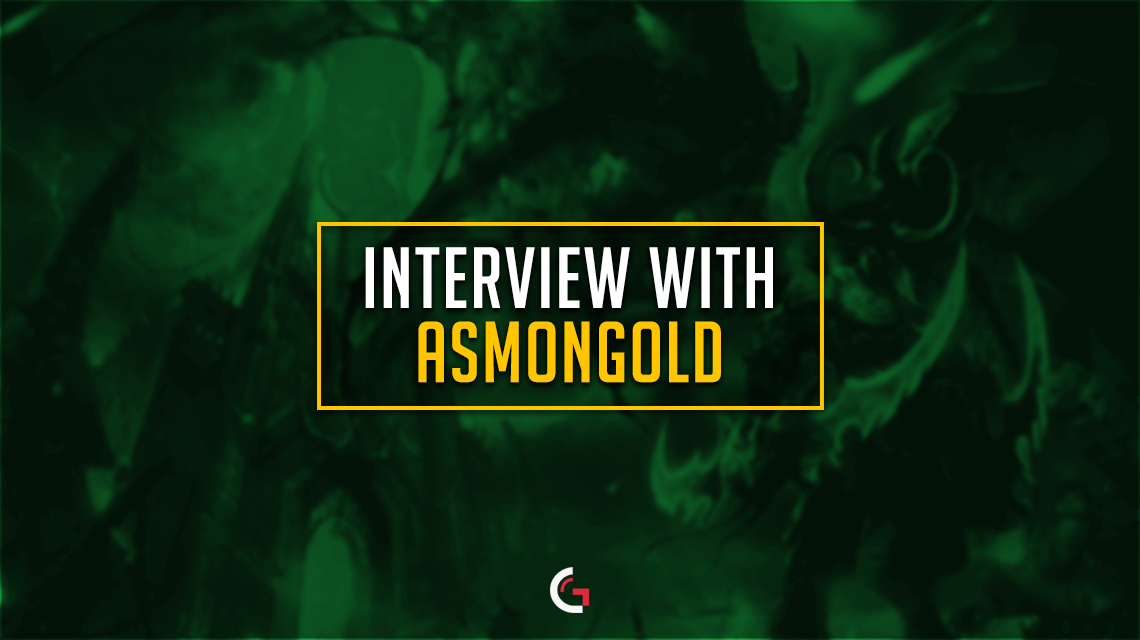 We sat down with Zack, also known as Asmongold, a famous World of Warcraft streamer and content creator, who always tries to entertain and educate us on his gaming endeavours. Find out more below.

Asmongold: You know the way I always describe myself in one of these is professional neckbeard. I play WoW basically; I make videos about WoW and I stream WoW. I play other games too, but that’s pretty much what I like to do; that’s my main game and that’s pretty much all there is to it.

Asmongold: A lot of people actually ask me this. Usually, I tell them that it’s a long story and I don’t have time to tell them, but since we’re here, I’ll go ahead and let everybody know.

Pretty much the way that it worked is back when I was six or seven, when we were in the backyard or like out in the woods or something, we would make up code names, like “I’m gonna be Master Chief or something like that,” and the one I was using at that point was Asmongold. So throughout the years, I was really into Halo when I was younger, so I was trying to put a name on a Spartan like myspace, or in World of Warcraft when I started, and obviously that was taken, but the one name that was never taken was Asmongold. Ever since I was seven, I have used this name, and it stuck because it’s a completely original name, so that’s pretty much how I got it.

You have been playing World of Warcraft like forever? How did you pick it up and what do you like most about it?

Asmongold: My story of beginning World of Warcraft is the same as most kids’ story with drug addiction. It was in a computer class back in the day and I had a kid that basically offered to sell me the game for like $20, and at that point, I didn’t really know I was like 16, and $20 is kind of a good amount of money. Actually, it was $15 at that point, so after he pressured me about it, I finally bought this game.

I put it on my bookshelf and I never thought about it until the summer when my friend Zack, who came over while I was playing Halo, looked at my bookshelf and said “World of Warcraft? What are we playing Halo for? We need to play this game.” This was in the summer of 2006, July if I remember correctly, and so ever since, he and I have been playing the game together along with a lot of other real-life friends. I pretty much have played consistently ever since then apart from a few months when I was playing Diablo and also maybe a month with Overwatch and Path of Exile too, but that’s about it.

What is your favourite class? Which class would you add to the game and why?

Asmongold: It might come as a surprise to the people but my favourite class is Warrior. I’ve played a Warrior ever since 2006 and it’s been awesome ever since then. It’s had its ups and downs, of course, but through the most part, I’ve enjoyed it definitely, and if I was going to add any sort of a class, I would probably add a Necromancer. I think that would be really cool; I think it would be a combination of a Hunter and a Demonology Warlock, like if you had a Death Knight and he always had out an Army of the Dead. I just feel that this would be really fun to play with, I don’t know how much fun it would be to play against, but it would definitely be an interesting addition to the game.

You are in charge of making some changes in World of Warcraft. What would you change?

Asmongold: I would probably change all the raid difficulties and I would have the easier raids fullfill the same function as the LFR mode and people would feel like moving forward in content, not just repeating it over and over. I always felt like that was a negative point in WoW and ever since they’ve done that, I think it diminishes the achievement of like killing a boss once you’ve already killed it in an easier difficulty, so it would probably be that.

So how’s the streaming life? Did you ever believe, in your early gaming days, that you would have such a big audience cheering for you? How does it feel?

Asmongold: I’ve never really thought about it, honestly, even now I don’t think about it. I just think about getting on my stream and making content for people and just having a good time. I don’t really look at it, like being a big streamer, a small streamer, a medium streamer, or anything like that. There are people that like watching me, and I’m really thankful for that and I enjoy it every time.

Obviously, sometimes it can get stressful, especially if I have to do other things at the same time, like make videos or do things in real life. I have people wanting to come over or whatever else, and so all these things I have to juggle around and this is sometimes kind of stressful, but ultimately, I am really thankful for it, I really enjoy everytime that I do it basically.

Asmongold: If there’s a secret, there’s like one sentence or phrase “Oh, you just do this and that’s it?” Obviously, everybody would do it. I think there are a lot different ways to look at it and different types of ideas you can go into streaming with and then making content with, then when you do that, you will probably do better than people who didn’t go in there with those ideas.

My best advice to people trying to create content online or do anything like that is to try to do two things. This is what I’m trying to do with my videos, is to educate and entertain and more than that, and what I really want to say to people, is to make sure that when watching your stream or videos, they end better off than where they started. If you give that to people, you’re definitely on the road to success.

What are your goals for this year and maybe the first months of the upcoming year?

Asmongold: To be honest, I do not tell people my goals and I’ll tell you why. Telling someone your goals gives you the psychological feeling that you will complete that goal, and so I don’t tell people whatever my real goals are. My goals are always a general idea, to do as much as I can, as better as I can, to stream more, make more content, get more viewers, get more subscribers; that’s always what it is. And in WoW, get more purples or more legendary gear. I mean come on, that’s what this is all about.

Asmongold: Well, I think that the first thing I would tell people if they were aspiring to be like me, is don’t be like me. If you try to be like somebody else, the best thing you can be is somebody else. You want to try be yourself and you want to try to make your own content. Now there are a lot of people that I would look at and say “This guy is making a really great job,” presenting content, doing things, exactly the right way of saying words, being clever at the right times and anything like that. So I look at those people and I say “What can I take from what they do and incorporate that into what I do?” But I would recommend to anybody out there trying to make content online, do not try to be like someone else; try to be yourself, if you want to be successful, you have to be yourself.

Okay let’s proceed to the serious questions of this interview. When will you shave your beard?

Asmongold: So the reason I don’t shave my beard is, yeah I do think I look better with the beard and hopefully nobody sees me without one, but also I’m lazy. I mean it’s easier to just have the beard. If I go like five or six days, and I’m like clean shaven, it will look obvious that I’m not shaved, but if I go like five or six days with having a beard and I haven’t shaved, it just looks that I have a beard, so it’s kind of, if nothing else, a way to save time. It sounds kind of ridiculous but that’s pretty much the way that I’ve always looked at it.

Asmongold: Ah… I went to Taco Bell yesterday and I went to Burger King two days ago. [deep thinking]… I think I’m going to go with Taco Bell, and there are a lot of reasons for that. So a large soft drink at Burger King is only 32 oz and an extra large, which is ten cents more than the large one, at Taco Bell is 44 oz, so you get more for what you pay for. Also, I have been going to Taco Bell much longer than I’ve been going to Burger King. My mom would take me to Taco Bell whenever I would do well on a spelling test, which is basically never, so you know I have a lot of good memories from Taco Bell.

Asmongold: Well I don’t know, maybe the faction that I’ve played for a decade, definitely “For the Alliance.”

Asmongold: Shoutouts, oh well yeah, there is this one guy on YouTube, he really does a good job, I’ve been watching him for a really long time, and his name is Asmongold. He makes really really good content on YouTube and also on Twitch, <a href="https://www.twitch.tv/asmongold" target="blank”>twitch.tv/asmongold and <a href="https://www.youtube.com/c/asmongold" target="blank”>youtube.com/asmongold so yeah I would say definitely that guy.

Never heard of him

Asmongold: Oh well yeah, you know, he’s not that good, but we’re trying to help him out.

Thank you for your time Asmongold.

What do you think about what Asmongold had to say? Let us know by commenting below or tweeting us @GAMURScom.