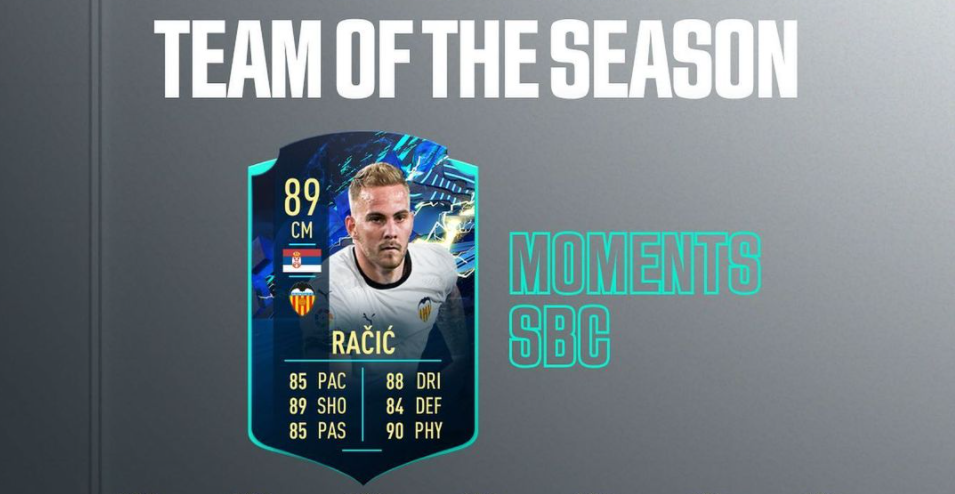 EA Sports added an 89-rated Team of the Season (TOTS) Moments version of Uroš Račić from Valencia to FIFA 21 Ultimate Team on May 9. It can be obtained by completing a set of squad-building challenges (SBC).

This is Račić’s first special card. He’s part of the LaLiga TOTS promotion. TOTS celebrates and highlights the best players who had a large impact on their respective clubs in the different leagues across Europe. Player Moments cards are used to celebrate a special match or season that a specific player had in the past. EA created this Player Moments card to celebrate Račić’s stunning finesse goal against Atlético de Madrid.

This is a good card with balanced skills. TOTS Moments Račić has three-star skill moves and a five-star weak foot. You can further elevate his quality by applying the shadow chemistry style, which will increase his Pace (+8) and Defending (+8), maximizing his Sprint Speed.

This SBC costs around 119,550 FUT coins on Xbox One, 120,400 on PlayStation 4, and 143,800 on PC. The price is fair for this card, but it still doesn’t have anything too special to justify spending your fodder on it unless it fits your playstyle. If you want to complete the TOTS Moments Račić SBC, you’ll need to turn in just one 85-rated squad with 65 chemistry minimum, two Inform cards, and at least one player from LaLiga.

Here’s the cheapest solution to complete TOTS Moments Uroš Račić currently, according to FUTBIN, a website that specializes in FIFA content: