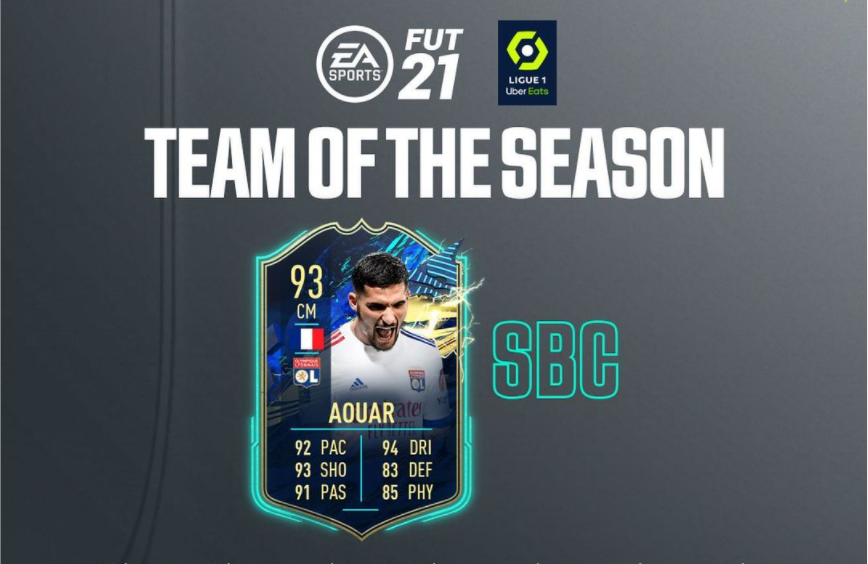 This 93-rated French midfielder has been added as a part of the Ligue 1 TOTS promo that started today. This is the third special card Aouar has received throughout the FIFA 21 Ultimate Team cycle. He gained an 86-rated FUT Freeze version in December and a 90-rated FUT Birthday card in April.

EA boosted all of Aouar’s stats when you compare this TOTS card to his 90-rated FUT Birthday version, including Defending (+8), Physical (+5), Dribbling (+3), Passing (+3), Shooting (+3), and Pace (+2). This card is well-suited if you’re in need of a box-to-box midfielder since it has enough Defending attributes and also has four-star skill moves and weak foot, which will help you when attacking.

You can further boost TOTS Aouar’s stats with the correct chemistry style, which is either the shadow or anchor. It depends if you want more Pace and Defending, rather than sacrificing a bit of both to also enhance his Physical. But you can literally play him as a center-attacking midfielder (CAM) or striker (ST) if you want to. If that’s the case, you can boost his attacking attributes with the hawk chemistry style.

The TOTS Aouar SBC costs around 266,000 FUT coins on Xbox, 277,000 FUT coins on PlayStation, and is slightly more expensive on PC (320,000 FUT coins), which is still good value if you build it from scratch. Since Aouar is French, you’ll have plenty of quality options to link him, such as 97-rated TOTS Karim Benzema from Real Madrid and 93-rated Kingsley Coman from Bayern, if you don’t have cards from the Ligue 1 in your starting 11.

Here’s the cheapest solution to complete the TOTS Aouar SBC right now, according to FUTBIN, a website that specializes in FIFA content.