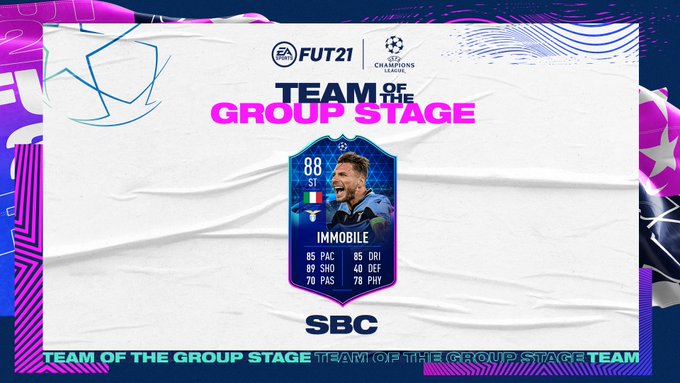 EA Sports added an 88-rated Team of the Group Stage (TOTGS) version of Ciro Immobile from Lazio to FIFA 21 today. This item is available through the squad-building challenge (SBC) menu in FIFA 21 Ultimate Team.

This is Immobile’s first special card in FIFA 21 Ultimate Team. The Italian striker hasn’t earned a Team of the Week (TOTW) version or been part of any FUT promo until today.

EA has barely upgraded Immobile’s stats—Passing (+3), Physical (+1), Shooting (+1), Dribbling (+1), and Pace (+1)—when you compare this card to his 87-rated gold version. While SBC cards tend to highly increase stats, players will notice almost no difference with this version of Immobile.

TOTGS Immobile costs around 83,950 FUT coins on PlayStation 4 and has a slightly higher price on Xbox One (88,400) and PC (88,350). The SBC price isn’t terrible, but TOTGS Immobile definitely isn’t a meta card because of his lack of Acceleration.

If you can play without a Pacey striker, TOTGS Immobile can be a good asset for your Ultimate Team, though. You can link him to cards such as 88-rated Paulo Dybala from Piemonte Calcio, 88-rated Alejandro Gõmez from Atalanta, and 87-rated Rulebreakers Lukaku from Internazionale.

Here’s the cheapest solution to complete the TOTGS Ciro Immobile SBC right now, according to FUTBIN, a website that specializes in FIFA content: