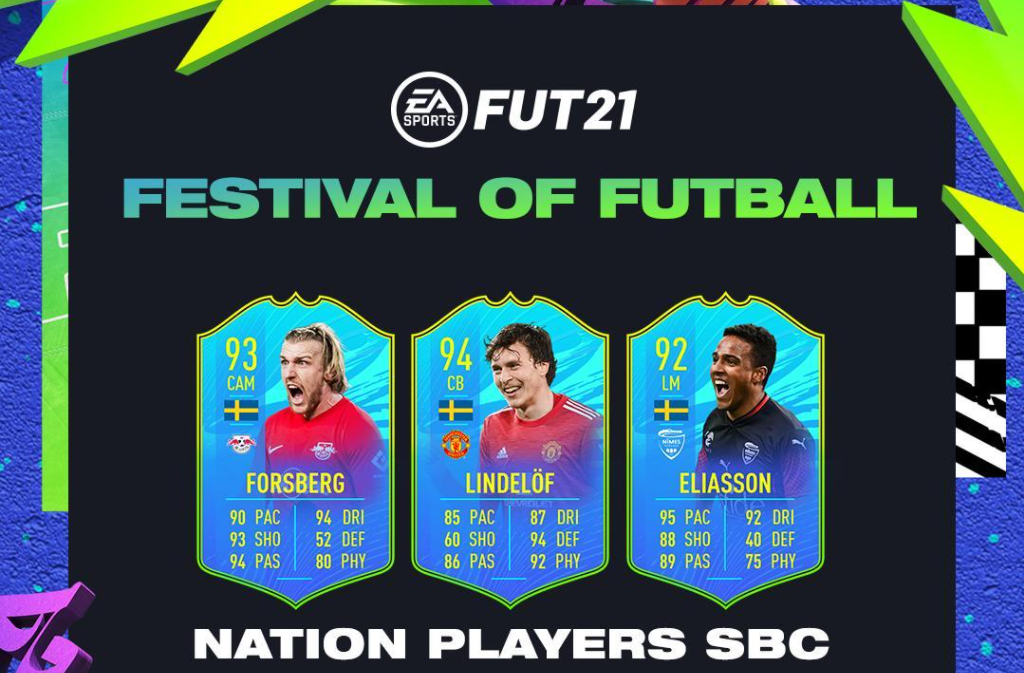 EA Sports has added a new set of squad-building challenges (SBCs) to FIFA 21 Ultimate Team that will reward players who complete it with three new Festival of FUTball versions of players: 94-rated Victor Lindelöf from Manchester United, 93-rated Emil Forsberg from RB Leipzig, and 92-rated Niclas Eliasson from Nîmes Olympique.

You’ll have to turn in one squad per player, but it’s not obligatory to complete all three if you don’t want to. Let’s say you only want Lindelöf and Forsberg. All you have to do is complete their two respective segments. But if you complete all three, you’ll be rewarded with a prime gold players pack.

All the items from the Sweden Nation Players SBC are untradeable, which means you can’t sell the special cards and the items you get from the pack on the FUT market to make a profit. The SBC will be available until next Wednesday, June 21 at 12pm CT.

Eliasson was the player who received the most upgrades since this is his first special card in FIFA 21 Ultimate Team. His only other version was a 72-rated silver one. EA upgraded his Shooting (+31), Physical (+24), Passing (+21), Dribbling (+17), Pace (+10), and Defending (+3). The devs also changed his position from RM to LM and he becomes a 95-rated winger, according to FUTBIN, a website that specializes in FIFA content, when you apply the marksman chemistry style, which will enhance his Shooting, Dribbling, and Physical stats even further.

This is also the first special card that Lindelöf has received in this edition of FIFA. EA boosted all of his stats including Physical (+15), Passing (+14), Dribbling (+14), Defending (+13), and Pace (+13), and Shooting (+10) when you compare this Festival of FUTball 94-rated card with Lindelöf’s 80-rated gold card. The most recommended chemistry style for this card is the shadow since it’ll maximize almost all of his Defending stats and boost his Acceleration and Sprint Speed to 93-rated and 97-rated, respectively. The shadow chemistry style transforms Lindelöf into a 97-rated center back, according to FUTBIN.

As for Forsberg, he received an 86-rated Player Moments version back in November 2020 in the early stages of FIFA 21 Ultimate Team. EA enhanced his Shooting (+22), Defending (+20), Pace (+20), Physical (+19), Dribbling (+13), and Passing (+13) when you compare his 93-rated Festival of FUTball card with his regular 79-rated gold card. The most appropriate chemistry style for him is arguably the hawk, which will boost his Pace, Shooting, and Physical stats even more and will transform him into a 96-rated player, according to FUTBIN.

The best part of this Sweden Nation Players SBC is that you can link all three players together if you have a couple of Icon players on your squad. EA is asking for a 84-rated squad with 75 chemistry minimum, at least one Ligue 1 card, and one Inform or Team of the Season (TOTS) player for Eliasson and an 85-rated team with a minimum of 60 chemistry, at least one Bundesliga player, and one Inform or TOTS item for Forsberg. Lindelöf, on the other hand, is the most expensive. His segment asks for an 86-rated team with 65 chemistry minimum, two Informs or TOTS cards, and at least one player from the Premier League.

Here’s the cheapest solution to complete the Sweden Nation Players SBC in FIFA 21 Ultimate Team right now, according to FUTBIN.