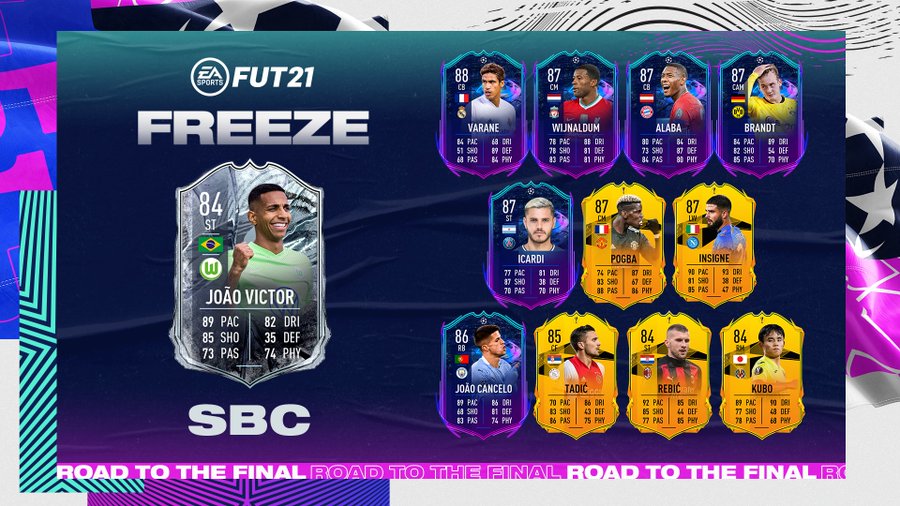 EA Sports added an 85-rated FUT Freeze version of João Victor from VfL Wolfsburg to FIFA 21 today. This item will be available through the squad-building challenge (SBC) menu in FIFA 21 Ultimate Team.

This is João Victor’s first special card in FIFA 21 Ultimate Team. EA has switched his position from left midfielder to a striker and made massive changes to his stats, including Physical (+15), Shooting (+13), Passing (+6), Pace (+5), Dribbling (+5), and Defending (+4), when you compare this card to his 75-rated gold version. You’ll have until Dec. 30 to get this card.

FUT Freeze João Victor costs around 140,400 FUT coins on PlayStation 4 and has a higher price on Xbox One (141,750) and PC (161,700). EA focused on changing his Physical and Shooting considering his new position and he still has great Pace. You can apply the marksman chemistry style to increase his Dribbling (+8), Shooting (+8), and Physical (+5) even more.

This card looks great, especially because of FUT Freeze João Victor’s four-star skill moves and five-star weak foot. The SBC, however, is a bit overpriced because you can find similar players for cheaper on the FUT Market. Since he’s Brazilian, there are plenty of good players to use around him, such as Neymar from Paris Saint-Germain and Rulebreakers Douglas Costa from Bayern Munich.

Here’s the cheapest solution to complete the FUT Freeze João Victor SBC right now, according to FUTBIN, a website that specializes in FIFA content: