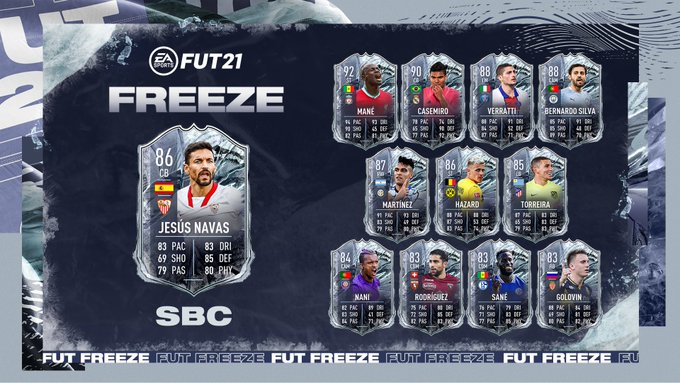 EA Sports added an 86-rated FUT Freeze version of Jesús Navas from Sevilla to FIFA 21 today. This item is available through the squad-building challenge (SBC) menu in FIFA 21 Ultimate Team.

This is Navas’ first special card in FIFA 21 Ultimate Team. EA has changed his position from right back to center back and upgraded his Physical (+22) and Defending (+5) stats, keeping his other skills untouched except for Pace (-4) when you compare this card to his 84-rated gold version. You’ll have until Dec. 24 to get this card.

FUT Freeze Navas costs around 136,520 FUT coins on PlayStation 4 and has a higher price on Xbox One (147,750) and PC (155,200). EA focused on giving Navas defending skills considering his new position, leaving his Shooting and Passing at a low rate. You can use him more effectively by applying the anchor chemistry style, which will boost his Pace, Defending, and Physical stats even more.

FUT Freeze Navas is a good option if you like playing with pacey defenders. He’s agile but also short, so we’d advise you to pair him alongside some tall center backs to compensate, such as Raphaël Varane 86-rated from Real Madrid or Team of the Group Stage (TOTGS) Diego Carlos 85-rated from Sevilla.

Here’s the cheapest solution to complete the FUT Freeze Jesús Navas SBC right now, according to FUTBIN, a website that specializes in FIFA content: