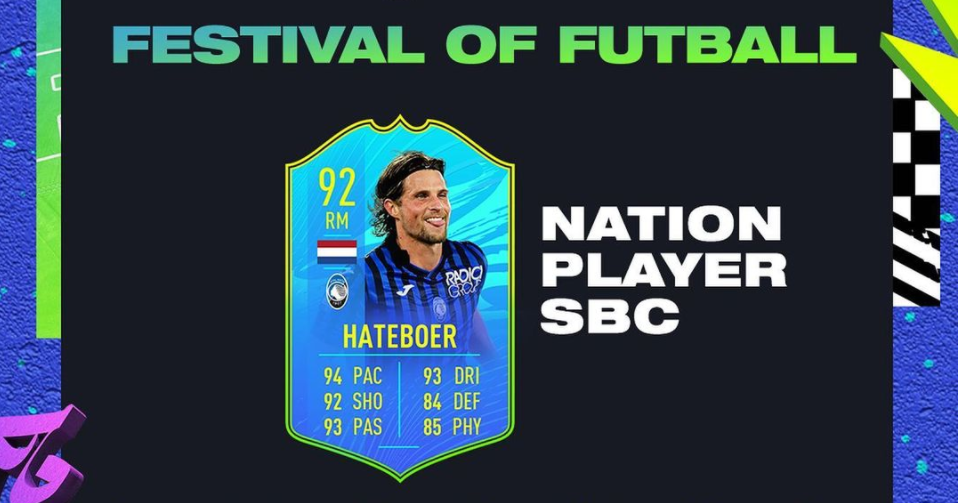 EA Sports added a 92-rated Festival of FUTball (FOF) Nation Player version of Hans Hateboer from Atalanta to FIFA 21 on Sunday, June 20. This item is available through the squad-building challenge (SBC) menu in FIFA 21 Ultimate Team.

This is Hateboer’s first special card in FIFA 21 Ultimate Team. He’s the first player from the Netherlands in the FOF Nation Player promo, which is different from the Path to Glory promo. This card won’t receive an upgrade depending on how many wins the Dutch national team gets during the Euro World Cup.

This is an incredible card. All of his stats are extremely high since all of them are above the 80-rated mark. His highest skills are his 94-rated Pace and 93-rated Dribbling and Passing. This card is even better if you consider his four-star skill moves and weak foot, which make him a well-rounded player.

You can further increase his Defending (+7), Physical (+7), and Pace (+4) by applying the anchor chemistry style, which will make all of Hateboer’s skills be above 90 and maximize his Sprint Speed. That will take this card to another level.

FOF Nation Player Hateboer costs around 120,900 FUT coins on PlayStation, 126,450 on Xbox, and is a bit more expensive on PC (148,850 FUT coins). This is an unbelievably good card for this low price. And aside from the previously mentioned qualities, he can make a strong link with legendary Dutch players and other incredible cards such as 93-rated TOTS Muriel, 92-rated TOTS De Vrij, and 91-rated TOTS Ilicic.

If you’re interested in completing this SBC, you have until June 25 to turn in just one 86-rated squad with 55 chemistry minimum and at least one player from the Netherlands.