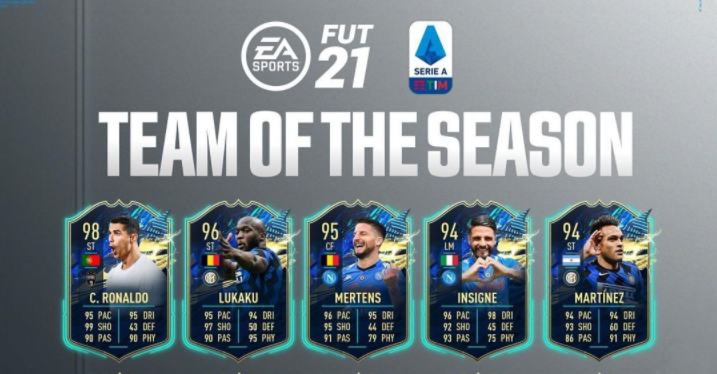 EA Sports added the Seria A Team of the Season (TOTS) to FIFA 21 Ultimate Team today.

The team has 15 players in total. The highest-rated players include 98-rated Cristiano Ronaldo from Piemonte Calcio, 96-rated Romaelu Lukaku from Internazionale, 95-rated Dries Mertens from Napoli, and 94-rated Lorenzo Insigne from Napoli.

This is equivalent to the Bundesliga TOTS team released last week and will be replacing it for this week. Almost all of the cards are incredible players. The official Series A TOTS team’s highest-rated player is 98-rated Cristiano Ronaldo, while the lowest is 88-rated Domenico Berardi, which is still a great card. You can now get one of these 15 players in FUT packs for a limited time.

Here are all the Serie A TOTS players who were added to FIFA 21 Ultimate Team today.