Dota 2 fans can expect a bump in the prize pool of the International 10 because Valve just shipped Immortal Treasure two to all the Battle Pass owners.

If you’ve already progressed enough through the TI10 Battle Pass and had unlocked Immortal Treasure twos, you should find them ready for an unboxing in the Armory. 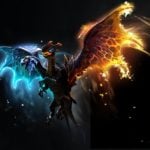 The lucky winners of the hat lottery for the treasure are Magnus, Slardar, Troll Warlord, Sven, Silencer, and Witch Doctor.

Each treasure also features a rare set of blazing wings for Jakiro, a very rare Golden version of the Slardar and Witch Doctor immortal. Support players can also cross their fingers for an ultra-rare Ursa cub carrier, while there’s also a slight chance you’ll discover a Divine Emblem.

Like most treasures, the second Immortal Treasure also uses the pseudo randomization system, meaning that your chance of unlocking one of the rarer items will increase for each treasure that you don’t get one of them.

You’ll have to advance through the Battle Pass through questing, or buying levels to unlock more Immortal Treasures.