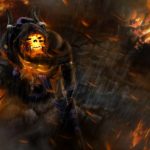 Valve pushed out the 7.27b update for Dota 2 last week. It was followed by 7.27c to fix some of the issues surrounding the metagame that were introduced with Patch 7.27.

The changes that arrived with version 7.27 didn’t cause the second coming of the infamous death ball meta, but the game was in a slightly awkward spot. The meta favored hyper aggression and fighting during the early game. Simultaneously, the importance of the second tier towers suddenly slowed the game down, forcing players to go back to farming.

Carries who could fight during the early game, like Wraith King, became the stars of the patch, alongside other heroes that preferred building a Radiance as one of their core items. Patches 7.27b and 7.27c brought enough changes to shake up the meta a bit but may have introduced new villains in the process.

Wraith King has been one of the stable picks in the meta for a while. The hero’s durability, reliability, and massive damage output potential made him one of the first picks in most games. His reign was interrupted with 7.27b, however, due to the following nerfs.

7.27b changes of Wraith King

These nerfs caused Wraith King to lose his passive damage from his lifesteal and his base damage increase by three is nowhere enough to make up for its absence. His Mortal Strike was buffed, in exchange, which indicates that IceFrog might be trying to change the way Wraith King is played.

The above changes lowered the hero’s win rate by three percent, according to Dotabuff. And that trend may continue since players will be figuring out the patch even further in the following days.

Ursa was one of the few heroes that was profoundly affected by the changes they received. Before receiving the following alterations, Ursa was almost too easy to play in public matches and felt like he was broken in terms of balance.

His easy itemization process and attributes that make him almost impossible to play against turned him into a nightmare to handle. He didn’t receive that much love from the competitive scene, however, since drafting a kiting lineup against him almost rendered his potential useless.

These nerfs impacted Ursa’s effectiveness in fights and his farming speed was taken down a notch as well. The latest iteration of Earthshock also leaves more room for counterplay since anyone that Ursa chases will have a four-second window in which they won’t be slowed.

Clinkz is potentially both the biggest winner and loser of these two patches. The hero had a short dominant period until IceFrog realized he may have been too generous with him and took back everything he said with Patch 7.27c.

We’ll go over the adjustments from both patches in a chronological order to understand the process.

The above buffs basically brought back the good old Clinkz that hit like a truck. Almost all of his talents were also adjusted to compliment his new powers, which made his win rate skyrocket from 50 percent to 56 percent, according to Dotabuff.

The following nerfs were issued only a couple of days after Clinkz became a top-tier hero again and adjusted his win rate as a result.

These changes didn’t affect Clinkz’s kit in any way but made him easier to play around. Despite losing the majority of his hammers to the second coming of the nerf bat, Clinkz is still a powerful hero and now rocks a win rate of 53 percent at time of writing.

By looking at the changes alone, it may be hard to understand what’s so different about the new Rubick. But the changes that the hero received with 7.27b essentially opened up an alternative way of playing him.

With Rubick able to steal damage with the level 15 talent, this hero can become a carry in the right hands. These changes can’t be considered either buffs or nerfs, though. Players will simply need to wait for him to get picked in professional matches to see his true potential. Even before the adjustments, we’ve seen some examples of mid lane Rubicks building Desolator, which has become an even more deadly strategy.

These changes had a minimal effect on the hero’s win rate, upping it only by one percent. But he might be the current sleeper of the current patch.

Before 7.27b, Underlord had a reasonably mediocre place in the meta. He was strong in the right hands, but he didn’t have his old mojo that made him a considerable threat.

The following buffs suddenly turned him into a top-tier pick. Underlord was back in the spotlight once again with a win rate jumping from 51 percent to 59 percent.

7.27b changes of Underlord

These changes directly improved Underlord’s kit. He also received early-game talent changes that made him even tankier. With a more robust kit and tankier stats, Underlord became almost impossible to deal with for fragile supports. But he received the short end of the stick with 7.27c.

The second reconsideration of his kit decreased its overall power but still allowed Underlord to keep his new level of tankiness. Patch 7.27c was only able to bring Underlord’s win rate down by 2.5 percent. He’s now sitting with a 56.60 percent win rate at time of writing.

While other heroes like Bloodseeker also received some impactful changes, it looks like they’ll still need some time to find their places in the meta. As more heroes get nerfed, others will thrive. Competitive Dota 2 players will always be on the lookout to pick what gives them the best odds of winning.