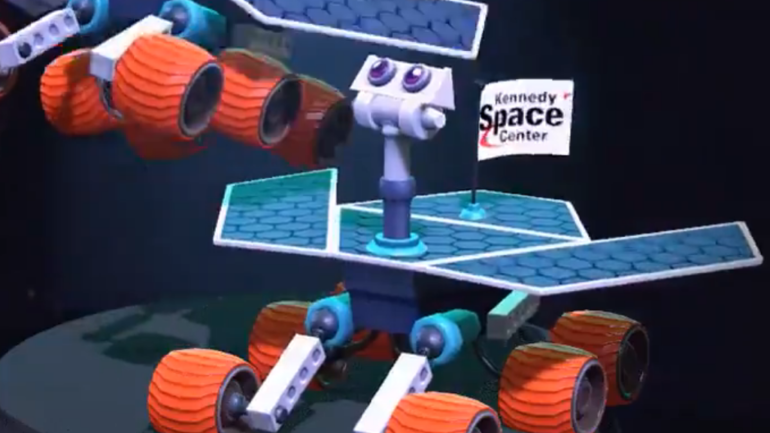 Midas Mode 2.0 was already set to be a wild Dota 2 event that pits top teams against each other with a list of bounties to complete. But now, the tournament organizers have brought the Mars Opportunity rover home—sort of.

The rover, commonly referred to as Oppy, went dark in June 2018 following a Mars dust storm, thus ending its record-setting 15-year exploration of the red planet. But thanks to Jake “SirActionSlacks” Kanner and designers Michael “HawtKoffee” Shilliday and “ToFoQc,” the robot will act as the official courier for Midas Mode.

This cartoony version of Oppy is going to be bringing items across the map for all teams playing in the tournament.

This is an extremely cool idea and it was directly approved by Kennedy Space Center Visitor Complex, according to Slacks. In his video talking about Oppy roaming the maps, he mentioned that this is a celebration of the complex.

And while there are no details on the “sponsorship,” a flag featuring the complex’s logo is featured on the back of Oppy’s in-game model.

Slacks said there will only be one version of the courier for both Dire and Radiant teams “because Discovery can never be evil or good. It is there for science and the future of humanity alone.”

Originally, Oppy was only supposed to survive 90 Martian days before shutting down. Instead, it lasted 60 times that and traveled more than 28 miles until finally coming to rest in what’s known as Perseverance Valley.

But now, the Mars rover will be running around the Dota 2 map while all the other shenanigans are going on during Midas Mode 2.0, which runs from Oct. 24 to Sept. 2.