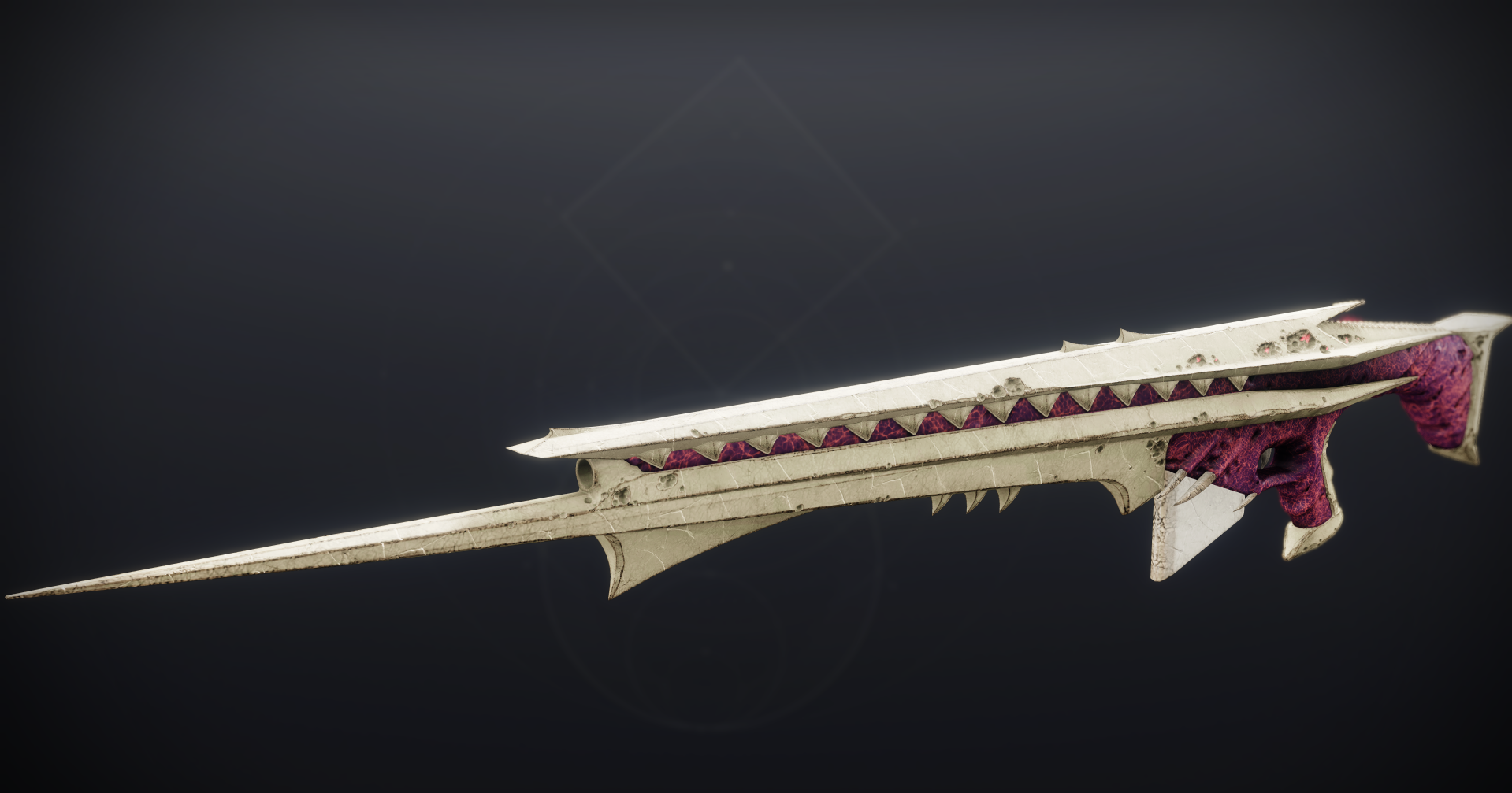 With each year of Destiny 2 seasons and expansions that passes, new sniper rifles enter the loot pool to compete for the top spot in boss damage numbers and Crucible viability. Defiance of Yasmin, a sniper rifle returning to Destiny in the refurbished King’s Fall raid, looks like it could very much take the throne with a monster set of perks that few other sniper rifles can compete with.

It’s a 90 RPM Adaptive frame, nestling it comfortably between the high DPS but low damage output of Rapid-Fire frames and the high damage output but low DPS of Aggressive frames. Its balanced output allows it to shine in boss encounters with extended damage phases, and its origin trait—Runneth Over—provides a free magazine overflow upon reloading near allies and limits the downtime in your damage dealing as well.

Runneth Over alone can bring Defiance of Yasmin into the conversation, but what really sets it apart is its perk combinations. With both Firing Line and Vorpal Weapon available in the second column, it has great options for both solo and group play. Ensemble is here too in the first column, which perfectly synergizes with Firing Line and Runneth Over to empower Defiance of Yasmin in almost every aspect necessary to deal massive damage against a boss. While its overflowed magazine can’t compete with the traditional boost the Overflow perk provides, being able to overflow it at all without requiring usage of a perk slot is a unique boon.

There’s a lot to love with Defiance of Yasmin, in not only what it can bring to PvE but PvP as well with the right roll. Here are our god rolls for the King’s Fall sniper rifle that should bring out the best in whatever environment it’s brought into.

Defiance of Yasmin god rolls and best perks in Destiny 2

When looking at Defiance of Yasmin in PvE, it’s hard to compete against that potent Ensemble and Firing Line combination. While the use case for such a god roll is limited to encounters with a lot of teammates grouped together and a large target to put damage into, Defiance of Yasmin is one of the most well-equipped special weapons in Destiny 2 for said encounters. However, for those looking to make use of it in solo play, Vorpal Weapon and Focused Fury’s presence here beside Lead From Gold makes for a great substitute roll.

With all the praise and spotlight on its PvE potential, it can be easy to miss that Defiance of Yasmin also has some of the best rolls you could hope for from a PvP sniper rifle. It’s rare to see Snapshot Sights in a perk column separate from Opening Shot and Moving Target on the same weapon, with players often forced to choose one over the other. No such choice is needed with Defiance of Yasmin, as Snapshot Sights can be combined with both aim assist-boosting perks for maximum consistency in the Crucible.

There’s a lot to love with this sniper rifle, but even beyond its ideal rolls lays a treasure trove of additional perk choices and combinations that can cater to both niche playstyles and specific preferences other players may have.

Ensemble and Shoot To Loot

When it comes to building a roll of Defiance of Yasmin fit for endgame activities and raid boss encounters, Ensemble and Shoot To Loot are vying for the top spot in the first perk column. While Ensemble’s bonuses are more readily apparent, sizably boosting both handling and reload speed, Shoot To Loot instead offers safety.

Being able to shoot bricks of special ammo to reload weapons from reserves from a distance during a time-sensitive encounter can offer essential additional seconds to keep doing damage. On top of that, tackling the likes of Grandmaster Nightfalls or Master-difficulty raids is much easier when you aren’t risking life and limb to pick up precious ammo bricks that have dropped in the middle of a group of combatants.

Lead From Gold is a nice PvE alternative to take up in this column if you find yourself on the receiving end of bad luck when it comes to special ammo drops. Defiance of Yasmin will inherently burn through the majority of its ammo reserves during any extended damage phase, so the knowledge that even a heavy ammo brick will provide ammo to this weapon as well can make those encounters significantly less risky.

The go-to perk for many PvP players, Snapshot Sights continues to be reliable for players who prefer a quicker scope, able to hit the first shot of a fight before they can be flinched off target. The fact that neither Moving Target nor Opening Shot needs to be sacrificed in order to take Snapshot Sights on Defiance of Yasmin is one of the main selling points of this weapon, and it will no doubt be a common sight in Crucible soon enough.

Firefly isn’t a typical choice for this column, but there are some niche rolls that it can work with here for some fun and unique playstyles. Pairing Firefly with Demolitionist immediately comes to mind, with the explosions capable of deleting large groups of enemies that all count into Demolitionist’s ability to generate grenade energy. Daring players might even combine Firefly with a PvP perk in the second column, looking to potentially weasel away additional kills on players that stand too close to one another when hitting the opening headshot. It’s not a traditional way to make use of a sniper rifle, but it can certainly get results.

While the bonus damage that Defiance of Yasmin has as a kinetic sniper rifle is part of its appeal, Osmosis is there if you want to be able to make use of Font of Might. Elemental Well mods have risen to prominence in recent seasons after the 3.0 reworks to the Light subclasses, and allowing Defiance of Yasmin to contribute to those builds through Osmosis can prove perfect for players that enjoy such a playstyle.

No Distractions is more than likely the weakest perk choice in this column, but can still be a good alternative PvP perk if Snapshot Sights does not appeal to your playstyle. The flinch reduction can be a handy tool in a PvP meta where long-range options such as High-Impact pulse rifles and Dead Man’s Tale currently exist to contend with sniper rifles.

Firing Line’s provision of 20 percent bonus precision damage when standing near two or more allies makes it perfectly suited to the majority of boss encounters in Destiny 2. It’s a damage boost that’s nothing to scoff at, with very few perks able to offer increases even close in comparison. While its activation requirements means its functionality is limited to those encounters, having a roll in your vault with Firing Line for raiding is a necessity for any hardcore endgame Guardian.

Vorpal Weapon and Focused Fury are your two alternative perk choices when taking Defiance of Yasmin into either solo content or content where Firing Line is harder to activate. Both similarly provide decent damage boosts to the weapon, perfect for killing Champions during seasons where anti-Champion mods exist for sniper rifles. It also stacks well with the 10 percent damage increase Defiance of Yasmin already has as a kinetic sniper rifle.

Demolitionist can at first seem like an odd choice of perk for this column and this weapon, but its ability to generate grenade energy is a useful tool in any situation. Combining it with Firefly or Osmosis can turn Defiance of Yasmin into more of a weapon of utility than a damage dealer, providing for a grenade build in lower-difficulty content.

Moving Target and Opening Shot are the two classics of a PvP roll for any sniper rifle, offering significant boosts to the all-important aim assist stat that can give any player a bit more leeway when aiming for the headshot on their opponent. While it’s up to personal preference on which one you may wish to pick for your god roll, Opening Shot’s boosts to aim assist, accuracy, and range are far greater than that of Moving Target’s. When one shot is all you need in an ideal scenario, many players will gravitate toward utilizing Opening Shot in their perfect build.

Slickdraw struggles to leave an impression in the face of many traditional and consistently successful other perk choices for PvP present here. Significantly increased handling can allow you to ready Defiance of Yasmin before your opponents can draw on you, but the negative impact to target acquisition can make the first shot in the fight you now have much harder to successfully land. This is a perk that only players confident in their shot should look into experimenting with.