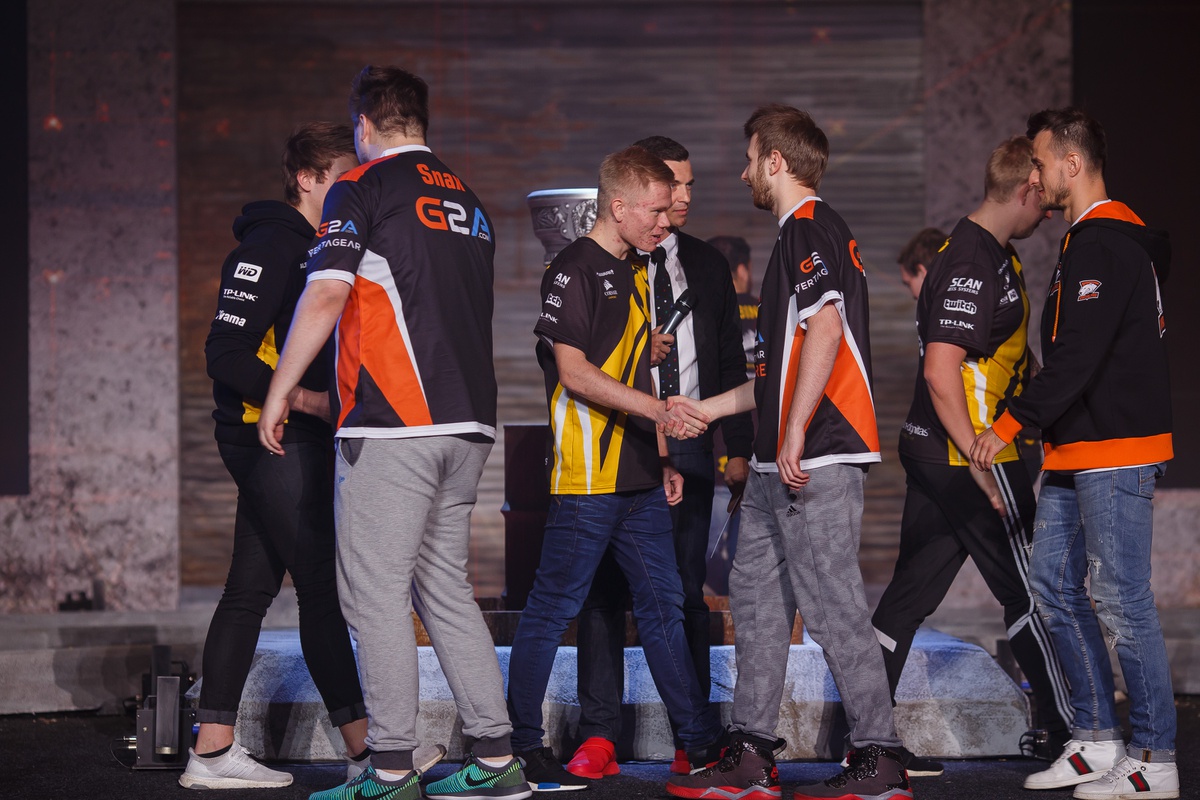 After winning their respective groups at IEM XI Oakland, Astralis and FaZe each earned two days off until their next matches, which will be the semifinals. What they and many others may not know, though, is that no team in Counter-Strike who has ever followed their path through that tournament format has ever gone on to win the title

On three occasions in CS 1.6 and three in CS:GO, the two teams who have skipped to the semifinals have in every instance failed to leave the event as champions, with the vast majority failing to even progress to the final. The curse of the group champion, in this format, is very much real.

This format, with large group stages of six teams in each and the top three going through to the play-offs, with the winner of each group skipping directly to the semifinals, was used in three major international competitions in Counter-Strike 1.6. From the fourth season of the Intel Extreme Masters (IEM) finals it was implemented, with then product manager Carmac explaining that the days off gave the media more time to cover the tournament and create content surrounding it.

The IEM IV Global Finals took place in March of 2010 and marked the end of the fourth season of IEM.

lurppis’s North American Evil Geniuses team surprised many by topping a stacked group. In the other group, it was SK Gaming who came out on top, featuring the talents of the newly acquired star Gux. EG would fall to Natus Vincere (Na`Vi), who were on the path of destiny to their first ever major title. SK fell to old rivals FNATIC, Gux’s former team, and f0rest and friends would lose to the aforementioned Na`Vi in the final.

The IEM V World Championship took place in March of 2011 and marked the end of the fifth season of IEM.

mTw had been one of the best teams of 2010, but denied as many placings as they might have otherwise enjoyed due to losing to Na`Vi at every point they met them in brackets. Winning their group put them into the semifinals and they would again meet Na`Vi and again suffer heart-break. SK Gaming again topped their group, this time with now FNATIC player dennis as a stand-in. They would face the Frag Executors team of NEO, TaZ and pasha. After one of the most epic three game series in history, the Poles took the victory and killed SK’s title hopes. In the final, Na`Vi would defeat FX to take their fourth straight major title.

The IEM VI World Championship took place in March of 2012 and marked the end of the sixth season.

SK Gaming topped their group for a third straight year, this time with former mTw star trace in the team, making for one of the most skill stacked lineups in history. They would face ESC.pl, the new name for the Frag Executors lineup, in the semifinal and, as was the pattern in their matchups over the last year, lose in heart-breaking fashion. In the other group, the surprise was THREAT’s Lions team, who managed to steal the top spot. Lions had never won a big international competition and they would not in this instance, losing to Na`Vi. The final was a rematch of the previous year, Na`Vi against the Poles, and this time the result would be the other way around, with the Poles taking the title from the Ukrainians.

This format was not used in CS:GO for big international tournaments until this year, when it became quite popular with organisers.

EPICENTER was held in October of 2016, with a field loaded with top teams.

Na`Vi topped their group in bizarre fashion, losing and winning the same number of maps as every other team in their group, as the stage finished with ties in every series. Na`Vi would face the rising Dignitas, who defeated them in three maps and then rolled on to take the title in similar fashion, winning their first big international tournament.

The ESL Pro League Season 4 Finals took place in late October of 2016, marking the end of the fourth season of Pro League.

mousesports topped what was a depleted and underwhelming group, claiming their second every top four at a big international tournament. They would face Cloud9 and lose in embarrassing fashion. NiP escaped a close battle in the stacked Group B and would face SK Gaming in the semifinal, 2016’s team of the year. SK won in three maps and moved on to the final, where they would surprisingly be defeated by C9 in three maps, with the last two being dominant wins for the NA side.

The IEM X World Championship took place in March of 2016 and marked the end of the tenth season of IEM. Unlike the other tournaments listed in this article, it did not feature a break of any days, but did see the group winners skipping through to the semifinals.

Luminosity, then still a team on the brink of greatness, topped the scary stacked Group A. They would face Na`Vi in the semifinal, one of the classic matchups in the game at that point, and move through a thrilling series to the final. Astralis had yet to fall to the lows of being eliminated in group stages back in March and topped their group, as was tradition for that group of players. They faced FNATIC in the semifinal and the Swedes would defeat them late at night en route to winning yet another tournament that year.

No team to skip directly to the semifinals in a big international Counter-Strike tournament using this format has ever won the tournament.

Why don’t they win?

This pattern was not widely discussed in CS 1.6, perhaps due to a small sample size, and the format has only recently been adopted for CS:GO. I can suggest some possible reasons as to why teams are never able to win the tournament and in nearly all cases lose the semifinal itself.

Firstly, by skipping a day of the tournament the teams rarely if ever have any opportunity to properly practice during their time off. The opponent they will play in the semifinals, on the other hand, played the day before in a real competitive match which had their tournament life at stake, ensuring they play under real competitive conditions. Two days off playing Counter-Strike is a hard reset for a team’s form, individual level and routine. While it does provide more time to potentially prepare for opponents, that is offset by meaning that teams may come in cold to an important tournament match.

Even in the case of the IEM X WC, where there are no days breaks, the team waiting in the semifinal still is not as warmed up as the team who won the quarter-finals. Admittedly, the semifinal team can watch the quarter-final match, which gives them a strategical advantage, but the opponent has already played a match that day and is in their routine.

One must also look at the group stage format and consider the possibility that Best-of-1 group stages are not particularly effective at determining the best team overall. Firstly, there can be scenarios in which teams win the group by virtue of a tie-breaker, so without a convincing record, yet are rewarded the same as a team who win every single group stage game. Group winners are often decided by one of the other teams being upset in a spoiler scenario by a lesser team who have a good or unusual match-up against them, stylistically or map pool-wise.

A Bo1 game win can come down to winning the pistol rounds and then only a couple of key gun rounds. In contrast, a Bo3 series is a much more comprehensive test of a team’s skills and much more rarely sees the underdog coming out on top. The ban system employed in Bo1 group stages is to ban out three maps each, with the remaining map being the one played. As such, the map selected will rarely be a strong one for the teams, unless both like that map, or a weak one for just one of them, since they can ban three weak maps, in theory. Instead, the likelihood, in most instances, is that the map played upon will be in the middle of the map pool for each team. Making for lots of close and contested results.

It’s true that a top team could in theory use the bans to eliminate all the strong maps of their opponent, giving them an advantage, but that advantage is less extreme than in a Bo3 series, where they can be assured of being able to pick at worst their own second best map and thus ensure a map win in the match.

In Dota2, double elimination has famously been used on many occasions, meaning they often have teams skipping matches due to progressing through the shorter upper bracket, while others battle through the lower bracket. Even so, on many occasions there will be teams playing multiple games in the lower bracket at some point, so the toll on them becomes more strenuous and being warmed up veers into being a bit more worn out. That also enhances the upper bracket advantage of having watching your opponent play their recent matches.

It’s also worth nothing that Dota2 rarely uses Bo1 for big tournaments, instead employing full series.

Made for the media

Having a day off after the group stage does benefit the media, who then have the time to provide more in-depth and extensive coverage of the tournament. Interviews with the players have more shelf-life to be consumed by the public, write-ups of the group stage are more likely to be consumed and previews have much more time for their creation and front-page time.

This media benefit is one of the primary reasons for this format becoming employed, as then IEM product manager Carmac had himself been a member of the media only two years prior to IEM adopting the format. Certainly, media members appreciate the advantages it has afforded them. In the past and at more schedule-stacked tournaments, interviews have a very short life-span and can easily be lost late at night and in the rush towards the next match.

Will it happen in Oakland?

With such an ominous history in place, eyes should now be upon the semifinals and beyond in Oakland. Can Astralis defeat the winner of SK vs. G2 to have a chance at taking the title? They were a surprise winner of Group A, but also won their group at ELEAGUE before, having recently added gla1ve as in-game leader.

FaZe took in the very same karrigan that Astralis cast out and have seen a gradual increase in form. They took made it out of their ELEAGUE group, albeit in second, and had some good form at EPL S4, but failed to make the playoffs. At iBUYPOWER Masters the team had some solid results and finished second to qualify for this tournament. Here, they have swept their group without a loss, with only a couple of close matches along the way.

Even if those teams can beat the first part of the curse, moving into the final, as three teams have previously done, winning the tournament sees them facing down a history of all 12 teams who have past skipped to the semifinal all having failed to lift the trophy.

One is left to wonder: if Bo1 group stages which skip the winner to the semifinal are a good format then why does the team who wins the group never win the tournament?