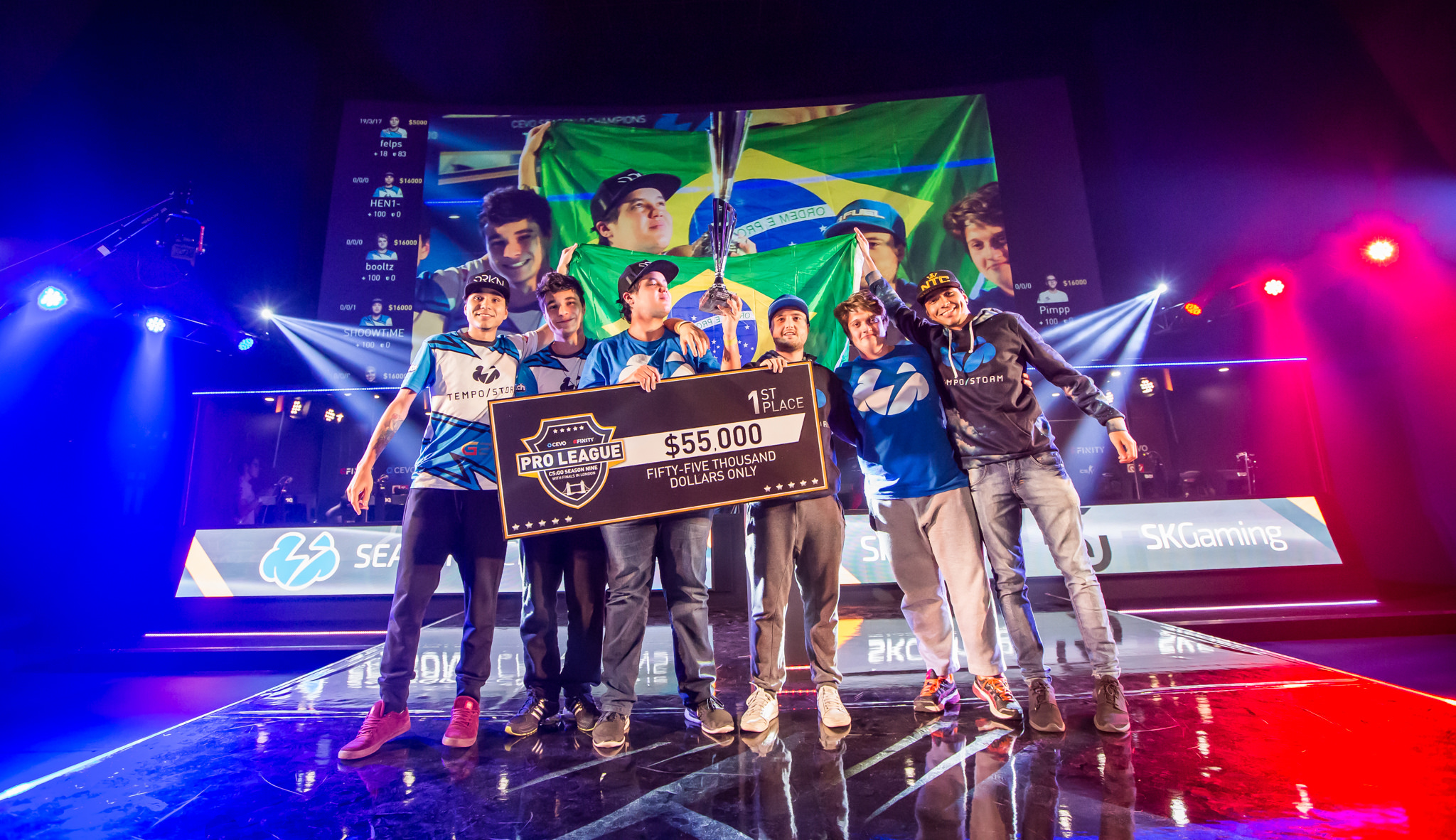 “When we argue for our limitations, we get to keep them.”

Brazilian Counter-Strike has, in respect to number of internationally relevant teams, surpassed North American Counter-Strike. That is hardly an insignificant statement, with North America having firmly been the second best region, after Europe, for the entirety of CS:GO’s history, yet it has become the case in less than a year and a half of work on the side of the South Americans. That success from the South calls into question all of the excuses North Americans peppered Europeans with for so many years to justify their lack of comparable success to their opponents from across the Atlantic.

Were it just the case that Luminosity were one of the best teams in the world, then I would consider it somewhat stretching the case to postulate the opening scenario of this article. One could cite the reigning major champions as outliers in many respects, from their genius in-game leader FalleN to their super-star coldzera. That they won the major, becoming the only non-European team to even make the final of one, would hardly invalidate the entire North American region and its difficult circumstances.

No, it has been the rise of Tempo Storm, the second best Brazilian team and in many ways the sister team to Luminosity, to a top 10 ranking that has forced a comparison between Brazil and North America’s methods, rather than simply focusing on what advantages North America lacks in comparison to Europe. Tempo Storm won a tier two event in the Gfinity CEVO-P S9 Finals, have a top six finish at a large tier one event (IEM X Katowice) and finished ahead of all the top NA sides at the recent Dreamhack Austin.

It is entirely fair to cite both Brazilian sides as better than all of the North American teams right now. Yet, they both accomplished their rise without any of the advantages NA teams have thrown up to shift the responsibility for the lack of trophies and top finishes for NA’s best over the last four years. Rather, we see a gradual and systematic approach to improvement from both Brazilian teams which shows where North America has failed to apply similar methods.

Excuse #1: “We can’t practice with Europeans on a regular basis”

A reliable and oft used excuse throughout the history of North American Counter-Strike, most prominently from the post-CGS era (2008) onwards, was that NA teams would always be behind on the European meta-game, due to not being able to practice with the top European teams on a near daily basis. Even if NA teams could have bootcamps in Europe, they would never have the same exposure and thus it was suggested that it was unfair to expect similar results over the other side of the Atlantic.

Luminosity did not climb to the position of being a multiple time major play-off appearance team by moving to Europe. In fact, it was North America that FalleN’s men moved to, practicing with the very same North American teams who had wielded the aforementioned excuse. It’s not as if Luminosity simply watched demos and copied the style of the Europeans either, they clearly patterned some of their game on a tactical team like Na`Vi, but adapted it to provide a fresh twist which fit their own personnel and philosophy on the game.

North Americans, on the other hand, continue to play their own meta-game within their muddy little puddle, where they get away without being punished for sloppy play and imagine that they will simply “play more seriously” once they face the top European sides. As Luminosity have shown us, you play in big games the way you practice on a daily basis.

In 2015, no North American team managed to progress from the group stage at any of the three majors. At the very same majors, Luminosity, under various names, reached the quarter-finals each and every time. Does travel on aeroplanes affect the physiology of Brazilians differently than North Americans? One cannot imagine so and no evidence has been presented to suggest as much, yet their success has been consistently and noticeably better than their Northern bretheren’s.

Luminosity have finished in the top four of five tournaments in Europe over the last six months.  As difficult and straining as travel can be, they have found success nonetheless.

Excuse #3: “We don’t have salaries as good as the top Europeans”

North American teams prior to 2014 always brought up the mighty dollar as the defining characteristic of the best teams. Since, they argued, they did not receive salaries, they could not justify practicing as much or as diligently, instead considering their CS:GO careers as part-time jobs or hobbies.

Certainly, one can imagine the distractions a lack of regular income could have upon a would-be top player, but by Luminosity had begun their rise in 2015, North American teams were already numerous in terms of those earning good salaries and some were above the level of European teams out-performing them at big international events. When Luminosity, as KaBuM and Keyd Stars, began delivering big upsets against elite European sides and making it further in the majors than the North Americans, all on next-to-no salary, the question of hunger seemed to be framed a little differently than it had been in the past.

Cloud9, CLG and Team Liquid all made legitimately good salaries, which continued to increase over the year, and yet none could make the play-offs of a major that year. Apparently an abundance of spending money didn’t help NA players aim more accurately and a lack of money didn’t stop fer ripping off heads with his AK.

Excuse #4: “We don’t have a pool of experienced players”

Part of the reason the same names featured in teams like Cloud9 and iBUYPOWER is that the sentiment among the top NA pros was that a lack of experience in the rest of the talent pool made them essentially worthless or requiring of too much time simply to get up to speed.

KaBuM took a bunch of rookies in and became a team placing top eight at majors. fer went from being a player who had played his first ever international tournament at ESWC, in November of 2014, to one of the world’s best individual players by the middle of 2015, hard carrying his team on numerous occasions.

coldzera came into the team half way through the Summer of 2015, but fast became both the star of his team and a surprisingly consistent and successful individual player on an international level. The latter has since gone on to become one of the true super-stars of CS:GO, the MVP of the team’s major championship in March and cited by some as the best player in the world.

Tempo Storm shows this process of creating top players out of a mixture of investment, dedication and opportunity, as they have seen two key names develop in a short space of time. HEN1 was a member of that KaBuM line-up prior to 2015, but was left out of the team which began to turn heads at MLG. When his Games Academy team was attending events in the latter part of 2015, people began to see he was an explosive player. As much development as he will still have to make to become a super-star, he was a solid carry for his team prior to the assembling of this newest roster.

Tempo have pulled off their own coldzera-esque pick-up, at least to outsiders, with the recruitment of felps. Highly touted within the Brazilian scene, those of us outside of South America knew essentially nothing about him. A good performance in Katowice showed he was more than just making up numbers and a monster fragging run at Gfinity CEVO-P S9 Finals has shown he is seemingly the next in line after coldzera, fer and FalleN who can become a world-wide force in CS:GO.

Excuse #5: “We don’t have a pool of strong players to build teams around”

As well as lacking experience, it was also felt that North America lacked star level talent. It was too easy for the top players to establish their hegemony by citing the lack of LAN experience for would-be new stars in the scene or laugh at their faltering fledging first attempts to develop outside of online play. In contrast, the Brazilian teams have repeatedly developed talent and made the hard choices to remove stable names to give potential a chance to manifest.

Keyd Stars were already a solid side, with big single map upset wins and good major runs, when they made the choice to remove zqK-. That move made room for coldzera, who went to become the team’s star, and also forced FalleN to take up the AWP again, which has seen him transform from merely a great in-game leader to a legitimately elite level individual player himself.

Luminosity removed boltz to allow them to bring in fnx and TACO. Both additions have seen the team improve massively, going from also-rans to multiple time event finalists and eventually major champions. On the part of boltz, it has even seen a new level of development from him, with him emerging as a Brazilian KRiMZ, stable and consistent in his performances, now anchoring Tempo Storm’s more erratic fraggers (felps and HEN1).

Excuse #6: “We lack strong in-game leaders to bring out talent together”

sgares was not hailed as a CS:GO mastermind prior to Cloud9’s run of three straight finals in the Summer of 2015. Prior to that, he was seen as a good IGL who couldn’t control his teams most of the time. In fact, he had even given up the reigns of leadership in late 2014, allowing SEMPHIS a crack at it. The name many looked to as the great IGL of NA was DaZeD, who was unable to survive beyond the end of 2014 due to iBUYPOWER’s match-fixing scandal seeing him banned indefinitely from competitive play.

Despite salaries increasing in size and number, more and more teams getting the backing to become full-time professional players, NA still lacked for top quality IGL material, or so we were told. How is it then that Brazil has seemingly discovered two names in the span of less than a year and a half?

FalleN was not a leader in 1.6, but rather a star AWPer in the vein of a GuardiaN. In CS:GO, he has dedicated himself to the extent that he is now considered the best IGL in the world and was not again recognised for his individual talent until the latter half of 2015.

Tempo Storm used then coach peacemaker, now with Team Liquid, as their IGL and found limited success, very nearly managing a top four finish at IEM X Katowice, but failing to qualify for the major or the play-offs of Dreamhack Malmo. At Gfinity, boltz stepped forward to take on the role of IGL and not only delivered an MVP level performance individually, but saw his team to lifting their first international trophy. At Dreamhack Austin, he again steered his team to the final, losing out only to Luminosity and the world’s best at his role.

IGLs are made, not born, just as star players and role players also do not fall out of the womb fully equipped to perform their roles. What can we assign the development of the Brazilians to in this respect?  The dedication to stay the course of learning, a desire to become the best and the hard work necessary to master a craft, albeit moreso in the case of FalleN than boltz, thusfar.

As the saying goes: “excuses are like assholes, everyone’s got one and they all stink”. Certainly, these excuses outlined here are setbacks and hurdles which prevent the same rapid progression one sees from European sides, but as Luminosity and Tempo storm have shown us those obstacles can be overcome, if the right attitude and process are employed. A winner will find a way to succeed, while a loser will find an excuse not to.