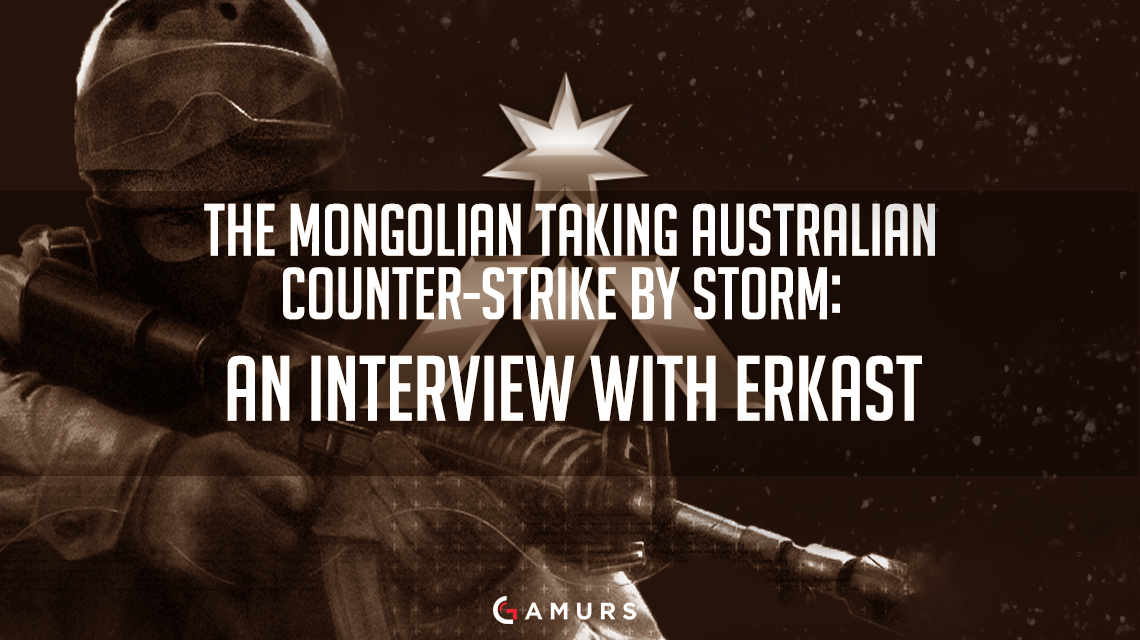 I interviewed Erka “erkaSt” Gantulga at the ZEN League Offline Qualifier in Sydney, where his team put in some expected strong performances on LAN against hopefuls Legacy and former Parallax side – Avant Garde. We talked about his career, team, and some issues concerning Australian CS as a whole.

How did you get started playing CS?

erkaSt: “When I was 12 or 13, I used to play with my cousin, and go over to his place and play casual 1.6 for most of the time. Then, from 2012, I started to play 1.6 competitively back in Mongolia but that was the end of the 1.6 era, so the game was dying. Then CS:GO came out and I bought it in 2013. I started to play [CS:GO] competitively in Mongolia and won every major or minor tournament there and that was how I was recognized in that scene.”

So you mentioned that you are, of course, from Mongolia. What is the domestic scene like, considering that it is hardly known on an international scale?

“It is very much like the Australian scene in some senses, because Australia is a continent you can only really play Australian and New Zealand teams. Mongolia has the same problem because it doesn’t really have good internet connection towards Asia and so all we did in Mongolia was sort of play the same 10 teams and stuff, so its basically the same in that sense.”

Was CS one of the main reasons you moved to Australia or was it more to study here, and following on from that, what was it like moving to Australia?

“Yeah, so I left Mongolia and moved to Australia to study here and [as such,] left my team in Mongolia. [After that,] it was a pretty rough start because no one would believe if I’d say I was from Mongolia, so I’d [always have to say] ‘please pick me up to teams’ (he says with a small smile). It was tough from the start.

Then there was a local LAN in Sydney and I begged some of the local guys like ‘would you please play with me? Just give me a chance.’ Then [after they let me play with them] I got MVP in the group stage and I played really well at this LAN and some of the other guys noticed me and those guys [who were] the Corvidae organization gave me a PC and that’s how I started my career here in Australia.”

I begged some of the local guys like “would you please play with me? Just give me a chance.”

The main way that I found out about you as a player was through your stand-in performances with Athletico, where you played really well. How did that offer come around?

“I played with Corvidae then that team [died], so I moved back to Mongolia just for a holiday for like one month and then [when I came back] the Athletico guys offered me to stand-in for Chuch for like three or four months.”

Did you receive a lot of offers from other teams while you were standing in for Athletico?

“Yeah, when Chuch came back, I received offers from a couple of teams and I was comparing the offers, and the best offer I had was from Immunity because they also had a LAN spot (WCA 2016) in China in December [of 2016]. Right now, we’re (Immunity) getting along really well.”

Following on from that, how would you describe Immunity as a team? How do you fit within the Immunity structure?

“I’m kind of a player that [normally] takes a while to fit within a team. Because, first of all, there’s the language barrier; I’m not a native English speaker. Also, I’m not a talkative guy within the team, so it’s hard for people to want to make me feel comfortable. But, because we had the trip for seven days in China (at WCA), it was a really good benefit for my team and me, because we got along really well. We had dinner and shared meals every single time we ate, and it made it really easy to get along quickly with [the team]. So when we came back from China, my confidence as a player was really high because I knew them all in real-life and had talked to them all before.”

How would you describe yourself as a player?

“I would describe myself as a player like someone who can play every role. Sometimes I like to lurk, sometimes I just go entry-frag or sometimes I just support, it depends on the situation; I’m a flexible player.”

So just beforehand [at the ZEN League Offline Qualifier], you dropped 37 or 38 kills in regular time against Avant Garde. After talking to the players, all they could say is that Immunity is the erkaSt show. How does it feel to you, playing this well on LAN?

“It was 41 kills (he corrects me with a smile). Basically, our confidence was really good because we had a good start on Dust II – the first map. So, pretty much, I was just super confident, wasn’t afraid of peeking people, and I knew what was going on and what [our team] was doing against them. I just played anti-what they wanted to do and it worked out really well. So I fragged a lot.”

Early on in your career, when you moved to Australia and no one knew who you were and then all of a sudden you were destroying the lower levels of Australian CS, you had a couple of cheating accusations yourself. Considering the fairly prevalent topic of cheating in Australian CS, what are your thoughts on it?

“In Australia, the top-tier teams, which I will include like Tainted Minds, Chiefs, Immunity, Avant Garde and those general top-eight teams, I don’t think anyone [of those teams] is cheating. I think it’s tough for people upcoming right now, so I think that maybe [the people outside of the top-eight] might cheat, but the actual top teams aren’t. That’s just my opinion though. It’s always hard to come out of division two, division three, and maybe some people [to get out of those divisions] might cheat.”

Some of the players I’ve been talking to around here have brought up how Australian CS is oversaturated with too many online tournaments and not enough LANs. What do think of the tournament environment in Australia?

“Yeah, the difference between online and LAN is huge, because online, my theory about the Australian scene is that it’s always a competition between the top-10 teams and because they scrim against each other every night, they play a lot of online tournaments against each other; people just don’t play seriously that much. So now, they just decide to not play really safe, they just push through smokes, and don’t player proper CS.”

You’re here looking to qualify for the ZEN League (they did qualify shortly after this interview with a series win over Legacy eSports) and there is a lot of talk about Australian teams going up against Asian teams as they will have four qualifying spots in [the league]. Considering this, what do you think the difference is – if any – between the Australian and Asian scene?

“The thing about Immunity is that our first LAN was at WCA in China, against Asian teams and one Brazilian side. We did really well there, got an overtime against Tyloo, and we beat Cyberzen on one map. So, from my experience, the difference between the Australian and Asian scene isn’t that big. CS is a game where if you’re confident enough, you can beat anyone, and the Asian teams have a bit more confidence against Australian teams. I think that if Australian teams bring a bit more confidence, [they] are more likely to win against Asian teams; that’s what I think.”

Thanks to Erka for the interview. You can follow the Mongolian LAN God on Twitter here, and watch his team – Team Immunity –  play in the upcoming CGPL Season 10 and the ZEN League.

Interview done by Max Melit @ ZEN League Offline Qualifier, who can be found on Twitter @max_melit or be contacted through email: [email protected]

Note: minor edits were made throughout to improve readability.