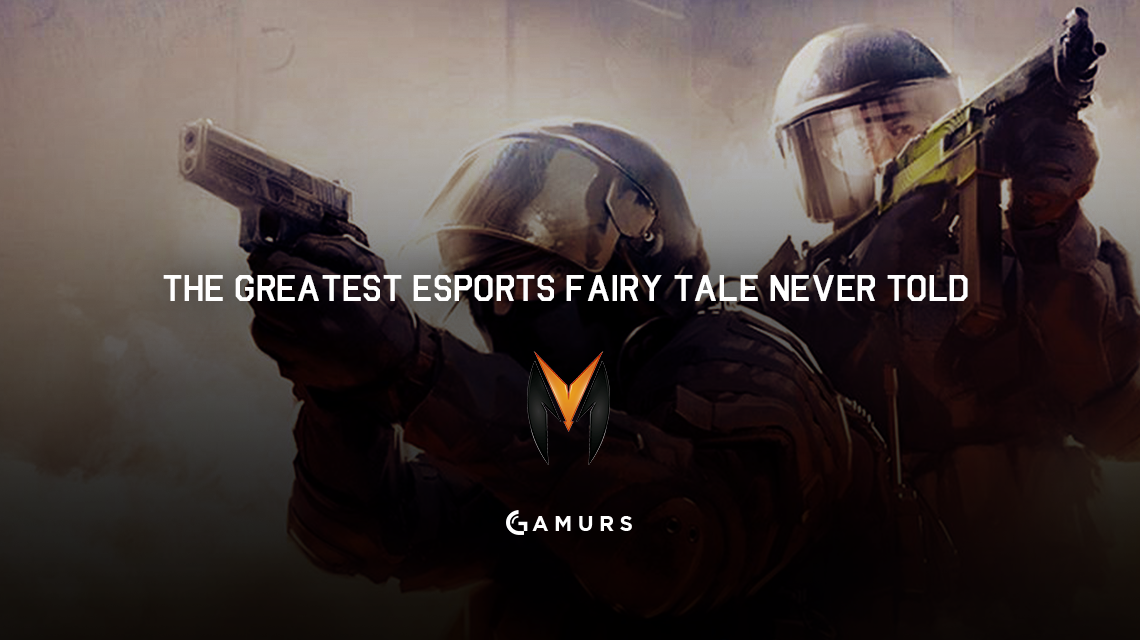 Due to the volatile nature of Counter-Strike: Global Offensive as a game, teams of disproportionate skill can swap wins and losses like high-school students swap saliva – given the right conditions and that the right players are in the right form, though. These conditions are never constant, never replicable, always elusive and always used as a scapegoat for defeat. One team can base their tournament win from the lower bracket, as it allowed them to “warm-up” and “find a groove,” just as much as a team can base their tournament loss from the lower bracket, as too many games can lead to too much fatigue and stress.

Furthermore, “form” can seem even more unreachable and subversive as an actionable idea, and can make a player look on top of the world one day and at the bottom of the barrel the next. However, because these extraneous and metaphysical forces have seemingly no rhyme or reason, and losing teams over-emphasise the significance of these forces versus their actual play in-game, doesn’t mean they don’t matter. Sometimes, when the hotel beds are just right, all the teams from a randomly drawn group matches their map pool perfectly and every single flick of the wrist magnetically finds its target, the truly impossible can suddenly become eerily achievable.

In mid-late 2013, the CS:GO landscape was at an interesting place. Ninjas in Pyjamas was failing to suppress a coup d’etat from VeryGames for the number one spot. Astana Dragons announced their roster, which changed the makeup of the CIS region by gutting two top-10 teams in favour of a singular potential world-beating side. DreamHack Winter 2013, CS:GO’s first major, was announced. The second best French team at the time, LDLC, disbanded their roster (Happy, apEX, Maniac, Sf, KennyS), which would be crucial in setting up some roster moves in the French shuffle of 2014. And within these goliath teams and superstar names posturing to play in even bigger tournaments, popular player apEX moved to the relatively unknown French side Clan-Mystik.

Many saw this as a dead-end in Dan “apEX” Madesclaire’s career, and based off of the team’s biggest claim to fame being a second place finish at the $5,000 DreamHack Valencia, that didn’t seem to be far from the truth. However, no good bedtime fairy tale starts without a splintered group of washed-up and inexperienced protagonists serially failing their way upwards to success. I mean, The Dirty Dozen doesn’t have the same effect if all the characters are hardened soldiers. What makes that film great is that all the characters are flawed in some way and that they come together to create a system that operates greater than the sum of its parts.

So, in the spirit of this infamous TV trope, and with the historical context in mind, I present, “The Greatest Esports Fairy Tale Never Told.”

ESWC is one of the most enduring tournaments in the esports landscape, dating back to the burgeoning stages of esports as a whole in 2003. ESWC 2013 would mark the 10th anniversary of the tournament, and given that DreamHack Winter 2013 was lurking on the horizon of the tournament schedule, any positive results at this tournament would give an even greater positive return for team’s boot camps and confidence levels heading into one of the biggest tournaments in the history of Counter-Strike.

As per every ESWC, all the corners of the globe had their mightiest teams to represent them; from the indomitable pool of Swedish talent in NiP, Fnatic, and LGB, to the volatile North Americans in compLexity. The main storyline headed into ESWC would be watching Astana Dragons, NiP and VeryGames wrangling for control over momentum and results headed into DreamHack Winter and to see who would don the title of “favourite” to take CS:GO’s first major.

While some people thought the CIS Dragons would awake from their slumber and take ESWC by storm, others predicted an epic Swedish versus French showdown in the finals. Yet, there was no talk about the second-seed French side, Clan-Mystik, with their relatively new roster of Fabien “kioShiMa” Fiey, Hovik “KQLY” Tovmassian, apEX, Jérémy “ioRek” Vuillermet and Michael “HaRts” Zanatta. The team only qualified for ESWC due to the tournament being held in Paris and there were two French invited teams, so the expectations on the side were almost non-existent. However, perfect storms of luck, form and team play can happen to anyone, anywhere and Clan-Mystik was no exception to this rule.

Clan-Mystik’s first major stroke of luck lied in the seeding and placement of their group. Out of the potential top seeds of NiP, Astana Dragons, VeryGames, and compLexity, they had the welcome inclusion of the North Americans, compLexity, into their group. Although they had the hardest third seed in LGB also in their group, they at least now had a real chance to make it out of the group stage with none of the “big three” standing in their way.

Their three group stage games brought three different opportunities to showcase their standing in a LAN environment. Their first game against the dangerously skilled online, third best Swedish team LGB, highlighted not only a remarkable resurgence in apEX’s infamously streaky and cerebral entry style, but also a surprise performance from the relatively unknown, but now infamous onliner KQLY.

Although their win against LGB raised the eyebrows of few, the real test and most important match would lie with their game against compLexity. Being the only North American team to ever take a map off of NiP in an offline setting, the compLexity side was by no means a group of slouches, and Clan-Mystik were the underdogs heading into the game.

The game’s setting was Nuke and it became apparent as the round numbers ticked up that although there were 10 players in the game, the real battle was between Kioshima and NA prodigy swag to push their teams over the line. Following a powerfully staged comeback on the T-side of Nuke from the Frenchmen, and after the dust had settled, the score was 15-15, with Clan-Mystik exiting the group in first place due to compLexity’s win over LGB being 16-14, while Clan-Mystik’s win was 16-12.

This seemingly unimportant two round difference would be crucial in letting Clan-Mystk again, avoid clashing against NiP in the round-of-eight. To add on top of this stroke of luck, the seemingly blessed Frenchmen also drew the easiest round-of-eight opponent in the slumping, third seed British side, fm!Esports. Although again on Nuke, the Brits put up a fight, they were no match for a warmed-up and on-fire apEX, who went into the semifinals with a 1.35+ rating under his belt. Despite already defying all expectations by making it into the top-four, it appeared that their so-far fairy tale run would come to a grinding halt, with the might of Eastern Europe talent and hype in Astana Dragons standing in between them and the Grand Finals.

With the first map being Inferno, Clan-Mystik dominated the CT-side, using KQLY as a passive, angle holding AWP turret on B, allowing for the rest of the team to stack A, letting them finish the half at 11-4. Winning the T-side pistol round, and the consecutive rounds after, Astana Dragons made an inspired comeback, led by AdreN, before being stamped out by an in-form ioRek to bring the score to 16-12.

The second map was set on Nuke, and given their problems on it beforehand against a significantly weaker team, the series always felt like it was headed towards a third map. However, in saying this, KQLY stepped up like never before, dropping 36 kills with a 1.85 rating to drag his team kicking and screaming towards a closely fought loss at 16-14.

So considering how close their Nuke game was, despite their lack of experience on the map, the chink in the Ukrainian black knights armour was apparent, and the plucky Frenchmen were now the favourites to close out the best-of-three series. Although relatively absent as a core fragger in their first two games, Kioshima became transcendent on their T-side, opening and closing out sites like it was a public server and aggressively entry fragging his team into a 16-7 victory and taking a spot in the Grand Finals.So with a mixture of blind luck and once in a lifetime form from nearly every member of the side, the unassuming Clan-Mystik lineup found themselves face-to-face with the best team in the world, their biggest rivals, the ultimate raid boss, and their domestic counterparts: VeryGames.

The first map of the Grand Finals was a favourite of the entire French scene at the time, and a perfect battleground to start the countrymen versus countrymen war: Inferno. VeryGames had a 100 percent win rate on LAN on Inferno, in part due to in-game leader and master tactician Kevin “Ex6TenZ” Droolans’s T-side executes, and in part due to superstar player Richard “shox” Papillon being the most unpredictable and explosive mid-round player in the world, able to take over entire halves of CT Inferno by himself.

However, Clan-Mystik, knowing that Ex6tenz would try to anti-strat them by watching their Inferno demo’s, changed their CT-side to be much more dynamic and less reliant on KQLY holding B on his own. Rather, KQLY would constantly be changing positions around the map, and on top of that, also changing his normal passive playstyle into one focused on holding down areas of the map by aggressively holding angles.

This change of style from Clan-Mystik, combined with a top-tier CT-side combo by ioRek and Harts on the B site, and a deadly T-side entry partnership in kioshima and apEX, led to Clan-Mystik being the first team to ever beat VeryGames on Inferno, on LAN, and in convincing fashion with a 16-11 scoreline.

Mirage bore a slightly different story from the get-go, with Clan-Mystik having never logged an official game on the map; Ex6tenz had a field day on CT side. With intricate set-ups and transient mid-round calls, VeryGames seemed to shake off their first map loss and finish with a very strong 12-3 CT half. In a manner that epitomised Clan-Mystik’s tournament run up until that moment, spearheaded by Kioshima, the unlikely group of second-tier, washed-up, French talent came back with 13 unanswered rounds of their own to win the game, series, and tournament 16-12 in what is one of, if not the greatest, underdog wins of an international LAN in the history of CS:GO.

Although that specific Clan-Mystik roster would never again reach the dizzying high they achieved at ESWC 2013, and the lineup would itself splinter with KQLY and apEX joining LDLC, their win in Paris, against the best team in the world and their fellow countrymen, is a poetic story within itself. Their tournament run at ESWC remains one of the flukiest ever and is an important event in the timeline of CS:GO history.

Do you remember watching this fairy tale run by Clan-Mystik in 2013? Let us know by commenting below or tweeting us @GAMURScom.

Statistics for the Grand Final matchup: