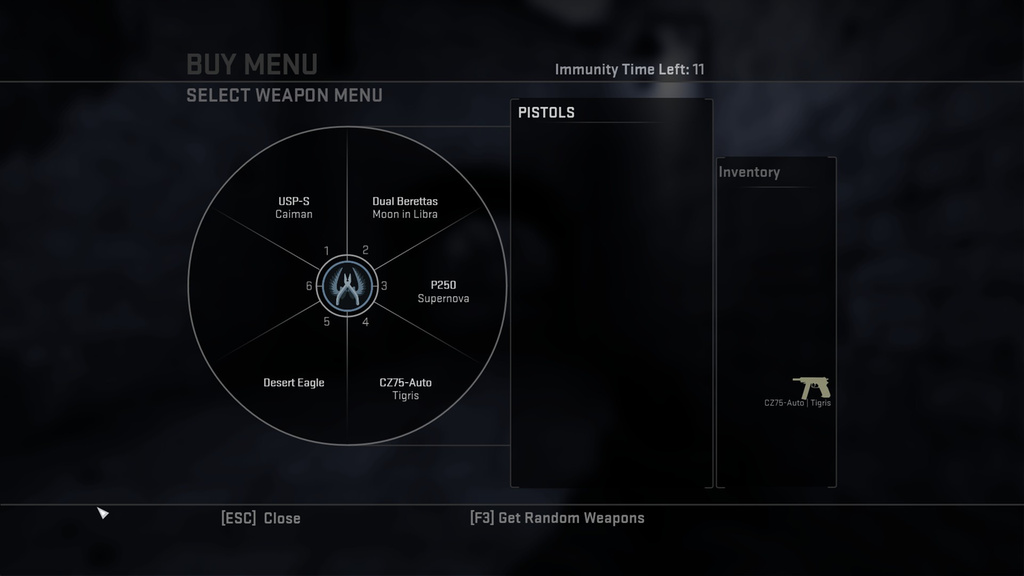 There has been talk for quite a while about altering the current weapon loadout of CS:GO. If you are an active person on the Reddit CS:GO subreddit, you might remember posts about how OP, or for that matter how under-powered some weapons are. Everyone, of course, knows that there are a wide range of opinions about the CZ. After seeing the CZ go to the T’s, I started becoming a more active thinker about changing the weapon loadout. To give a taste of what people are saying, some people think that the Tec-9 should go over to the CT’s as well. Some people say that the AUG is a shit weapon and should be replaceable. Some people talk about adding a special slot for the CZ. Some people bring up the idea that Terrorists and Counter-Terrorists should be able to choose their loadout from the entire pool of guns. As a person who thinks about game balance more often and more rationally it seems than most other gamers, I decided to write this article to examine the state of this situation for myself and hopefully contribute to a larger discussion on improving our game, Counter Strike.

Instead of going through the whole discussion of game balance, let’s break it down focus will be on effects of allowing one side to choose weapons that are historically on the opposing side. I plainly state that such a change would totally change the game. For example, all Terrorists would be able to have complete access to the M4A1-S. This means that they can attack a site, and the CTs would have great difficulty knowing where they are. The CT’s access to silenced M4s is not a problem because they are in the defensive position, and the T is better able to find the CT in that set position. Imagine how OP it would be to have an execute strat where the Ts smoke up a whole site and then move in with fully automatic, silenced, assault rifles. For this reason, I am opposed to such a loadout change; it is simply too powerful. Nerfing the M4A1-S would ruin the fun of using that gun. It would mean no strats like the described one but at the cost of ruining what we have already. This is all just to give each side the option of the other’s guns. Not only would the standard CT weapon be too powerful, but the standard for the Ts would also be overpowered. Counter-Terrorists would be at those well defended positions with guns that are a one shot kill to the head with head armor, and all of those Ts rushing in could just be taken down with one-taps to the head. This is much different from the Deagle, which is a one shot to the head kill and is available to both sides, because the AK has 30 bullets per clip, is full auto, and is much more controllable. With this weapon, two bullets can easily be transferred across the map at the direction of the enemies head by any noob. With the M4, that is not possible. The SCAR already exists for CTs, is a one shot kill to the head, and is full auto, but this weapon has a lower fire rate, more difficult recoil pattern, and it is available for both sides currently. The auto sniper may be OP, but there are better ways to manage it on top of its cost as the ability nowadays for a team on an eco to take the full buy team down has become much more prevalent. Such a huge change in loadout selection would make the game more imbalanced than it already is and take away from the distinctiveness of different sides in the game.

In terms of other weapons being swapped around, my view is different. Their should be a slot for the CZ-75. As a redditor pointed out today, it is so risky to use that it should have its own slot so that the player can choose exactly what situation they should buy it for. The player is not going to know how the opposing team will be playing that game before it even starts, so they should be able to choose in-game if it is the right time to buy a CZ or a Five-Seven. The CZ was definitely too OP in the past, and buffs would bring it back to that form, but if the current way is kept, it is too weak in many situations for the user. Also, Valve has shown that they will not be removing the gun from the game, so the only fair thing to do is to make an extra slot for it. On the Tec-9 for CTs, I don’t see much wrong with it. The stats are a bit better all around for the Tec-9 versus the Five-Seven, the CT equivalent. This discrepancy seems indicative of a need to change the Five Seven to give it a unique advantage over the Tec-9 and other pistols. At the moment, the Five Seven is just the red-headed stepchild of the pistols. A game should have unique characteristics for guns, not one gun being better than another in every aspect.

These discussions about game balance have brought out the best in Counter Strike. The plebs asking for full-auto deagles, with no recoil, and a 30 round clip have been fazed out. If anything, these discussion prove that the Counter Strike community is healthier than those who see the game devs as gods even though they nerfed the perfectly balanced game aspect that everyone liked. Good job to you who try to make the game better for all of us, but you can’t rest yet because we still haven’t worked out everything with the loadout dilemma.