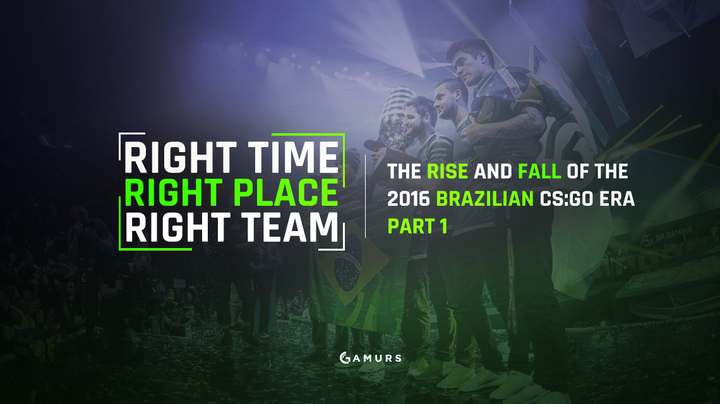 SK Gaming, in their current state, is dangerous. The dormant potential for a volatile explosion of success is as prevalent within their roster as it is out of reach. Although their pedigree might precede them in some sense, don’t mistake this aura of danger as hard evidence for the continuation of their once glorious dynasty. Their time within the CS:GO narrative – for now at least – as the team who holds primacy in power has passed. The CS:GO crown, throne and title of “Kings” has found a new suitor, and whilst they still make up one part of the coup d’etat that looks to displace this paradigm, they themselves are no longer the ones on top. The champion has become the contender. The hunted, the hunter. The immortals, mortal.

These labels have only come into existence in recent memory, and in some ways they diminish the significance of SK/Luminosity’s story. When you put the length of their reign as CS:GO’s premier side against other reigns throughout history, the sheer number of days as number one might not seem as impressive. However, when you look at the actual story behind the numbers, you see something much more beautiful and akin to a Hollywood movie script, rather than five guys who play video games really well.

Since the line-up burst onto the scene and their zero-to-hero story of qualifying to both MLG Aspen and ESL One Katowice 2015 and then finishing top eight at the Major, they had the same core four of Fernando “fer” Alvarenga , Gabriel “FalleN” Toledo, Ricardo “boltz” Prass, and Lucas “steel” Lopes – with Marcelo “coldzera” David coming into the line-up to replace Caio “zqkS” Fonseca before ESL One: Cologne 2015. This roster was the one that won the heart of fans and analysts alike, and took the North American online scene by storm. Whilst it was clear that they would never be world beaters, there was a clearly defined system when watching them play, and FalleN had a rare ability as a leader to make his team play significantly greater than just the sum of their parts. For the vast majority of their existence in the early days, the main lightning rod for praise in firepower was fer, then later joined by FalleN and coldzera. Most people forget that FalleN’s role with the AWP was more akin to something like Finn “karrigan” Andersen’s role on Dust II when he was with Astralis, rather than a top three sniper in the world. They didn’t necessarily have the shiniest parts, but the parts they had were relatively reliable and actually working.

From the outside looking in, it was amazing what FalleN had achieved with his side. Creating an intelligent system that could consistently place them heads and shoulders over their North American counterparts at Majors, and most importantly he built a whole esports infrastructure around the Brazilian scene – which before him was non-existent. This infrastructure that FalleN helped create, is an extension of a never-ending hunger to do better. Their team was good, but the mechanical parts of a team’s machine eventually rusted given enough time, and looking around for adequate replacements in his region was like looking for water outside of the desert oasis. So, this drought of developing talent that had financial support around it was quickly fixed by creating a sister team to mould and facilitate the growth of young stars through working with sponsors to flush money throughout the scene. This team that FalleN helped create was known as Games Academy, and went on later to become Tempo Storm and now Immortals.

Their team was good, but the mechanical parts of a team’s machine eventually rust given enough time, and looking around for adequate replacements in his region was like looking for water outside of the desert oasis.

This sister team would prove to be the ace up the proverbial sleeve for taking Brazilian Counter-Strike to the next level. No one had heard of Games Academy or the players associated with the side. I mean, surely no world-beaters would come from the  “second-best Brazilian side.” Well FalleN and the elements in his team didn’t need world-beating talent, they just need the right talent. Although their three back-to-back playoff finishes at Majors was a feat within itself,  just as FalleN wasn’t satisfied with the state of Brazilian CS, he wasn’t satisfied with the playoff consistency of his side. He wanted bigger and better things, and this hunger could only manifest through a change of the four man core that had taken the mantle of Brazil so far.

So in what was one of the most sudden roster swaps in recent memory, the then Luminosity switched out boltz and steel in favour of Epitacio “TACO” de Melo and Lincoln “fnx” Lau, just days before the FACEIT Stage 3 Finals. Whilst 1.6 fans ears perked at the roster move with flashbacks of fnx’s dominating run with legendary phenom cogu back in the Brazilian team mibr, uncertainty was the primary driver of emotions rather than optimism.  But, just because the wider community’s sword of expectations were tempered in a bath of unknowns, FalleN and his team knew after watching and growing alongside fnx and TACO how they played, and most importantly knew that they would fit with the system they had created.

Immediately, the blade of condescending tones, forged in a crucible of omnipotent fans yelling “Told you so!” looked to behead the Brazilian’s decision to make such a foolhardy move just days before an international LAN.

The “growing pain” period for this roster was as short as it was excruciating, with their first official game as a team being a soul-crushing 16:0 to a new-look Fnatic. Immediately, the blade of condescending tones, forged in a crucible of omnipotent fans yelling “Told you so!” looked to behead the Brazilian’s decision to make such a foolhardy move just days before an international LAN. However, just as this ugly sword of fake unrighteousness pressed against the neck of the Luminosity side, they came back the following day with a Bo3 win over Team EnVyUs – the recently crowned Major champions. Although the neck of the Brazilians felt an immediate decrease in pressure from the community, flukes can happen to even the worst of teams – “bet you can’t do it again” screamed both the odds of betting sites, and their would-be executioner.

Another Bo3 win on LAN, this time over the Ninjas in Pyjamas, who had just experienced an ephemeral burst of old form at DreamHack: Cluj-Napoca with their victory over tournament favourites – Team SoloMid. From the worst possible performance a team could have, to the playoffs – Luminosity now demanded both attention and respect. TSM couldn’t even stand in the way of the Brazilians, with a painstakingly close 2:1 loss to them, and the final map going into overtime. The communities sword was now sheathed as the memory of their 16:0 loss only served as fuel and gloss to their fairytale run to the Grand Finals. The “click” of positions was immediate when watching their wins. TACO filled the void of a lack of aggressiveness, with his confident entry style that allowed fer and coldzera to focus more on their own game rather than trying to fill positions they don’t want. Fnx was doing boltz’s job of passive clutching and coming into sites late, only with the experience and pedigree of a man playing Counter-Strike actively since 2004. Their run was punctuated with defeat at the hands of Fnatic (who would go on to win the next 5 international LAN’s), but it was clear from their performance that skill ceiling of this roster was above the playoffs of a Major.

Although the Luminosity roster would finish off 2016 in a disappointing fashion with a failure to make the playoffs at the ESL ESEA Season 2 Finals – with consecutive Bo3 losses to Natus Vincere – this was in some ways the more expected level of a roster who had only been together for a matter of moments. In coincidental fashion this Na`Vi match-up would go on to become one of the greatest rivalries in the history of CS:GO, as Luminosity grew to have a similar style and almost mirror each other in terms of personnel talent.

So with the benefit of perfect 20/20 historical hindsight, it is clear that the staging point for the Brazilian takeover was set. They had incidentally shown what the monsters they could, and would become with their FACEIT Stage 3 performance, and then the road to get there with their losses at the ESL ESEA Season 2 Finals. With Coldzera being unanimously awarded rookie of the year with his star power becoming central to Luminsoity’s strategy, and Fallen showing signs of AWPing prowess – 2016 was going to be a big year for this Luminosity roster.

What are your thoughts on SK/Luminosity’s run? Let us know in the comments below or by tweeting us @GAMURScom.

I write things in multiple parts because of a deep-seated emotional instability caused by watching both Kill Bills from a young age. Help me recover psychologically on twitter @max_melit.