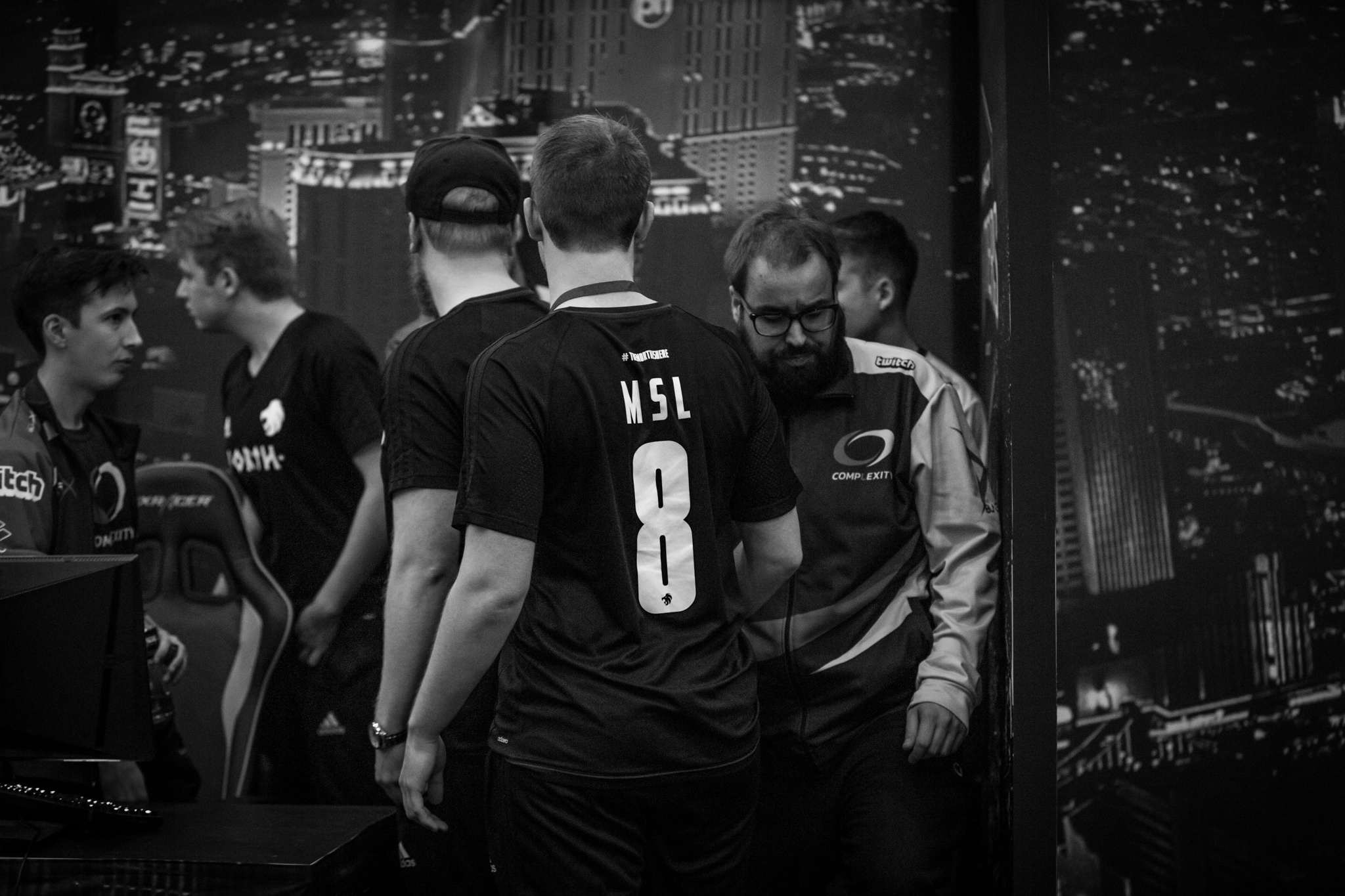 The North American scene had been so frequently underwhelming in the past that the term “NA” itself has actually become a descriptor synonymous with “ineptitude” and “failure.” That reputation seemed to be slowly slipping away due to the brief breakout successes of Team Liquid, Cloud9, and OpTic Gaming at various points last year; however, right about now, I expect that many fans of North American Counter-Strike are violently starting to shake their heads again.

No North American team earned Legendary status at the first Valve Major of 2017, OpTic’s sudden surge irreparably ended as their highly touted in-game leader, Peter “stanislaw” Jarguz, left the team, and most recently, all four North American squads who entered into DreamHack Las Vegas were eliminated in the group stage. Suddenly, when considering the scene and its participants, it’s not at all clear that the dogged-days of “NA CS” are invariably at an end.

After the August player break, Cloud9’s string of high placings may have even exceeded their venerated 2015 “summer run” as the best multi-tournament run in the history of North American CS:GO. They placed second at Northern Arena Toronto and DreamHack Bucharest, finished top-four at StarLadder i-League StarSeries Season 2, and actually won the ESL Pro League Season 4 Finals. However, since then, Cloud9 has fallen into concrete mediocrity. Just before their EPL win, they failed to make it through their ELEAGUE Season 2 group and were likewise eliminated in the group stage of four proceeding premier-level tournaments: IEM Oakland, DreamHack Winter, the Esports Championship Series Season 2 Finals, and the ELEAGUE Major Main Qualifier.

While the Stewie2k-Autimatic combination has certainly worked wonders since the August player break, lukewarm performances by the team’s previous stars in Tyler “Skadoodle” Latham and Mike “shroud” Grzesiek have frequently been noticed and heavily been criticized. Also, while Jake “Stewie2k” Yip has continued to perform at a decently high level as an individual player, despite taking over in-game leading responsibilities for the team, his leadership has been frequently cited as an issue inherent to the squad’s more recent failings. Regardless, in the turbulent pre and post major shuffle seasons, Cloud9 made no direct changes, adding neither players who are more suited to Stewie2k’s style of play nor a veteran in-game leader who could take the team into a new direction. While Skadoodle specifically has looked better lately, the solitary addition of Soham “valens” Choudhury as a coach hardly measures up to the moves clamored for by analysts and fans alike.

OpTic is another vibrant success story gone awry. For a moment in mid-December, OpTic had a wholly unexpected spike in performance as they miraculously won the highly prestigious and highly-competitive ELEAGUE Season 2 and placed second at the less competitive but still fairly stacked ECS Season 2 Finals. Suddenly, after two successive weekends of play, OpTic reasonably looked like a top-three team in the world and an outside contender for the next major championship.

Instead of a more typical peak in the immediate aftermath of a roster move, OpTic only improved modestly over time following the pickup Tarik “tarik” Celik in September. They had unimpressive initial forays at ESL One New York Season 1 and the ESL Pro Season 4 Finals, before showing some promise, but not extreme prowess at Northern Arena Montreal and their initial ELEAGUE group. Their sudden surge seems largely due to a combination of peaking individual play, especially from Rush, at those two specific events alongside equally significant developments on the team’s T-sides via Stanislaw’s newfound leadership. Nevertheless, that increasingly upward trend wasn’t backed by their more recent appearance at the ELEAGUE Major where they failed to make it beyond the swiss style preliminary stage thanks to tough initial draws, lacking pre-event preparation, and poor individual performances.

Unfortunately, their fall only accelerated from there. Just days after the conclusion of the major, it was announced that Stanislaw would be leaving OpTic for Team Liquid, for reasons largely unknown. Once again, in the tragic tradition of North American Counter-Strike, the lifespan of a strong or suddenly surging team was crippled by a baffling roster move or unforeseen circumstance. Without the increasingly competent leadership of Stanislaw, OpTic again failed to make it into the playoffs of DreamHack Masters Las Vegas.

Other once hopefuls in Echo Fox and Team SoloMid dissolved in recent months after long unsuccessful periods of play, with the most promising aspects of both squads being distilled into the new Misfits lineup. That team just attended their first premier-level tournament together in Vegas, but they didn’t make much of an impression. They bombed out of Vegas 0-2 with losses to Virtus.pro and Fnatic. Likewise, no other possible North American upstart, such as compLexity, CLG, Splyce, or Selfless, has shown any iota international aptitude in the past six months. While Team Liquid obviously stands to gain from the Stanislaw transfer, as they have long had sufficient firepower but lacked competent in-game leadership, their rise is not inevitable. We have not yet seen them play on LAN with their new roster, and their last impressive outing dates back to early October.

Even putting the current state of individual squads aside, there are still plenty of reasons to be ambivalent about North American scene generally in 2017. Liquid aside, no blockbuster moves to shore up any of the other wilting participants in the scene were made in this most recent off-season. Personality conflicts and interpersonal drama still seem to be lingering but significant undermining force, as we can infer from Stanislaw’s recent departure from OpTic. And the continued plethora of cash-rich organizations, some backed by lucrative buyouts from mainstream sports franchises, seem to be continuously keeping the more middling talent of the scene artificially disentangled.

But putting those concerns aside for a moment, you have to acknowledge that throughout 2016, North American teams have frequently surpassed expectations and historical precedent. Liquid’s semifinals run at MLG Columbus tied compLexity’s DreamHack Winter 2013 as the best performance for a North American team at a major, and Liquid did it in a far more competitive era. Then at the next major, ESL One Cologne 2016, Liquid surprised again making it all the way to the finals, now clearly exceeding any past major result. Now, that massively overachieving S1mple-infused Liquid would never appear together again, but soon thereafter, Cloud9’s emerging young star in Stewie2k led his team to the first premier-level tournament win by a North American team in a decade thanks in no small part due the addition of his friend Timothy “autimatic” Ta. That team also slumped immediately thereafter, only to be succeeded by the once unimpressive Conquest core in conjunction with Oscar “mixwell” Cañellas and Tarik. OpTic’s unimaginable ELEAGUE victory and subsequent run to their second straight finals was perhaps the most impressive pair of back-to-back tournament showings for a North American team in CS:GO yet.

So what expectations for the region are actually reasonable for the remainder of this year? Will we continue to see these spurts of success moving forward or have those anomalies come to an end?

Unfortunately, it seems many fans perceive the world through the lens of sanguine certainly. Past failures don’t count while future successes are inevitable. “Unlucky draw.” “Bad Luck.” “That one anti-eco.” “That one clutch.” “Just one more roster move.” “Just one more try.” And in the end, what “should have been” always means “what didn’t happen.” It’s exceedingly easy to lambaste this sort of mentality, to pick apart that obvious team or regional bias, but, because this sort of dressing down has long since been popular, I think optimism and excitement has been increasingly and unfortunately been associated with stupidity and fandom, while cynicism has conversely become the principal quality of the supposedly savvy and the would-be cool.

Irony and cynicism are useful tools of deflation. They can very powerfully chastise the ridiculous and pierce through the sort of ignorance inherent to zealous fans. However, to cynically bemoan the present inequities of the North American scene, while not at all acknowledging it’s more promising aspects, I think is tantamount to a sort of cowardice.

It may very well be the case that no one in the North American scene will post results anywhere on the level of 2016’s spattering of short-term spikes in 2017, but there are players, teams, and narratives that certainly look promising as we move back into the tournament-to-tournament grind, whether that be the rise of Cloud9’s young duo, the development of Stanislaw as an in-game leader, or suddenly increased capacity of the newly formed Team Liquid. While it’s surely better to just follow the best teams of the scene without any specific preferences, if we are to earnestly assess the often castigated North American scene and it’s participants in its present form, I think we shouldn’t completely bind ourselves to negativity in an attempt to fend off some terrifically unhip impression of enthusiasm.