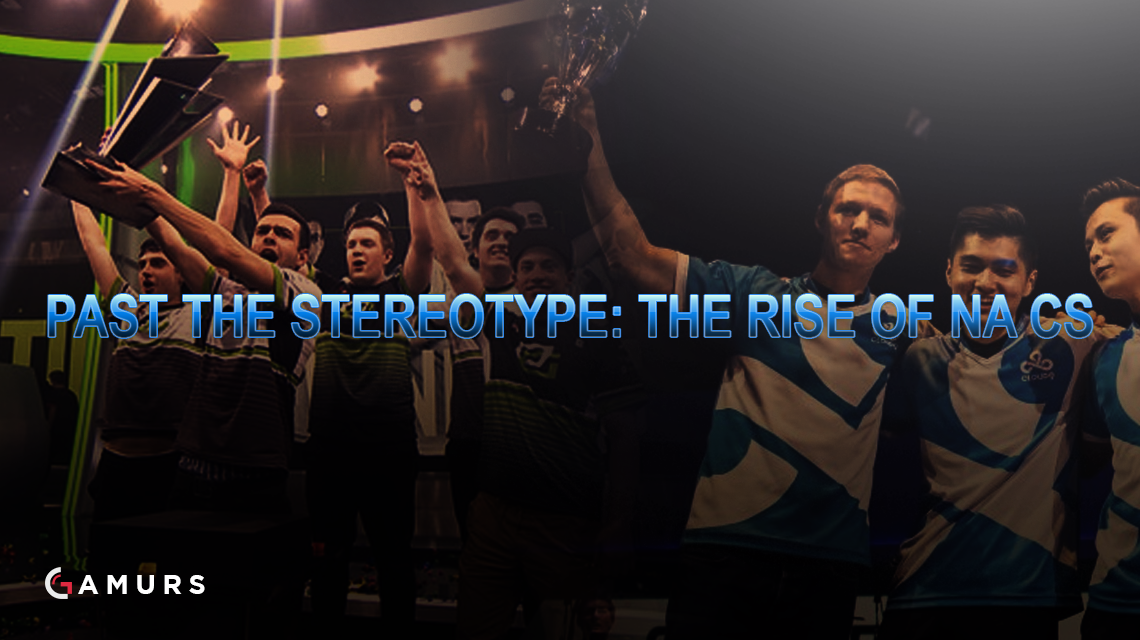 For as long as Counter-Strike: Global Offensive has been a popular competitive game, there has been a looming stereotype that European teams train more often and rigorously than North American ones do, thus resulting in higher leaderboard rankings. However, based on the performances from teams like OpTic Gaming and Cloud9 this season, the stereotype might very well be dead.

As early as last month, the CS:GO team rankings were completely different than they are today. Cloud9 sat awfully lonely in the No. 5 spot, nowhere near any other North American squads. Further down the list we had Team Liquid at No. 10 and OpTic Gaming at No. 12, that was it. Fast forward one month, and OpTic is sitting pretty at No. 3, with Cloud9 further down at No. 9 and Liquid at No. 14, what happened?

It turns out that all OpTic needed was two tournaments in order to go from No. 12 to No. 3. Nobody expected them to win, it’s as simple as that.

For ELEAGUE Season 2, OpTic was put into Group D with Team Dignitas, Fnatic (who were severely weakened after their roster swap) and the French superstars of Team EnVyUs. The chances were high that one of these veteran teams would take out OpTic, who were formed just 10 months earlier. OpTic defied expectations, however, narrowly losing 19-17 on Cache against Fnatic to open up the group stage. From there, OpTic defeated EnVyUs 2-1 in a best-of-three elimination series and got their revenge against Fnatic, beating the squad 2-0 to secured their spot in the tournament playoffs. In the bracket, OpTic defeated both mousesports and FaZe Clan 2-0 en route to a 2-1 win over Astralis in the tournament finals. To make it to OpTic, Astralis and FaZe defeated fan favorites like SK Gaming, Ninjas in Pyjamas and Virtus.pro previously in the tournament, making them more than worthy opponents for OpTic. OpTic may not have taken down the big dogs, but they took down the people who did, and that was enough to get the started.

Apart from ELEAGUE, OpTic placed 2nd at the Esports Championship Series Season 2 Finals earlier this month, quickly boosting themselves up to No. 3 on HLTV’s team rankings. Just last month, OpTic was No. 12, which makes the place they’re in right now seem even more astonishing. OpTic made a very good choice when they acquired Oscar “mixwell” Canellas and Tarik “tarik” Celik, as the duo has been consistently showing good results. I wanted to know what somebody with a long history in esports thought about the current North American Counter-Strike scene, so I posed the question to Ray Arsenault, the COO of the NA esports organization Denial Esports.

“Personally I think that NA CS is doing great, but the best teams in the world are still in EU,” Arsenault said. “Despite that, I believe NA is quickly catching up with OpTic being ahead of the game right now. I just feel that the skill they have on that team is unmatched by anyone.”

North America’s most well-known team, Cloud9 has been on a bit of a downfall lately, but that does not mean they haven’t had some triumphs of their own. In fact, Cloud9 became the first North American to win the ESL Pro League, defeating SK Gaming 2-1 in SK’s own home country of Brazil at the end of October. Perhaps the biggest reason for this win was the team’s decision to sign Jake “Stewie2K” Yip and Timothy “autimatic” Ta. More recently, the NA team has not been doing so well, finishing 7th-8th place at ECS Season 2 Finals and 9th-11th at the ELEAGUE Major Main Qualifier, which dropped them to No. 9 on the most recent HLTV rankings.

The Liquid is Drying

One can’t help but feel bad for Team Liquid. Spencer “Hiko” Martin and his squad always seem to try so hard, but they can never really come out on top. They’ve choked on so many matches that they’ve earned a reputation for it. They were looking pretty good with Oleksandr “s1mple” Kostyliev, making it to the finals of ESL One: Cologne 2016 before losing 0-2 to SK Gaming. Since then, things have gone downhill. Liquid’s showing at the recent IEM Oakland was poor, managing to only win against TyLoo and Natus Vincere. To make matters even worse, the team is currently running without a coach, with Wilton “zews” Prado stepping in as a temporary coach for Northern Arena and IEM Oakland. Maybe TL should follow Cloud9 and OpTic’s technique of a roster swap; it worked for them, so maybe they’ll have the same results should they pick their roster carefully.

What About the Rest?

The NA CS scene does not end here, however. There are still a handful of teams that people seem to forget about. Counter Logic Gaming for example, the home of ex-Liquid player Kenneth “koosta” Suen are somehow doing even worse than Liquid, ending up No. 27 on HLTV’s rankings. Tarik was smart enough to leave the team in August and join OpTic, which is now the No. 3 team in the world. Since the HLTV rankings only go down to No. 30, we have to go to the GosuGamers rankings which go down to No. 361. While they don’t give the same numbers to the same teams that HLTV does, their rankings will do for this purpose. Looking at these rankings, Team SoloMid is No. 35, which could largely be due to abandoning their Danish roster, Rick Fox’s Echo Fox is No. 41, and Splyce and eUnited sit at No. 360 and 361 respectively.

We can excuse eUnited due to only having been formed in August of this year. Splyce, on the other hand, won the ZOTAC 10 Year Anniversary World Cup in October. Since then, the team officially released David “DAVEY” Stafford and Enkhtaivan “Machinegun” Lkhagva and picked up Ronnie “ryx” Bylicki and ayler “Drone” Johnson. Perhaps this new roster will get Splyce out of the hole they’re in, but that remains to be seen.

All in all, North American Counter-Strike is looking a bit better right now than it has in past months. With OpTic gaining strength in every match they play, it seems all we needed was a new team with new talent (and Tarik). Roster changes seem to work out for the most part, especially when you take a took at Cloud9’s Stewie2K and autimatic and, again, OpTic’s Tarik. If other NA orgs follow these examples, maybe we’ll see an NA team hold the No. 1 spot on the world rankings. All we can do is wait, observe, predict, and most of all, #pray4NA.

Do you think North American Counter-Strike is on the rise? Let us know your thoughts in the comments below or tweet us @GAMURScom.