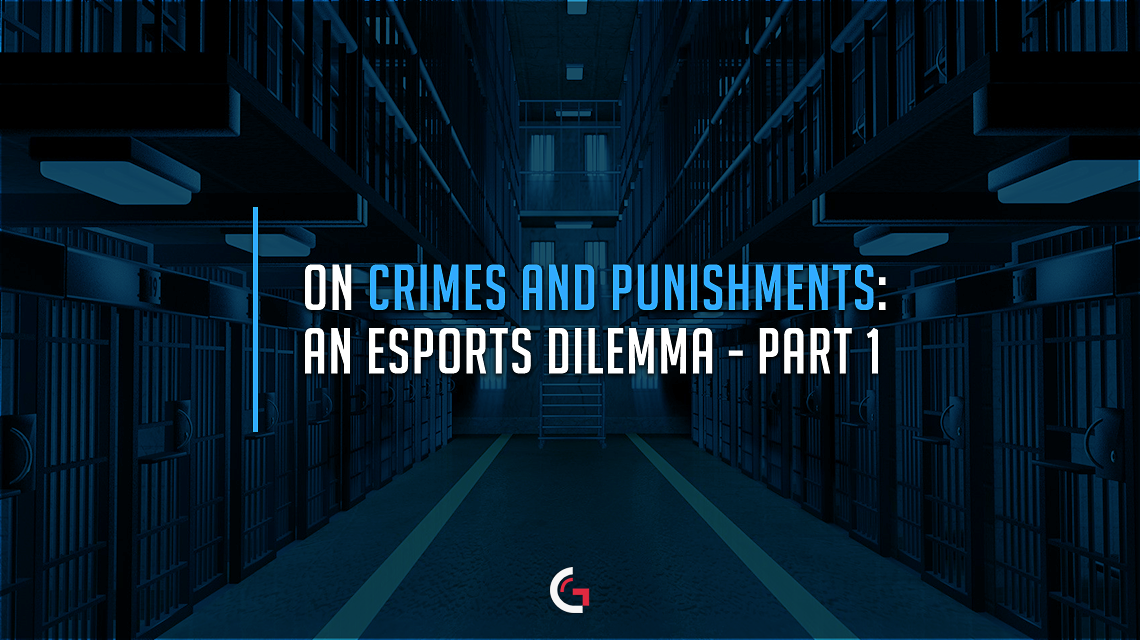 No, this is not an article on Fyodor Dostoevsky’s book, nor is it about Cesare Beccaria’s book. Rather, it draws from the inspiration of Beccaria’s treatise which was written in a time when there was a lack of clear rules and just enforcement of them. In esports, there have been too many instances of ex-post facto rules such as excessive punishment, corruption, cronyism, and arbitrary enforcement of rules, to name a few. Esports is looking like mobster-era New York, and that has to change.

This part of my series will focus on rules of competition and the enforcement of them. Topics such as corruption at a higher level, i.e. the Hilgers-Fnatic situation and ESFORCE, will be included in a later part. All of the articles in this series will deal with flawed rules or enforcement of those rules and will provide a solution to fix the issue.

If there a rule is broken, then due punishment should occur. The team that was negatively affected by the transgression should not be asked whether or not they want it enforced. These failures by admins at events like RGN and Northern Arena serve to ruin the reputation of those who were negatively affected. All the harmed player wants is to have the rules enforced, nothing more, and that shouldn’t be a problem. Under different circumstances, like in a car accident, the person hit by the car may choose whether or not to press charges. The reason why the existence of a choice is acceptable in this case is that no one would judge them for invoking the law and that it is more private, meaning that those angry about enforcement of the law would be minimized. In esports, where players and teams have massive outreach on social media, nothing remains private. Also, there are many fanatical fans, especially those from Brazil, that have been involved in both of the incidents involving rule enforcement this year. Even in mainstream sports, fans would bring hell to players just for enforcing rules, which is why rules are enforced no matter what. You don’t see the referee asking a player who was fouled if they want to take their free-throws or not. With such a large group of people watching sports and the way people get crazy when defending their team, I could imagine murders of players occurring if mainstream sports had referees like Northern Arena admins.

The incident at Northern Arena, for those of you unaware, was Henrique “<a href="https://twitter.com/IMTHEN1" target="blank”>HEN1” Teles not wearing his headset during the first three rounds of the finals against Cloud9. If a player who has competed at the professional level for five years does not put on a headset he is either stupid, soon-to-be diagnosed with Alzheimer’s, or trying to cheat. With the account from <a href="https://twitter.com/Lejukington" target="blank”>Lejuke, the Northern Arena admin who made a video about the situation, it seems most likely HEN1 was cheating and the admin on his side was assisting him. Lejuke recounts that Cloud9’s manager pointed out that HEN1 was not wearing a headset, so he looked over to make sure and called for a pause from the Cloud9 players. Lejuke then asked the other admin about the situation and the other admin claimed that HEN1 was just fixing his peripherals. Upon inspection of the footage, Lejuke found that the admin was not telling the truth. There was then a big debate about the game being restarted. Wilton “<a href="https://twitter.com/wiltonzews" target="blank”>zews” Prado argued that other people were doing it so they should restart the whole tournament and that HEN1 doesn’t speak English, so he could not be cheating by listening to the Cloud9 players speak. After a very public debate, Northern Arena tournament organizers asked the players to move into the green room. Northern Arena tournament organizers mandated only a replay of the third round, against Lejuke’s advice of restarting, because Cloud9 players were disturbed.

The fact of the matter is that it doesn’t matter if HEN1 speaks English or not, which he probably does after living in America for so long. If nothing else, he can get information on what sites are going to be attacked or stacked, how much money Cloud9 has, and what guns they have bought – all of which are pieces of information he should not have.

The issue in this story is not that zews had fought for his team, though he did obfuscate the truth some, nor is it the fault of Jordan “<a href="https://twitter.com/n0thing" target="blank”>n0thing” Gilbert for wanting to enforce the rules. Northern Arena is entirely to blame for the public debate between zews and n0thing, the ridiculous decision to not restart the game and the negative mental effect that this had on C9 caused by the long delay and being down in the game. Plain and simple, Northern Arena should have replayed the first three rounds and replaced the admin on the Immortals’ side.

Ghosting has been a huge problem in esports. Ghosting is when a player looks at the screen where the game is being shown to the spectators and communicates that info to his team. It is a problem if he only looks at the big screen and does not communicate what he sees at the time as it gives him information about their money and positions. There are two major incidents of ghosting in Counter-Strike, both in 1.6, that come to mind. Arseniy “ceh9” Trynozhenko looked at the big screen while playing against AGAiN at MSI BEAT IT 2011 Russia. No action was taken against Na’Vi, which was attributed to them being of the same region as the tournament organizers. The more Na’Vi games there are, the better the tournament is received. Patriotism may also play a factor in such a decision.

The other major instance of ghosting in Counter-Strike was of Daniel “<a href="https://twitter.com/OfficialfRoD" target="blank”>fRoD” Montaner at WEM 2010 against Fnatic. fRoD told Tomi “lurppis” target=”blank”>lurppis” Kovanen when Patrick “<a href="https://twitter.com/f0restCS" target="blank”>f0rest” Lindberg had pulled off the bomb in a clutch situation, which helped Evil Geniuses win the round and match in overtime.

The one memorable incident involving ghosting outside of Counter-Strike was when Jang “<a href="http://lol.esportswikis.com/wiki/Woong" target="blank”>Woong” Gun-woong had looked at the big screen during a game against Team SoloMid at the Season 2 World Championship. Woong then pinged where the TSM players were while they were in the fog of war and was seen looking towards the screen multiple times.

In every one of these cases, nothing was really done to punish the illegal action. Azubu Frost, Woong’s team, was fined $30,000, but that is only a drop in the ocean when comparing the piece of the prize pool they won by advancing further into the tournament. That fine doesn’t even begin to cover what TSM lost out on by losing unfairly to Azubu Frost. They probably wouldn’t have been able to beat Counter Logic Gaming EU, but making it to the semifinals is still a big deal. Furthermore, since there was cheating, we won’t know if Azubu Frost could have beaten TSM fairly, nor would we know whether TSM could beat CLG EU and Taipei Assassins. If Fnatic had won that clutch round, which they probably would have if it weren’t for fRoD’s involvement, then history could be looking much different.

In these cases, it is not only the tournament organizer’s fault for poor positioning of the screen but also the person who ghosted. Players like lurppis are not to blame because they are just playing with the information provided. Players shouldn’t be forced to think about whether or not they would have made that decision without the information they were given. If we expect them to second-guess themselves, then we only further the damage of cheating. For the future, tournament organizers should put players further back from the screen so that there is no opportunity for them to cheat.

Despite the last of the aforementioned occurring four years ago, tournament organizers are still repeating the same mistakes. At ESL-ESEA Pro League Season 1, n0thing pointed out that it was possible to see an opponent’s face, which could allow him to use a special trick to find where the opponents were with the use of a flashbang and observing the opponent’s face for changes in brightness.

Everyone knows that CS:GO is not a perfect game. Pros have recently discovered a way to have perfectly accurate AWP shots while in the air. This obviously shouldn’t exist as being in the air is a poor position and CS:GO is supposed to reward superior positioning. Bugs in maps where players have unfair positioning also have no place in Counter-Strike. During the quarterfinals of a Major, Dreamhack Winter 2014, Fnatic utilized a boost on Overpass versus LDLC. It was a three map nailbiter, and Fnatic clawed their way back into the game with an extremely overpowered boost. Actually, they weren’t the only ones to “exploit” the map. LDLC had utilized a different boost, but it was not nearly as overpowered. Nonetheless, both had broken the rules of the tournament: “‘pixelwalking’ is illegal (Sitting or standing on invisible map edges).” When trying to make a ruling one way or the other, Dreamhack admins could not just rule Fnatic out as cheaters. They then looked to making a ruling against Fnatic on the grounds that Fnatic used a boost where a texture became transparent. The rules state that “boosting with the help of teammates is allowed in general, but it is forbidden in places where the textures, walls, ceilings, floors become transparent or penetrable.” If they were to penalize Fnatic for using a boost where a texture became transparent, then LDLC would have to be penalized too because they used a less overpowered boost that also exploited texture transparency. After much discussion between the admins, they had no choice but to call for a replay the map.

Replaying the map was the right decision, but we never got to see it. Fnatic forfeited the replay. It was a lose-lose situation for everyone involved. Fnatic may not have wanted to look like they relied on “cheats” in order to win games and didn’t take the chance of losing, LDLC did not win the match as legitimately as one would have liked and Dreamhack looked like a fiasco. It was Valve’s fault for not polishing the map, and it was absolutely not Fnatic’s fault for not alerting Valve of this bug, despite knowing about it for months. If you are not charged for an item in your set of groceries, it is not required nor expected for you to come back to pay for the item. It may be a nice thing to do, but when it comes to gritty competition, there is no place for playing nice.

The rules that govern LAN competition need to be better defined, and it is also crucial that people with a strong sense of ethics and know-how be behind the enforcement of these rules. Due to strong community backlash associated with these incidents, tournament organizers are more likely to step up their game in these departments. Unfortunately, corruption at the highest levels in esports goes unnoticed and is a much more difficult problem to cure. Stay tuned for Part 2.