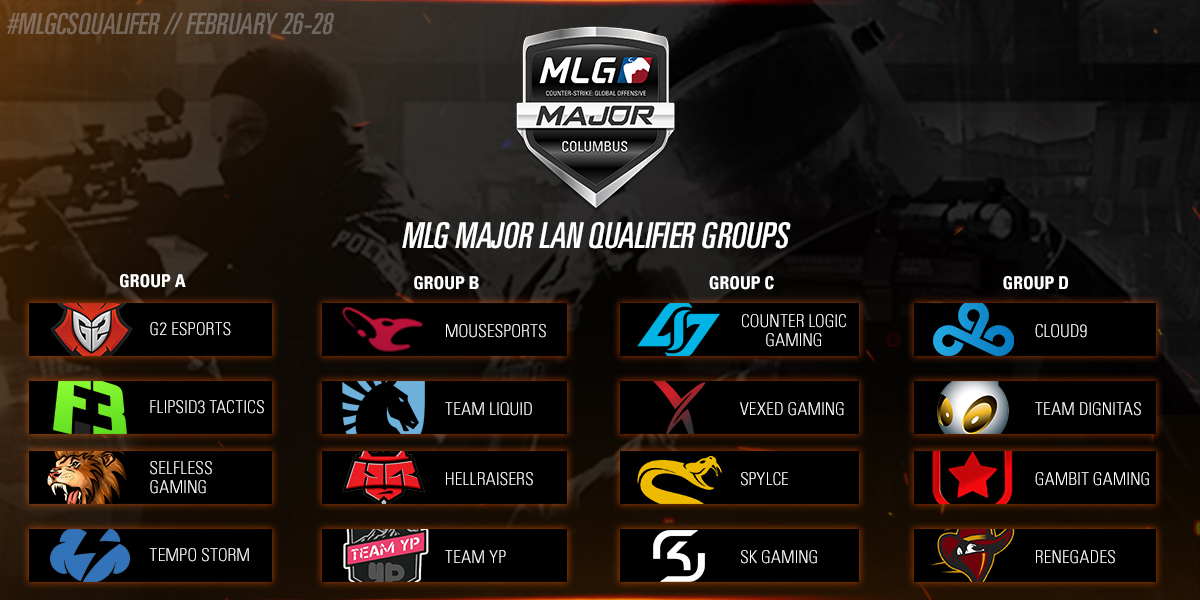 The first Counter Strike major is arriving quick and fast. With that, we need to decided which eight teams will accompany the eight “Legends” from Dreamhack Cluj-Napoca in MLG Columbus. In this preview, I will be giving a run down on the teams in group B and also providing predictions on what I think the results will be.

Mousesports is coming into this qualifier with a lot of momentum with some strong performances in this last month. In their last LAN, Acer Predator Masters 2, they were able to show there dominance of the other teams there by sweeping aside Team LDLC White and E Frag in bo3 wins. Then once in the final, they continued their dominance by winning a bo7 against Flipsid3 without dropping a map to take the crown. In online play, they were able to get a map off of G2 on overpass and almost beat NiP on overpass and cache but came up a little short. I definitely feel that Mousesports is one of the strongest teams at this qualifier with there overall LAN and Major experience. I will definitely be looking at Niko to see some strong performances and for him to really show that he is one of the best up incoming talents in Counter Strike.

Looking at this group for the first time, Liquid was by far the more interesting team that I saw. After picking one of the most talented players in the world at the beginning of 2016, S1mple, Liquid has suddenly become the United States best team. Yet to play there first LAN with this new lineup, it will be exciting to see how s1mple will perform for them. Liquid has been playing very well in online matches as they are currently on an eight map win streak beating which includes two bo3 wins against Renegades and CLG with a scoreline of 2-0. Although it was recently announced that their new addition koosta will be replaced by adreN for this tournament and the subsequent major, I don’t think that will effect them to much. The player I will be focused on is Elige to see if he can ignite his fragging power offline as he hasn’t had too much success in the past. However if that can’t happen, I still believe that with some Hiko clutches and S1mple plays, Liquid can easily quailfy for MLG Columbus.

Here is team that has had multiple successes in the past but I feel that they are long past their prime. Hellraisers was able to get a spot in this qualifier by winning the PGL Regional Minor for Europe. They were able to beat E Frag in the final by a score of 2-1 by winning on dust 2 and cobble. However there most recent tournament was the Acer Predator Masters 2 where I feel they were pretty underwhelming. Although they were able to score a big 2-0 win on Vexed, they fell flat by losing to Flipsid3 in the semifinal and even losing the 3rd place match to Alternate Attax 2-1. In my opinion, I feel that this team is simply just not what it used to be a couple years ago and therefore I cant really see them being able to progress from this group.

Easily the team with one of the more controversial names, Team YP is going into this group as one of the lesser known teams in the tournament. According to HLTV.org’s stats, they have only played two maps in all of 2016 which were against Ancient, Pronaxs’ new Swedish team, which actually qualified them for this LAN. This makes it very hard to judge this team going into this tournament and to know how good Team YP will show up. But this also gives them a wildcard factor as the teams in this group wont know what their up against in regards to play style and form. I will be looking to see how well DavCost, the former Flipsid3 player, will be able to perform as he is the only one on this team with some big LAN experience. I definitely feel that Team YP has the biggest chance in this group to upset and maybe stir up the pot a little bit.

Thank you for taking the time to read this article. My preview on Group C and D will be out Tomorrow.