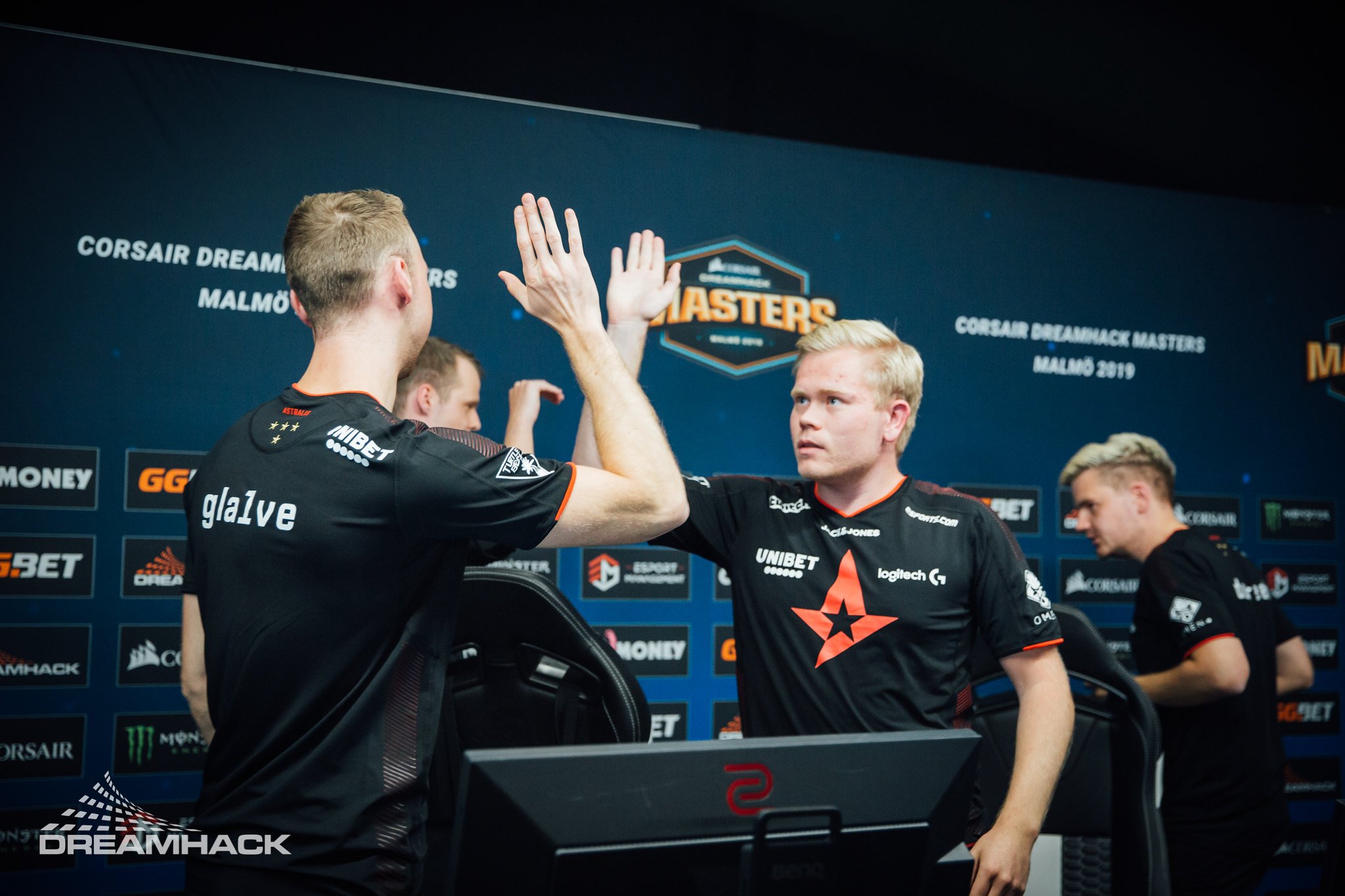 Astralis are on top of the world, but they were dethroned at the CS:GO ESL Pro League finals earlier in December, finishing in the top four.

Astralis came in third at the ESL Pro League finals after losing to eventual-winners mousesports in a close best-of-three. Although the Danes were unable to take the series, Emil “Magisk” Reif performed incredibly well, finishing with nearly 80 frags across all three maps.

Dot Esports spoke with Astralis rifler Magisk before the loss. The Dane discussed the preparation going into the event and the usefulness of the recent update. Considering Astralis are the best team in the world, adjusting to a new meta is critical. But since Astralis tend to innovate and adjust quicker than others, teams tend to copy Astralis’ strategies, according to Magisk. But the Danes still managed to stay on top.

Magisk also discussed the reasoning behind Astralis’ absence from certain events throughout the year and the benefits of this for his team.

I want to start with the recent meta changes with the price nerf to the Krieg and the buffs to both the Galil and FAMAS. How do these changes affect your team?

Magisk: Well, the update hasn’t really changed anything. The Galil is a little bit better. So that’s a small advantage on the T-side but I don’t feel like the FAMAS is that much better. It’s still an improvement but it’s definitely not good enough to the point where I feel like it’s worth buying. I would rather just play an MP9 with a lot more nades. I don’t know if it’s a good change, but it’s definitely an advantage on the T-side because you can buy the Galil and have full nades—you couldn’t really do that before. The Krieg has increased in price as well, which means that you have to really think about who’s buying the Krieg now because otherwise you might not have all the utility you need in that round.

So, it really depends on how much money you have, if you can actually buy it or not. In general, we have not been a team that has been focusing on the Krieg too much. I don’t really feel like it’s a bad thing for us. I think it’s more of a good thing for us because now other teams can’t use it as much. Other than that, I don’t feel like the update changed anything.

Do you think that this update benefits your team, especially when compared to other teams that may rely on the Krieg?

Obviously the Krieg is extremely controversial in the meta, but do you think the Krieg nerf was enough?

It’s tough to say. I think everyone is already slowly getting used to the meta and how it’s played right now. It’s definitely different from what it used to be. Now, the CTs can’t just take all-in duels anymore because the Krieg is so good and works well at long, close, and medium ranges. It’s good in all situations, just like an AK-47, just even better. So, for the CTs, it’s definitely bad because you have to think about how you play. You have to flash a lot for teammates now and you have to play in setups. Usually, before the update, you could get like two to three kills. But now it’s a bit different because the Krieg is so good. You might get one, but then you get traded instantly because it’s so good.

I mean, you could nerf it a little bit more to make it on the same level as the AK and the M4. Or,  you would have to make the silenced M4 better because the weapons on the T-side are favorable compared to CT weapons. The other thing is that, obviously, if you win a lot of rounds on the CT-side you can get Kriegs. The whole thing actually swaps because both the Krieg and the AK are really good weapons on the CT-side. For example, on Inferno, we don’t really buy that many Kriegs because it’s so good on the CT-side.

So that’s some of the small things that we are trying to adjust to. What maps, what positions should it be bought on, etc. So that’s something we always think about and trying to slowly try and minimize the damage done to ourselves by losing.

You mention all these changes and small adjustments to the meta, but you have stayed extremely consistent. What’s the key to your good form?

We are really good at finding out new ways to play around different metas. We always try to stay ahead of the meta and figure out what can we do now to get even better or what can we do to change some things and make sure that people aren’t prepared for what we do. Even sometimes when we find solutions to stuff that people are doing against us, the next match we play against them they have stolen everything from us and they’re using it against us and they’re winning rounds because they have stolen a strategy or a way to use a Molotov to extinguish a certain smoke like the wall of smokes on Nuke, for example. So suddenly we are losing rounds to our own stuff.

That can be frustrating sometimes, but that’s the way it is. So we always try to figure out and find new solutions. How can we get better? How can we find a way to play around the playstyle that they are playing? So I think that’s what we’re really good at. We have a lot of thought process into what we’re doing. We don’t just rush, if we do a rush, it’s because it’s calculated. There’s a reason behind it. On Inferno against Liquid yesterday we were fighting for banana control and then I saw there were three guys at B because they did a certain Molotov and we’re like, “OK, they’re playing three B-site so we rushed A.” We lost the round, but that was a bad individually [laughs].

Sadly we should’ve won that round and it would have changed the outcome on Inferno as well. But that’s small things we always do. Like we don’t just rush without a reason. We do it because we know it’s a good idea.

You mentioned that certain teams copy your strategy, but is there a team that’s on your level in terms of tactical Counter-Strike?

I think in general, Team Liquid has been doing the same things as we have done for a long time now. I think they are the closest team to figure out what is the best solution for staying on top for a long time and finding ways to come back all the time. Outside the game, inside the game, they have a good tactical way of playing as well, so they can be frustrating to play against. But I also think a team like EG has been really good at finding new ways of playing the game and finding new ways to punish teams. Overall, I think those teams are the closest to us.

I want to differentiate between Astralis and EG because you don’t attend as many events as the North American side. Can you explain your reasoning behind the lack of attendance at some events?

I think if you want to stay on top, you have to have a normal life outside the game as well. You need to be able to see your family and your friends. Everyone on the team has a girlfriend, they need to have time with them and feel good about themselves and actually it’s bad if you just stay in front of the computer all the time and you can’t have a social life.

I think it’s important if you want to perform on the highest level that you need to be able to feel good about yourself, to feel like you’re in the right place in your life. So I think that’s one of the reasons that we have been skipping events. But also so we have more time at home to practice, make sure that we figure out solutions to mistakes that we were doing, making new strategies, figuring out what stuff we can steal from other teams. We need time at home to find that stuff. You can’t implement a new strategy without trying it in practice and if you are just in tournaments all the time, traveling from one to another, you won’t have time to implement it into your playstyle.

So I think it’s important for us to have a life but also a life on the road, which is us travelling to tournaments. I think we’ve done a good job at finding out which events we should attend and which events we shouldn’t attend. I think you can always make a better schedule, but sometimes it can be tough to make it perfect to figure out what is best. So we’re definitely going to try and do that next year as well and figuring out what is the best solution for us.