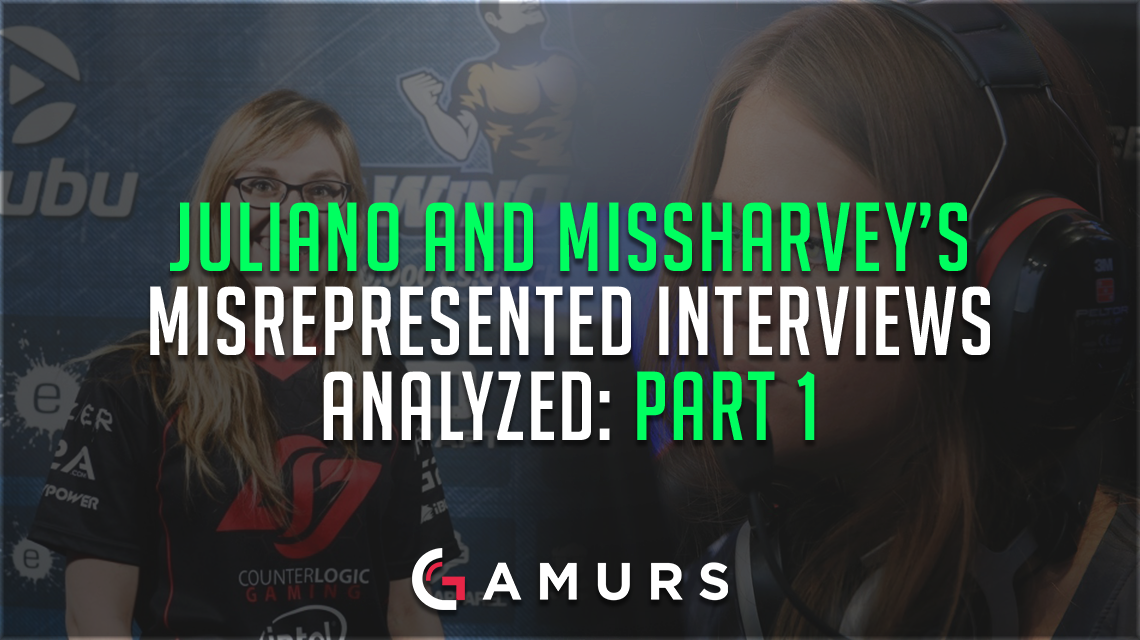 In a recent editorial published by BBC News, the issue of sexism in esports was addressed in an exceptionally poor manner. Through interviews conducted with Stephanie “missharvey” Harvey and Julia “Juliano” Kiran, the major news outlet intended on pushing an agenda portraying esports as a misogynist industry aimed at degrading the careers and aspirations of female players. Harvey is a player for Counter Logic Gaming Red and Kiran is the in-game leader of Team Secret’s Counter-Strike: Global Offensive team.

Since the author of the piece has not been explicitly stated, my suspicion is that they wished to remain anonymous to prevent direct backlash towards their name. The following will address and analyze the misconceptions evident in the written publication.

The introduction’s mention of “harassment” and “a huge gender pay gap” in “the world of professional gaming” is largely false. No professional Counter-Strike players have been accused of any sort of assault or harassment. The disproportionality in wages between males and females is solely due to the absence of female teams at large events with grand prize pools. I’ll discuss this topic later on.

“Recent research by the Pew Center shows men and women are equally likely to say they play video games but men are twice as likely to consider themselves ‘gamers’.” -BBC

In the Pew Research Center article cited, it says that “men and women are equally likely to assume that most video game players are men regardless of whether they themselves play games.” The BBC article inserted a “gender-centric” claim towards the end to further their initial claim of misogynism. Their skewed statement paints a picture in the reader’s mind that men are overtly domineering and condescending.

When discussing the problem of abuse, the statements written may seem extremely dumbfounding at first glance. To your everyday gamer, it may seem like “meme-ing” and banter amongst anonymous friends. Personally, I may just be desensitized to online trash talk, but I cannot speak for Harvey and Kiran about their opinions on how they’re treated online in-game and/or on-stream.

Their mention of objectifying and harassing comments have a lot of worth, and this part of their article upholds the truth of abuse towards women online. As a side anecdote, I’ve played competitive matches with girls and experienced immature toxicity from anonymous guy teammates directed towards them. The majority of the girls I’ve played with are smart enough to press the mute button.

This is arguably the most confusing portion of the article, as the majority of it seems contradicting. Initially, it left me thinking, “Is it really juliano and missharvey saying this? Or is this BBC twisting their message?” I’m assuming the majority of it is a collection of ideas founded by the author, who seems to be bent on corrupting public opinion of esports. The apparent divide in tournaments for males and females is what I want to be more careful about (since I don’t want to dive into a social issue in an esports article). In my opinion, female teams should try their hand at competing in major tournaments against other top teams (even if they aren’t ready), and that tournaments specifically meant for females should be eradicated. This premise eliminates the short-term problem of “gender divides” and the long-term problem of “disparity in earnings.”

“The rarity of female gamers turning professional is also connected, Steph believes, to the history of games development which has seen the creation of games dominated by men and so despite esports not being physical ‘they focus on spacial awareness and reflexes, skills often stronger for men,’ Steph says.”

Although the early years within the industry of games development may have had an absence/non-leading role of females as protagonists, this does not hold true for some esport games, such as Overwatch. If you’re thinking of the non-human heroes as “gender-neutral,” then technically the amount of female heroes (D.Va, Mei, Mercy, Pharah, Symmetra, Tracer, Widowmaker, Zarya, Sombra; nine) and male heroes (Genji, Hanzo, Junkrat, Lucio, McCree, Roadhog, Soldier: 76, Torbjorn, Winston; nine) is the same. In regards to the ending statement made by Harvey, it sounds entirely nonsensical and taken out of context. The bias in this article is too blatant to not acknowledge.

Overall, I think juliano and missharvey’s messages were significantly powerful (or at least what we got of it). The treatment of women online is an excruciatingly hard problem to solve, and it’s not easy being a girl when online brats are driveling at the thought of playing with someone of the other gender. I hope to learn more of their ideas later on.

This is Part One of a two-part series looking at the problems within BBC’s publication. Part Two will discuss the content proposed in their video.