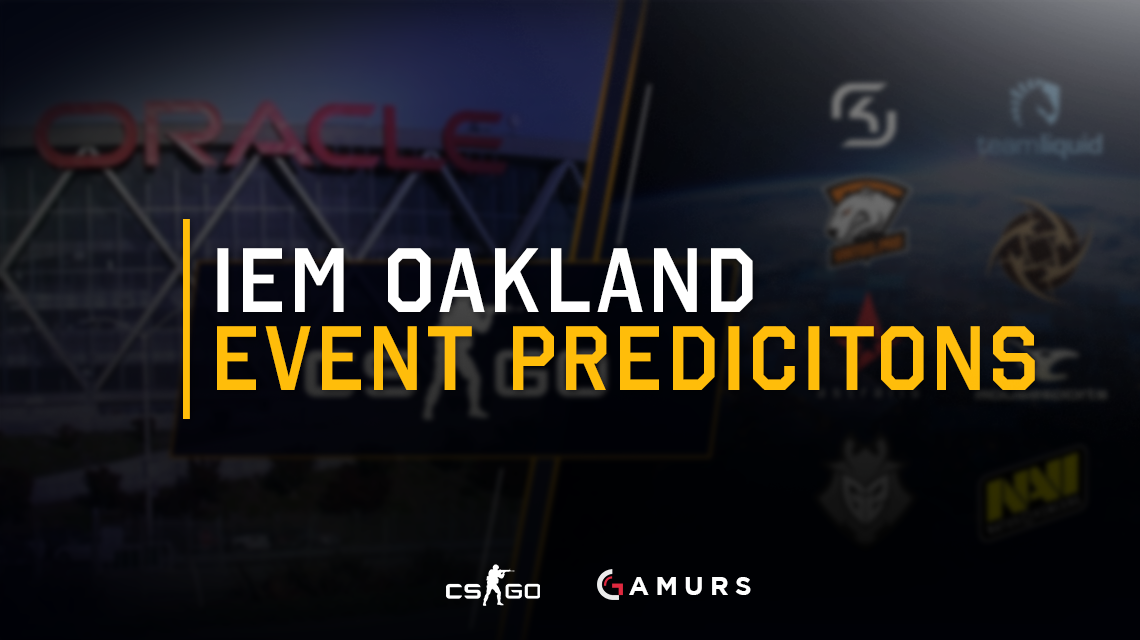 Instead of just focusing on one person’s predictions, this time around, I asked different members of the GAMURS team for their top-six predictions and a little bit about why they think the teams they have chosen will got there.

First up is @GAMURS_Tyler, a member of our social media team and an avid Counter-Strike player.

Lench said on his picks, “Without Virtus.pro, Na’Vi and SK are the most talented teams here and will look to continue their strong form. C9 is coming from a win at the ESL Pro League and will struggle in a difficult group, but could make a run if they get a good playoff draw. G2 is in desperate need of a good tournament after losing Northern Arena and several other disappointing showings since ECS. Astralis and NiP are proving to be amongst the most consistent teams this year, so they should do well again.”

Next is @TheJamesMattone, a sports commentator whose is pursuing his new passion in esports, has joined the lighter side of esports to share his views:

Mattone stated that: “Immortals looked absolutely hot out of the qualifier, taking down a top-five side in Cloud9, as well as a few other rising sides. I believe that this is the tournament where they come alive after a disappointing finish in the NA Season 4 Finals. SK is still the best team in North America, despite Cloud9 taking home that ESL title. They’ve been consistently good, however, getting a win here will cement the team’s status as a #1 side.”

“Otherwise, I see C9 falling hard after being shell-shocked by Immortals and losing to a few second tier sides, but I still see them in top-six,” Mattone continued. “Natus Vincere is another team I’m not so hot on, and I see them making the cut line before exiting first in the top-six. This tournament is also NiP and G2’s time to shine, as NiP is getting hot before this event, while G2 wants to get some revenge after barely missing the ELEAGUE cut line.”

@GAMURS_tnm has made some pretty good predictions in the past and here are his predictions:

“I had a tough time with Group A,” Bradley said. “My heart says ‘Pick TyLoo‘ but my brain says ‘Go for Immortals’ so if TyLoo does make it through, I have my bases covered. I feel like Group B is more straightforward, It was between Heroic and NiP for that third spot in the group, as both teams have relatively new rosters. However, I’ll give it to NiP this time as I feel they are the stronger team currently. I did consider mousesports alongside Heroic/NiP because it is a best-of-one format but the addition of LoWel still feels too fresh. When it comes to my top-six, G2 and NiP have been struggling recently, whereas C9 and IMT have been on the rise. SK seems to have some internal problems affecting their game right now, hence why I am edging this one to Na‘Vi.”

Here is @TheMaestroOfCS, a writer for one of the GAMURS family publications, Stronghold.gg. Here are his predictions:

Here is what Reece has to say: “Despite having a bit of rough form recently, I believe SK Gaming can return to the throne, as the absence of the only team who could stop SK in Virtus.pro should see SK through the tournament due to raw talent. Natus Vincere comes in second, and despite the good form recently at New York and in the ECS so far, I don’t think they can beat the Brazilians when they are at their best. Coming in third is Astralis, a team who has recently stepped up after a great performance at ELEAGUE, beating the major champions SK. If they step it up, they can do well in this tournament. Cloud9 comes in fourth for me, as their recent performances have shown that since the addition of Tim “autimatic” Ta, the Americans have destroyed their NA competition. Speaking of additions, the addition of Karrigan for FaZe has proved to be a great move, but since their roster is ever changing, the chemistry may be a little off for these guys, leading me to put them in fifth place. Finally, I put Immortals in sixth, as their recent performance at the iBuypower Masters has shown that they do have what it takes to beat the top teams.”

The final predictions come from another writer for Strongholds, @ShaRp_OW. Here is what he has to say:

Sharp said: “I believe that despite recent struggles at ELEAGUE, Na’Vi is poised to take the trophy at Oakland. The scoreline in Brazil is deceiving as the finals were not a close game. Cloud9 should have won Overpass and won the series 2-0 in dominant fashion as SK was not playing how they usually do. However, I do not believe that Cloud9 will beat NaVi. A key factor in the game versus SK was autimatic, who was performing much better than he usually does. This will not always happen and if you compare both teams head to head, Na’Vi has the better players. Mousesports has been showing good form recently and I think they will continue to stay around the same, placing third or fourth at this event. Immortals and Astralis have both shown potential, but I do not think that it will be enough for them to make it farther than the initial group stage.”

Those are a few of our predictions. Overall, it seems that the GAMURS family has SK and Na‘Vi in the top-two, but who do you think will take IEM Oakland? Let us know in comments below and for live CS:GO coverage, make sure you are following us on Twitter, @GAMURS_CSGO.

If you agree or disagree with what we had to say, make sure to send us a tweet @GAMURScom with your own predictions.