Most prodigies achieve a bit of success before dipping their toes into bigger leagues. Robin “ropz” Kool came out of nowhere, however, and became one of the best CS:GO players in the world in less than two years.

Ropz was an avid first-person-shooter (FPS) player and played all kinds of games from the genre, including Call of Duty on a professional level. He committed to playing CS:GO in 2016, but he’d have to balance between school and make do with an old computer, making it more difficult for him to shine. Ropz kept on playing in small-time online tournaments and practiced daily until he made it to the Challenger-tier of Faceit’s in-house league (FPL).

FPL allows all the top-tier players from a region to play together and is an excellent way for new talents to show themselves. Shortly after Ropz joined the league in 2017, he won and was even accused of cheating by household names like JW. Soon after a strong showing in the league, Ropz was recruited by Mousesports, one of the top teams from the European region.

Though he mainly focuses on his studies and keeps up with the scrims, Ropz still occasionally tries to stream on Twitch. If you’re aiming to become the next sensation of the CS:GO scene, then you can learn a ton from the generation before you. Copying Ropz’s settings will allow you to understand his movements and in-game decisions better.

Most professional players spend hours optimizing their settings, but some can still be up to personal preference, so don’t hesitate to make any changes you see fit. 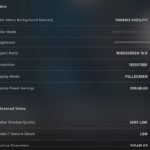 Ropz prefers having a delicate balance between accuracy and speed when it comes to his mouse sensitivity settings. While higher sensitivities can feel more natural and ensure easier flick shots, it may make it significantly harder for you to stay on point.

Keeping your Polling Rate on 1000 Hz, like ropz, will ensure you have the least possible response time between your actions, making it easier to react.

Until he became a professional CS:GO player, ropz played with a mediocre PC with an unstable connection. He grew accustomed to playing with lower settings, as a result, but doing so also has its own set of perks.

Playing with the lowest settings will help you achieve frame rates above 240, enabling monitors that feature the same refresh rate. Such monitors will refresh the image on your screen faster and more, helping you see more quickly than your opponents using regular monitors even if it’s for a millisecond.

To use ropz’s crosshair settings, you can copy and paste the following commands into CS:GO‘s in-game console. Press enter after pasting, and your crosshair will change to ropz’s.

Console changes may not always be permanent, however. Paste the following commands into your “config.cfg” to avoid going through the same process every time you launch CS:GO.

This file will be located under your “Userdata/SteamID” folder.

More screen space means you can spot enemies better with fewer distractions. Viewmodel settings allow players to reduce the amount of space their gun takes on the screen.

Like ropz’s crosshair settings, you can also paste the following commands on your console, config, or autoexec file to adjust your viewmodel settings.

When you move in CS:GO, your gun moves with you as well. This animation can become distracting if you’re also trying to land shots as well.

Bobbing or cl_bob settings reduce this gun movement. Simply paste the following commands into your console or “config.cfg” to use ropz’s bobbing settings.

You can also further customize them by adjusting the numbers attached to each line.