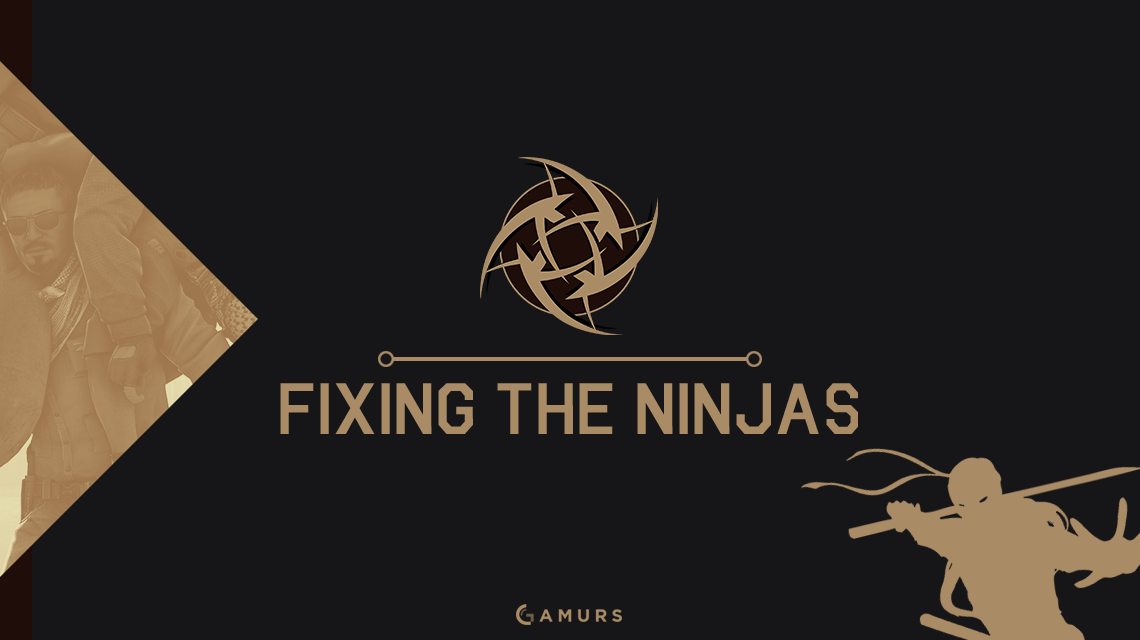 Ninjas in Pyjamas is a legendary name that most professional Counter-Strike players respect, as they should. They dominated the first year and a half of Counter-Strike: Global Offensive, managing to win their first 87 maps on LAN in a row; yes you read that correctly, in a row. Although you could argue the fact that not as many teams were as good as they are now, the dominance was still very clear. You could never count NiP out of a match, they could even be down 13-2 against the second best team in the world, and still pull it back. NiP was the absolute king of clutch, and ruler of CS:GO.

However, times have changed and new titans have arised. First in their own Swedish bretheren, Fnatic, and now in the Brazillians, SK. NiP are no longer the dominant force they once were in CS:GO and quite frankly, look to be on a downward trend. I believe I have the remedy for such a tragic epidemic; I believe I can “fix the Ninjas.”

In order to fix a problem, you first need to identify it. There are a few problems that are clearly visible to us as spectators, as well as some problems you could potentially theorize. The obvious problem even the common silver could spot is that quite simply both of their primary firepowers are slumping. Christopher “GeT_RiGhT” Alesund and Patrik “f0rest” Lindberg have been the two best players on NiP ever since they joined at the beginning of CS:GO. Sadly, I believe the old legends still are the two best players, even through their bad streak of form.

If you look at the other top tier competition, all of them have some form of depth. The worst player on Natus Vincere, in my personal opinion, is Denis “seized” Kostin. Also, in my personal opinion, seized could be a top-10 player in the world if he was the star of Na’Vi. So you can see the problem with the Ninjas in terms of depth. Now, as I said, GTR and f0rest are still the two best Ninjas, so let’s look at the other NiP players.

While he may be known as one of the all-time great entry fraggers, and helped greatly in bringing home ESL One Cologne 2014 for the Ninjas, friberg needs to go. If you were to look at his last 10 LAN maps, his total KDR is 136/185; to give a comparison, Epitácio “TACO” de melo, the worst player on SK over his last 10 maps is 191/164.

Now some may argue that friberg is the entry fragger, so he should get a free pass to not frag as much. However, if you look at recent NiP maps, he barley gets entry kills anymore. In fact, I think that TACO gets more entry kills than friberg, and he still performs better than friberg. friberg needs to be replaced.

Now how could we replace friberg? Well, we have established we need more firepower and I personally think that the only Swedish players the Ninjas will be able to acquire will have to either be from Epsilon or GODSENT. I believe, the best player in this bunch is by far Andreas “znajder” Lindberg. He would be a suitable replacement, as a secondary AWPer that will trade back and forth with f0rest. He is a very skilled player that could potentially be the best on this team, so I see this as a great way to add some depth.

It’s a miracle that Xizt is still playing for NiP, especially after the addition of Björn “THREAT” Pers as the in-game leader (from coach position). His only good LAN tournament since 2013 was DreamHack Masters Malmö 2016. He has been a shaky player for a long time now, and I see no reason to keep him. Admittedly, he is a very good clutch player. He is very explosive, and has potential to win 1v3s and so on. This is why I value him over friberg, but still want to replace him though.

Now the person I wish to replace him with may throw you off a bit at first, but hear me out. I am going to replace Xizt with Markus “pronax” Wallsten. I can already feel the impulsive 13-year-olds starting to type “BUT THREATS THE IGL FOR NIP!” We will get to that in due time. In the meantime, I will say that pronax should be the new In-game leader for NiP.

Pyth: the new kid and the fifth ninja. To be honest, there is not much reason to replace him. He does his job, and he does it well. Pyth supports the other players of NiP. I think there is another Swedish player, however, who we have seen on this lineup before that could do a better job of being support in the context of fragging. That is right, ladies and gentlemen, you guessed it, we are bringing back Fifflaren.

On a more serious note, the player I acutally think should be picked up is Mikail “Maikelele” Bill. Now don’t get me wrong, if I thought it would be at all possible, I would snatch KRiMZ. Really though, it is not at all possible. So, the suitable replacement, Maikelele, will have to do. He is probably the second best Swedish player at being dedicated to the support role and still fragging decently.

Admittedly, toward the end of his time on FaZe, he did not perform very well. He will be my support player so he does not need to have stellar performances, we will leave that up to GeT_RiGhT, f0rest and znajder. At the same time, I could see you making an argument to just keep pyth. He is not bad by any means, and I see the two (Maikelele and pyth) as interchangeable based on what the other four Ninjas would want most.

The other problem with the Ninjas currently is that THREAT’s system has appeared to have stopped working. As a result, I am going to have pronax take over the in-game leading role, and THREAT will also be cast aside. But who should replace Björn, you may ask? Well to answer that, we are going to look at history, the history specifically of pronax.

Kudos to you if you guessed I would be adding in Jonatan “Devilwalk” Lundberg. From pronax’s history with Fnatic, we know he works best under the influence of his good friend Devilwalk. These two as a combo were very productive as an in-game leading duo.

The mid-round rotations and aggresion calls from pronax alone now in GODSENT are pretty fantastic from what I have seen. When he was on Fnatic, you could argue these calls were just as good, or better. During the Fnatic-pronax era, to this day, I have never seen a team rotate as quickly as Fnatic did on the CT side. He is by far the best in-game leader in the world at reading the mid-game, and he also isn’t that bad of a fragger. With Devilwalk by his side, these two will make great things happen for NiP on both the Terrorist and Counter-Terrorist sides.

This is how I propose we fix the broken Ninjas; for those of you wondering, the Ninjas (specifically GeT-RiGhT) would like to keep an all Swedish lineup. This is the reason I did not re-add allu. Before this lineup could become truly great, GeT_RiGhT and f0rest will need to return to form, which I forsee happening once the players come back from the player break.

In the meantime, I still think this team will have a solid campaign to being a top-10 team, and quite possibly, even top-five. Please, if you have any suggestions on changes to make, leave them below; however, I believe that this is the best way we can fix the Ninjas in Pieces.

Yay for my first article, I would very much appreciate any feedback!