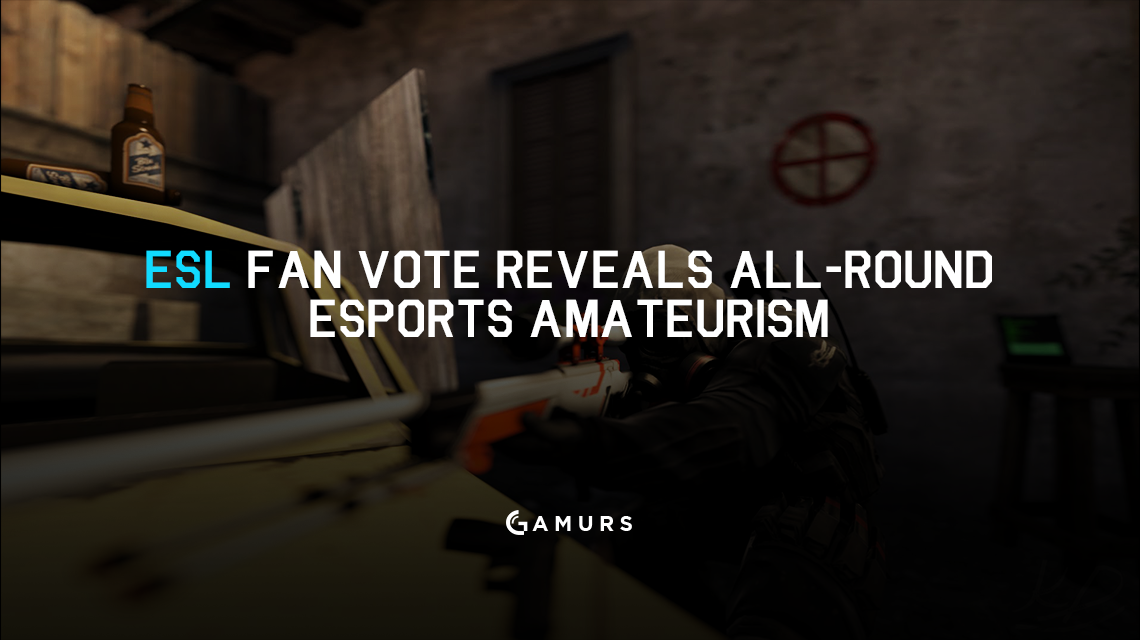 On Aug. 9, ESL announced that Virtus.Pro, GODSENT, Luminosity Gaming and Echo Fox won their respective regional fan votes and will compete for finals slots in the ESL Pro League. While the fan vote correctly picked the two strongest teams for the league on the European side, the absence of Team SoloMid in the North American qualifier has earned the ire of the community at large. ESL’s decision to use a fan vote was more than questionable. It highlighted the company’s continued reputation of obtuse inefficacy and apparent duplicity. By all means, the superstructure set by ESL already enabled the inevitable letdown, but the event also highlighted TSM’s own inequities in their public policy and the community’s unwillingness to move beyond individual nationalism and fanaticism.

In the first round of the League of Legends division of IEM San Jose 2014, a TSM team who had recently placed top-eight at the World Championship faced off against Unicorns of Love, a relatively unknown team who had only just recently qualified to participate in the professional European circuit. The Unicorns had only qualified for the tournament via the fan vote. Their peculiar name and their highly unorthodox picks and playstyle instantly made the team fan favorites during their qualification run, despite the obvious shortcomings still in their play.

Unicorns of Love defeated TSM 2-0, in one of the more memorable upsets in LoL history.

There are some minor redeeming factors to a fan vote. It can give less skilled teams a seat at the table, which can of course lead to highly entertaining matches and upsets. But a concept I’m sure no one would argue is that the fan vote best determines the worth of specific teams or guarantees the highest level of competition. Instead of designing a system that would best spur competition, which should be the duty of league organizers, the fan vote takes decision making out of the hands of responsible parties and instead passes it off to mob rule.

Choosing to pass off responsibility in this specific case reeks of either cowardice, favoritism, or both. Why wouldn’t a responsible decision making body choose who would play whom in the wild card matches? Why wouldn’t they give the chosen four teams of each region an opportunity to simply play it out? Would that better reflect a team’s worthiness? Either ELS wanted to absolve themselves of that decision making responsibility out of fear of community reprisal or they instituted a vote to ensure that their interests were more easily realized.

Virtus.Pro’s absence for the ESL Professional League is bizarre given their apparent skill level, but they have not performed as a team online in 2016 and have fallen out of the professional division due to their own shortcomings. Given the popularity of Virtus.Pro, a fan vote followed by a single match rather than a full promotion series gives them the best chance to reenter the main league. If ESL wanted to make executive decisions to best maximize the quality of participants in the league, that’s their own propagative, but to institute a fan vote in order to obscure their intentions and diffuse responsibility is certainly more reprehensible. What’s worse is the adoption of this system, probably to ESL’s own surprise, caused the disqualification of the very qualified TSM in the North American division, redoubling the apparent duplicity of instituting the fan vote in the first place.

Every right implies a responsibility; Every opportunity, an obligation, Every possession, a duty.

Not winning the fan vote accentuates the previously established perception that the TSM organization is negligent of their CS:GO division. For several stretches in 2015, many commenters noticed that the main Twitter account of TSM didn’t properly cover the significant accomplishments of the original Danish lineup. The lack of social media output led to the firing of TSM’s manager, Frederik Byskov, which apparently led to some friction between the players and the organization. The players insisted on keeping Frederik on as a manager, paying his salary out of their own pockets, possibility souring their business relationship with the TSM organization.

When it was announced that this new rendition of TSM had lost the fan vote, many community figures blamed the TSM organization’s lack of social media actions for their ultimate dismissal.

Including retweets, the official TSM twitter account made 12 tweets during the Aug. 2-7 period when voting was still active, and only four of those tweets called for user participation in the fan vote. Both the CS:GO players and some of the larger LoL personalities retweeted those tweets made by the main TSM page. Over the same period, Echo Fox was significantly more active on Twitter, but only tweeted out the link to the vote twice. Luminosity was much more proactive than either team, tweeting out the link 10 times, but again, the Luminosity account posts far more frequently.

Obviously, TSM could have done more to win the vote. They could have tweeted more, asked their bigger personalities to make their own original tweets which included the link, made a short video calling for participation, or taken a multitude of other steps. But generally, the ineptitude of TSM’s social media campaign has been greatly exaggerated. Tweets were frequent in context with their quantity of social media output and those tweets were properly signal boosted by coordinated retweets from their players in multiple games.

The larger problem, I see, is their inconsistency in message following the end of the vote.  After the results were announced, Hunter “SicK” Mims tweeted, “How about a four team tournament and seed the teams based on results. But I guess that’s too much … Let’s have popularity votes,” before adding in an additional tweet, “Demotivating when stuff like this keeps stopping me from playing a league. Wish we could just play the game to see who’s better.” TSM made several tweets calling for participation in the vote, which were retweeted by SicK. If SicK or TSM wanted to reject or openly protest the anti-competitive nature of the fan vote, why not establish that stance initially rather than take it up after you lose the vote when the argument suits your own ends? To support the fan vote during its lifespan then protest its existence after losing looks fairly hypocritical.

There is no grievance that is a fit object of redress by mob law.

Following the announcement of the fan vote results, the number one post on the Globaloffensive subbreddit read, “Luminosity Gaming being given a chance to get into Pro League over TSM is an absolute joke.” The post acquired over 3000 upvotes and many of its 800 comments were harshly critical of ESL. There is a palpable irony here. The community is furious with ESL because the community’s own voting did not create the most competitive field possible. While the community can hardly be blamed for the adaption of this dubious system, surely some parcel of responsibility has to be passed on those who actually cast the votes.

In my results-based ranking of North American teams after ESL One Cologne 2016, I ranked TSM fourth out of all North American teams, excluding SK and Immortals, who I would have ranked higher. Since May, TSM have placed third at the second MLG Minor, top-four at the ECS Finals, second at the Summer iBUYPOWER Invitational, and took an upset map over Fnatic at ELEAGUE.

Echo Fox have yet to qualify for a LAN event thus far this year. They did compete at ELEAGUE through invitation, where they won two games in split best-of-two series versus Na’Vi and Flipsid3, which is nothing to sneeze at, but their results hardly compare to TSM’s recent run of form. Luminosity, who formerly competed under the WinOut brand, have similarly lukewarm results on LAN. In the second MLG Minor, they defeated Winterfox in a best-of-one before falling to Selfless in a close 1-2 best-of-three series, which eliminated them from the tournament. They have no other significant LAN appearances recently. While Luminosity has recently won a pair of minor online cups, they still have no LAN accomplishments remotely on the level of TSM.

Voting for Echo Fox and Luminosity over TSM suggests that fans prioritized nationalistic desires and player popularity over picking the most competitive rosters. While the cynic may say that the desires of the mob are uncontrollably fickle or unconnected to reason whole cloth, I find it distressing that the actions of the general public can be dismissed so easily. How fervently can we critique the actions of ESL, TSM, or any other party when thousands of decision makers made a conscious choice to vote for subpar teams to participate in a substantial league over far more qualified team?

Additionally, in the Reddit thread, several comments mentioned the possibility that this fan vote/wild card system too conveniently enabled fan favorites Virtus.Pro to renter Pro League play. Whether or not this was actually ESL’s intention obviously cannot be proven, but if this issue was a significant matter of importance to many fans, if they felt that Virtus.Pro was unfairly added to the ballot, why was that issue not addressed en masse prior to the final tallying of the vote? If many fans objected to their presence on the ballot, why were alternatives not chosen? If the community publically values competition over favoritism, why was that not reflected in the vote?