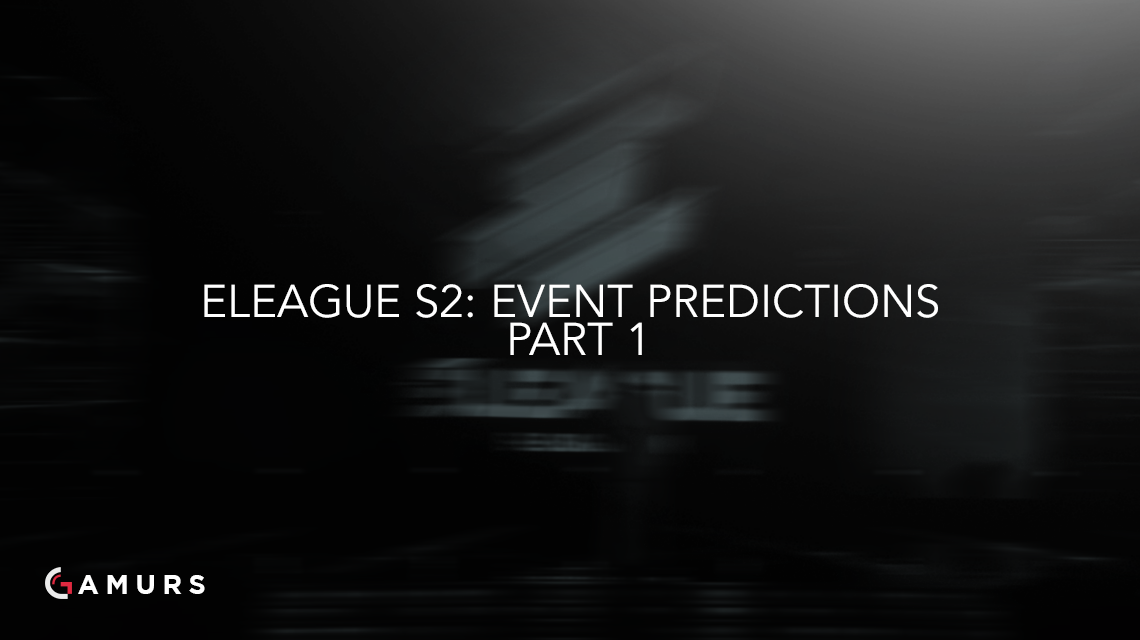 ELEAGUE, the future home of one of Counter-Strike’s greatest majors to come and the holy grail of televised CS:GO, hosts its quarterfinals this week. The playoffs will feature four best-of-three matchups between eight godlike teams, all at the top of their field because they are some of the best in the world.

The four matches are:

Held at the Turner Studios in Atlanta, Georgia, these teams will be fighting for $1.1 million and the chance to call themselves the ELEAGUE Season 2 champions. I am going to walk you through the first two matches, which will be held today, and do a follow-up piece tomorrow, talking about what we learned from these upcoming matches and my predictions about the other two.

While many have proclaimed that these last couple of months since SK/Luminosity’s victory at the major as “The SK Era,” I for one have never been convinced that they’d have a dominant reign similar to Fnatic or NiP. They always seemed to rely on tactics that set up their star players and it was only a matter of time before they started to have trouble with the more tactically-aware teams. That being said, they are still an insane five man lineup with a bunch of firepower, so I guess they have some of their bases covered.

Dignitas has been labeled as one of, if not, the best Danish teams currently competing, considering Astralis and Heroic have failed to live up to the standards we all came to expect. After winning EPICENTER: Moscow, an $300,000 event, and qualifying for the ECS Finals, an $750,000 event, the team’s chances are looking good. After being upset at the DreamHack Winter event, where they placed top-eight, their skill level has been called into question.

I, like many, wanted to give this straight to SK Gaming. However, after watching a video by Duncan “Thorin” Shields, my mind has shifted a little. As he correctly called out, Cache has been SK’s perma-ban for a while; it’s map they do not like to play. They also have a terrible record on Nuke recently, a map that Dignitas does not like to play. This means that SK will have to ban one these maps, meaning Dignitas can both ban Train (SK’s best map by far) and possibly pick one of these maps, giving them a chance to either 2-0/ 2-1 SK.

One map that could come up is Mirage, which is one of SK’s best maps, but it’s also the map that Dignitas beat both Natus Vincere and Virtus.pro on at EPICENTER to win the event. Another map that could come up is Cobblestone. This map could go either way; at IEM Oakland SK beat NiP on Cobble in a best-of-one, but lost the final map of the tournament to NiP. Dignitas has wins over Virtus.pro and Na’Vi, but has also lost on Cobble against teams like Astralis and even SK themselves.

Regardless, I think it is pretty clear that SK does not have a chance on both Nuke or Cache if Dignitas is firing on all cylinders. Cobblestone and Overpass, which will more than likely be the decider maps between them, come down to quick rotations on the CT side, monster games from your AWPers, getting first picks on the CT side, and holding retake angles on the T side. Mirage has been great for SK in the past, but Dignitas hasn’t been too bad on it recently either. If SK is going to win this, it’s either going to be a 2-0 with some overtimes or three, super close, action-packed maps.

Astralis vs. Ninjas in Pyjamas

This, for me, will be pretty straight forward: 2-0 NiP. NiP has just come off an epic win over the supposed gods of our era, SK Gaming, at IEM Oakland in a magical best-of-three that went the distance. 16-4, 16-14 and 16-14 were the final scores and it truly was an epic showdown. After a shocking defeat on Train, NiP bounced back and took down the Brazilian giants on one of their worst maps and then stormed their castle and stole the win from right under their noses.

The Danish squad seems incapable of progressing past third place. This team is full of talent, old and new, and yet nothing seems to ever come from it. They will be facing a Swedish lineup with more experience and formidable firepower, and their new in-game leader is happily back on the squad. They have had some impressive wins recently, with 2-0 victories over Fnatic, VP, G2, GODSENT and even NiP themselves. But, the key thing to note is that these games were online.

When it comes to maps, if either Cobblestone or Nuke is pulled, I fear for Astralis. Their best bet is to get NiP on Mirage, Train or perhaps Cache, but none of those matches are going to be easy. In my mind, it is going to take an extreme overperformance by the Danes. I personally think NiP has a great chance at perhaps taking this entire event, but we will just have to wait and see.

Make sure to check back tomorrow for my of my predictions and a follow up to tonight’s action. Let me know your feedback @GAMURS_tnm and whether you agree/ disagree with my predictions.