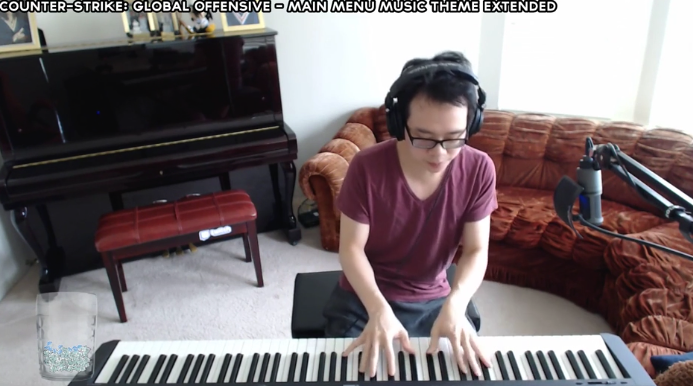 The 29-year-old streamer took piano lessons when he was five and has played the instrument ever since, his Twitch FAQ reads. He has a classic, wooden piano, and electric piano featured in his stream.

Chewie played songs he was given in his broadcast titled “Taking chill requests and playing them by ear.” Those requests could be “of all shapes, forms, and genres,” and they’d be rehearsed on the spot in front of hundreds of viewers. All this piano man needed was a headset and his streaming equipment to emulate CS:GO’s default background menu tune for the first time.

“I’ve never actually tried to play this,” Chewie said, as he tested out varying chords along each octave. “Listening to this makes it kind of sound like something from StarCraft.” He hummed out some of the chord progressions to himself before muting the song for his performance. Chewie harmoniously played almost two minutes worth of the song before stopping. It only took him about thirty seconds of experimenting with notes for him to improvise it almost perfectly.

“[The CS:GO theme] is pretty interesting actually. On a piano, it works,” he concluded. The popular meme song “Shooting Stars” by the Bag Raiders was next on his request list. Chewie’s rendition of the tune became the top post on Reddit shortly after he finished.

“/r/Global Offensive, you made my stream today something really special,” Chewie said in a Reddit post, as he thanked the CS:GO community for their support. He amassed about 3,000 concurrent viewers during his stream.