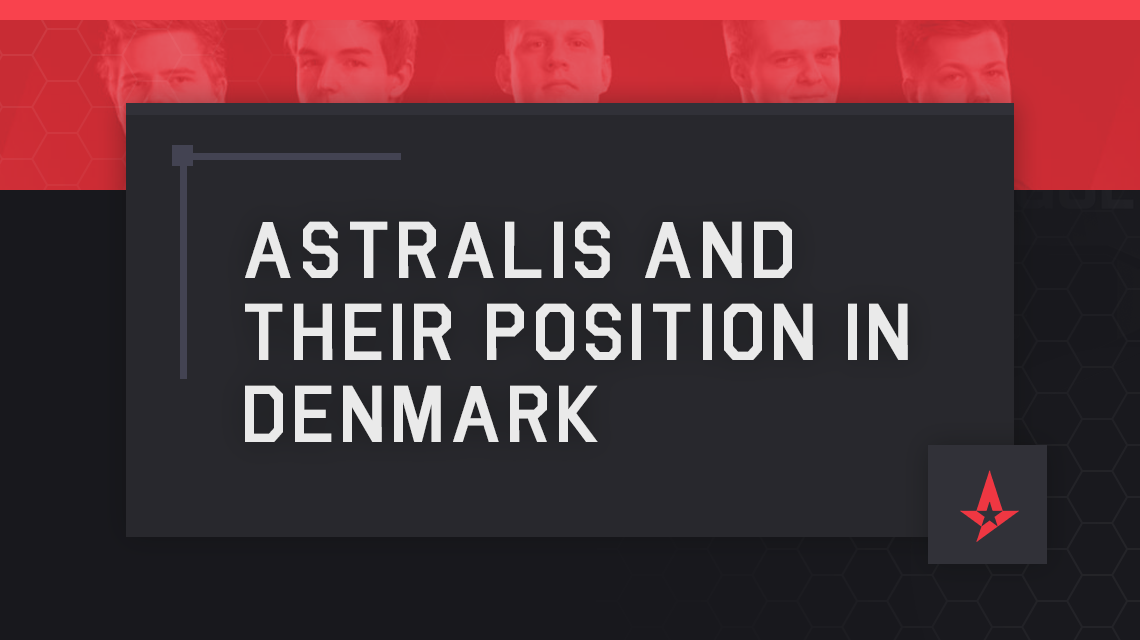 The Danish side Astralis were once the undisputed kings of their region, always being considered a serious challenger to win any international tournament and appearing on any analyst’s top five teams in the world list. Now, however, we’ve seen the final of an all-Danish tournament with the notable absence of Astralis in it. The disappointing end to Power-LAN for the Danes is another worrying sign of their decline in form, and could suggest a restructuring in the hierarchy of the top Danish teams.

Astralis approached last weekend’s Power-LAN 2016 as the obvious favourites. Their status as Denmark’s best team alone should be enough to have them pegged as favourites at any Danish tournament. Finn “karrigan” Andersen’s side have enough top tier tournament experience under their belt that a relatively local event should be Astralis’ to win, even if that local event did host teams from perhaps the most gifted nation in terms of Counter-Strike talent. Yet, we saw Astralis lose a spot in the Grand Final to the rapidly improving team Heroic, who seized their chance and defeated another Danish titan, Dignitas, to win the tournament and shock many in the community.

A fact that shows the magnitude of Astralis’ slump was tweeted a few days ago by lurppis, where he listed the best-of-three wins against top 10 teams that the Danes had collected offline in 2016. The list only included one team. The sole victim of Astralis’ respectable LAN wins was Fnatic, and this is simply not enough for a team wanting to be the best in the world. The lack of noteworthy results we used to expect from the core of Astralis is a sign of their decline and something they need to rectify.

The team who once threatened every side in the scene have been unable to put up the results needed for them to retain their title, crown and reputation. And while they doze, two other Danish sides seek to shuffle the pecking order and put themselves on top.

Both Dignitas and Heroic placed above Astralis at Power-LAN 2016, and while it is only the results from one small-scale tournament, the foundations for either of these sides to move up the Danish ladder have been put down. It is now up to Astralis to step up their game and provide some results to continue showing they are a stronger side than the in-form, well-rehearsed unit that Heroic are, or the strategical Dignitas side, led by the tactical thinker Mathias “MSL” Lauridsen.

While watching the tense and very even battle between the two player-formed organizations, Heroic and Astralis, at Power-LAN, the former proved they deserved their place in the Grand Final regardless of how close the score was. Lacking the star players that Astralis houses such as Peter “dupreeh” Rothmann, Nicolai “dev1ce” Reedtz and Markus “Kjaerbye” Kjærbye, Heroic triumphed because of the structured teamplay they displayed when attacking and defending bombsites. In a game as reliant on teamwork as Counter-Strike is, the heights that a structured squad like Heroic can reach are limitless.

Not only did Heroic debut their new organization in a victorious manner at Power-LAN, their online results of late have been a step up for them. In our weekly recap of the ongoing fourth season of ESL’s Pro League, Heroic can be seen at a respectable place in the league standings, and tied for points with their compatriots in Dignitas and Astralis. All of these recent successes for the Heroic players, and the tactical prowess they are showing under In-Game Leader Marco “Snappi” Pfeiffer, make them legitimate contenders to seize the top spot in Denmark should Astralis’ results not improve.

As for Dignitas, another Danish team who finished above Astralis at Power-LAN, their results this past weekend aren’t too relevant due to their use of a former player as a stand-in, Philip “aizy” Aistrup. Their results when playing as a full team have not been exceptional in the recent months, however, with the most notable failure being their inability to escape their group in the ESL One Cologne Major in July, despite facing an Astralis side with two stand-in players. This poor result on the biggest of stages undermines Dignitas’ claim to be above Astralis massively, and suggests that the newly formed Heroic may be the biggest threat to Astralis’ claim to the Danish throne.

Currently, I do not feel like either Heroic or Dignitas have done enough to overtake Astralis as the better team, even with Astralis’ lackluster showings. The Danes showed they are still a team to be reckoned with on Dust II at Power-LAN, as they schooled Heroic on the map that many once considered them to be the best in the world on. With a rock-solid CT half that left Heroic attempting similar bombsite takes over and over but to no avail, and a short but strong looking Terrorist half, Astralis showed that they still possess the talent on certain maps that made them one of the world’s greatest teams. They need to translate this to all maps when facing teams who, on paper, are weaker than them if they wish to remain the undeniably strongest team in Denmark. It must be stated, though, that without more series wins over top tier teams, Astralis could find themselves overtaken by either Heroic or Dignitas.

Due to their recent rise in form and the excellent coordination Heroic displayed at Power-LAN, I feel that for the first time in a while, Dignitas aren’t the second best team in Denmark. Heroic’s excellent teamplay propelled them to first place at the Danish tournament this past weekend, and their victories in the ESL Pro League only add to the impressive rise in form we’ve seen recently. The strong performance of an old face in the Counter-Strike scene against Astralis makes Heroic especially interesting to watch, as the prospect of Michael “Friis” Jørgensen finding his form adds to Heroic’s already high potential. This recently formed organization is definitely one to watch at the upcoming Northern Arena tournament on Thursday, where they will face tough opposition from the likes of Immortals, Cloud9 and OpTic Gaming.

Dignitas remain a constant threat to the other Danish sides, having a tested roster that has both strategical players like MSL and great aimers such as Kristian “k0nfig” Wienecke. However, their results of late have not payed homage to the strength of their lineup, leaving them the third best Danish team in my eyes. The team’s performance at Power-LAN can’t be analyzed too thoroughly due to them being unable to play with their full roster, but their Major and Pro League results suggest that the in-form Heroic side are in better shape than Dignitas. While Dignitas aren’t far behind Heroic, Friis and his men show no sign of stopping their inspired run, whereas Dignitas look deflated. Should MSL and his team step up their results, we could be in for a very contested Danish scene as these three team’s vie for their chance to be Denmark’s best.

Is Astralis still the best team in Denmark? Let us know by commenting below or tweeting us @GAMURScom.