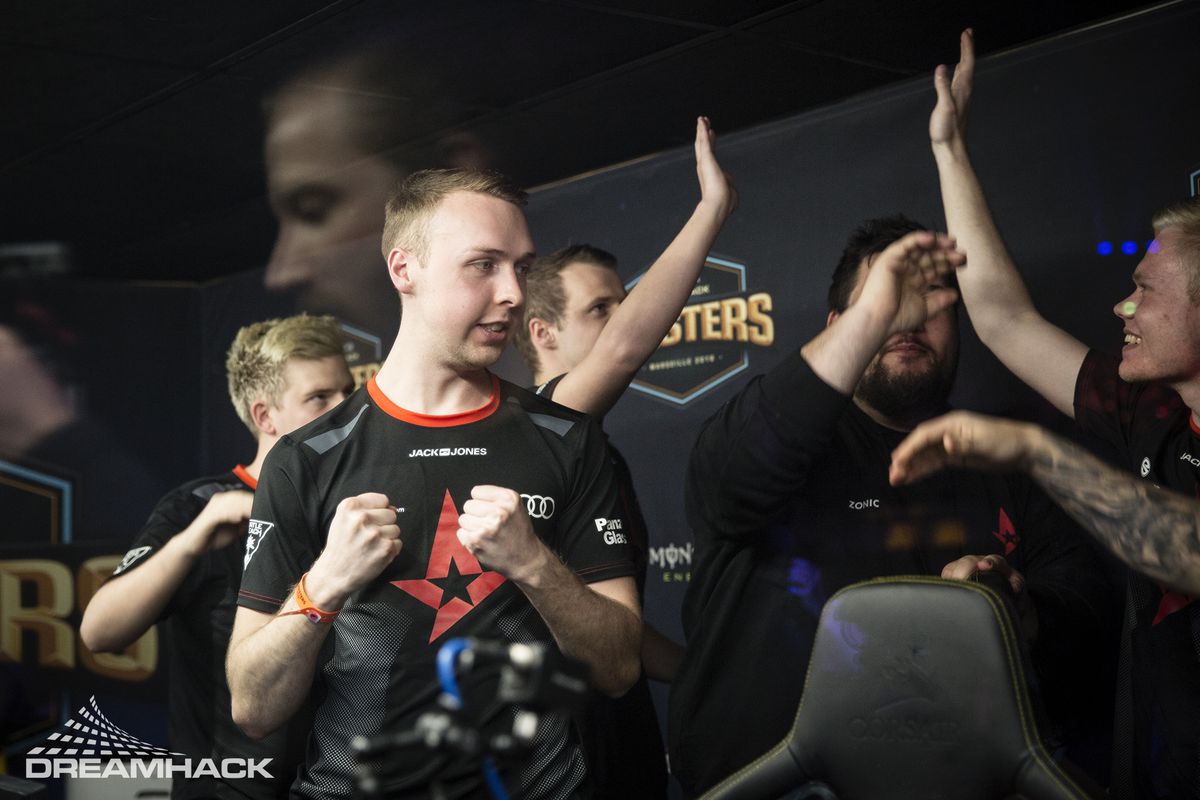 Astralis started off strong in the ECS Season Five Finals with a 2-0 group stage record, and they’re showing no signs of stopping heading into the playoffs.

The Danes began their weekend as the No. 1 seed of their group, defeating Cloud9 and Team Liquid in the process. They’ll be going up against their rival FaZe Clan in the semifinals, which is a rematch of their last few appearances in the past couple events—IEM Katowice, the ESL Pro League Finals, and IEM Sydney. Both teams are tied 2-2 in offline play so far this year.

Related: Astralis tops Group A at the ECS Season 5 Finals

Blaze “draulon” Lengyel from Unikrn: You are currently the best team in the world. What does it take to stay on the top, and how do [you] plan on achieving that?

Gla1ve: I think we are just preparing to do what we’re doing right now… We also know that we can’t be the No. 1 team in the world forever, so we have to just do what we’re doing… We also learned some things from the past that we know we shouldn’t do this time around—talking about practice or not being too hard on ourselves from games.

Unikrn: Who would you consider as your most fearsome opponents currently?

I think our most fearsome competitors are probably in Europe, we have Mousesports, [Natus Vincere], Fnatic, and FaZe [Clan] obviously. Then also in [North America] we have Cloud9, [Team] Liquid, and SK [Gaming]. I’ll say those seven teams [are] the ones probably as our biggest rivals… I think we have done a great job of taking the first spot in the world.

Unikrn: Several analysts have said that you have “figured out Counter-Strike.” Do you feel you are in top form right now, or are there still areas you want to research and improve in?

I feel like we are in top form now, yeah. Definitely. I think there [are] still things that we can improve on. Sometimes we still miss grenades [laughs] even though maybe everybody doesn’t see it. Sometimes I could do a better gameplay and gameplan from the beginning of the match, instead of me figuring out what to do in the middle of the match. Sometimes we get a really huge lead on the T side and then we start to lose some rounds, and I want to figure out why we lose those rounds. I know it’s just a part of the game, but I still think there are things that we can improve on…

Jamie Villanueva from Dot Esports: You guys are an obvious favorite in this tournament. How scary is it now that everyone wants to beat you?

Hm, I think it’s not that scary actually from the matches I have been watching from StarLadder in Ukraine. I think people have started to take some of our ideas with the grenade stacks, also took some of our tactics in pistol rounds and second rounds. So I see that people are stealing a lot of our tactics… We did that to ourselves to come on top, so that’s just how it is. So yeah, what we have to be aware of… plus we didn’t know how to counter [our own strategies]. And what we have been thinking about is what are we going to do when people are starting to steal our tactics… So while we do these tactics, we try to be aware of what is the counters to this so that when people do this against us we can counter it.

Dot Esports: Considering you guys don’t want the same sort of struggle as 2017 after you won the ELEAGUE Major, how does the team intend on maintaining consistent form?

So one of the biggest things is that we are not going to attend as many events as some of the other teams. Already now we have decided to skip StarLadder. We decided to go to [BLAST Pro Series] Istanbul instead of [ESL] New York not only because of the demands of the tournament but also because of jet lag. So we are starting to think about all of the reasons [why] we lost our No. 1 spot last year. Hopefully all these changes [are] going to make us stay on top for quite a while.

Dot Esports: Do you have any general thoughts on OpTic’s development, especially since they’re one of your biggest competitors from Denmark?

I think OpTic is a really good team. I think sometimes when I watch them, they are too heavy based on tactics, so I think what they need is some more on-the-fly calls or mid-round calls. Instead of just sticking to a gameplan, you need to adapt to what your opponents [are] doing all the time. That is where I see that they could evolve to maybe be the No. 2 team in Denmark right now. I think North is improving a lot [but] they are having a tough time…

Alex Yue from Blitz Esports: The big storyline in the scene seems to be the rivalry with FaZe Clan. How has this rivalry affected your preparation for this event?

It hasn’t affected us much because we actually knew that FaZe is going to be playing with [Jørgen “cromen” Robertsen]. It made the preparation more hard for us because we can’t really prepare against a team we don’t know how to play [against]…

Blitz Esports: What is your warmup routine before you play a big match on stage?

Every day we just go eat breakfast together, we go work out if there’s time with the whole team together, and then we just start preparing for the matches watching demos and stuff… and then we have some rituals that we do as a team. It varies from player to player, [like if] somebody wants to have the right underpants on [laughs]…

Note: Portions of the conference call are cut out due to technical issues related to the audio.