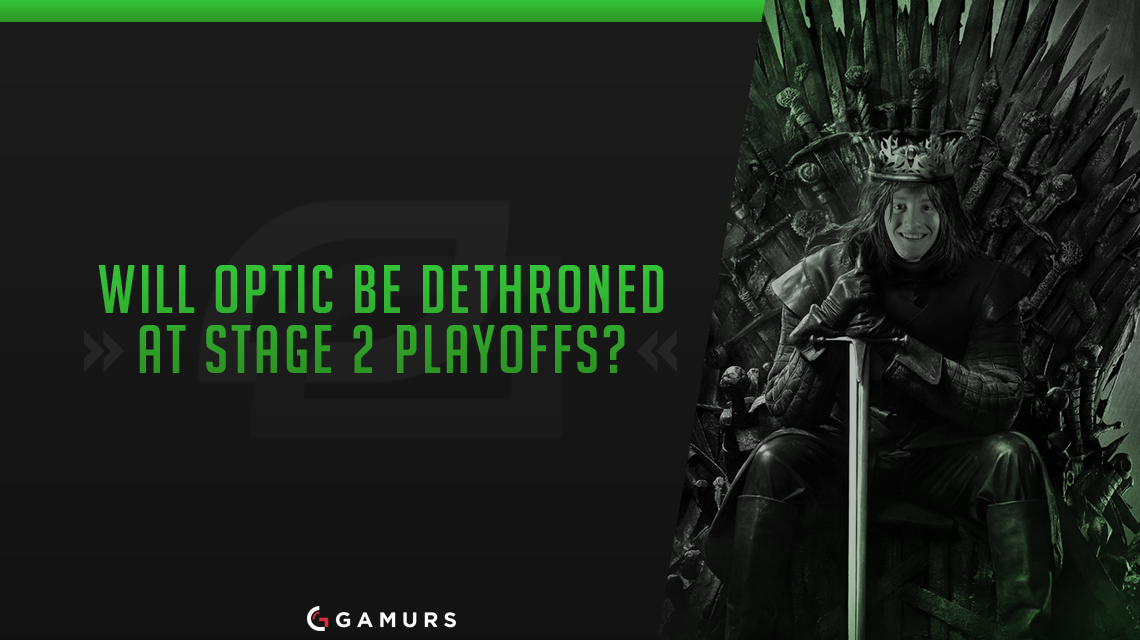 With regular season action in the North American region of the Call of Duty World League coming to an end last week, the Stage Two playoffs are set to take place from July 14-17 in Burbank, California. However, at the end of this regular season, Call of Duty fans saw something that they have not seen since Call of Duty®: Ghosts; OpTic Gaming did not finish in first place of an official league.

OpTic ran into a bit of misfortune with travel issues and player suspensions, resulting in a couple of forfeits that cost them the number one seed in the long run. Regardless, OpTic, finished the regular season with a 16-6 record, but earned the number two seed because they had a worse map-win percentage compared to Team EnVyUs, despite this difference only being 0.7%.

Thus, a question that has been on the minds of many Call of Duty fans for a while now is being heavily debated more than ever; will OpTic Gaming finally be dethroned at the Stage Two playoffs?

As the two seed for the NA CWL, OpTic could potentially have the most difficult path to the grand finals. OpTic will play their first match of the event on Thursday, July 14, at 8:30 EDT against the seventh seeded Luminosity Gaming. However, do not let their record fool you, Luminosity means business. Luminosity was playing great Call of Duty at the end of Stage Two, finishing with a record of 11-11.

These two teams also met in the first round of the Championship Bracket at MLG Anaheim 2016. While OpTic came out on top of that series with a 3-1 victory, Luminosity did not make it easy for them. After OpTic dominated the Hardpoint matchup, Luminosity was able to respond with a strong 6-0 win on Breach Search and Destroy. Despite losing the next two maps, Luminosity definitely gave OpTic a run for their money, only losing 6-4 on Infection Uplink and 2-1 on Stronghold Capture the Flag.

Luminosity has been playing well lately, led by the great slaying power of Jeremy “StuDyy” Astacio and the mid-season acquisition of Anthony “NAMELESS” Wheeler has definitely paid dividends. Even though MLG Anaheim was only one month ago, Luminosity seems like a much different team since then, which makes them the first threat to OpTic’s claim to the Call of Duty crown.

However, we have to be realistic here: OpTic will most likely be able to defeat Luminosity in the first round. If they are able to get past Luminosity, OpTic will then move on to play the winner of FaZe Clan vs. Dream Team, which barring a shocking upset, would probably mean they would play against FaZe.

Much like Luminosity, FaZe played extremely well down the stretch, finishing Stage Two in third place with a record of 13-9. While OpTic and FaZe did not meet up at MLG Anaheim, FaZe did play against Rise at both Anaheim and the Stage One playoffs. Rise won both series, 3-1 and 4-0 respectively.

Some of you might not think that this has any correlation to the OpTic matchup, but you could look at it from the perspective that OpTic has defeated Rise, who has defeated FaZe. Using this logic, OpTic should be able to defeat FaZe on LAN. However, this is not guaranteed or sound logic; more or less just a random coincidence.

Regardless, the OpTic vs. FaZe rivalry could be rekindled at this event, and FaZe will defeating come out of the gates firing on all cylinders. Most teams do not have the aggressive slayers to compete with OpTic, but FaZe is one of the few teams who does. If FaZe is able to get past Dream Team, they could pose a serious threat to OpTic’s shot at the title.

This time around, OpTic defeating FaZe is most certainly not a guaranteed victory. However, if they are able to get past both Luminosity and FaZe, chances are that OpTic would most likely play either Team EnVyUs or Rise Nation. Both of these teams would present a difficult matchup for OpTic. Rise has played well against OpTic all year long and Team EnVyUs is riding a hot streak lately that makes them one of the most dangerous teams in this tournament.

EnVyUs finished Stage Two with a 16-6 record and the number one seed in these playoffs. The acquisitions of Johnathan “John” Perez and Bryan “Apathy” Zhelyazkov have clearly paid off for EnVyUs as they rival OpTic as one of the best slaying teams in Call of Duty.

On the other hand, Rise as been by far OpTic’s toughest opponent in Call of Duty®: Black Ops III, including their classic game seven, round eleven showdown in the grand finals of the Stage One playoffs. While Rise has struggled lately online, they are still one of the best LAN teams in the game, which absolutely makes them a threat to take the championship away from OpTic.

Both Rise and EnVyUs would be tough opponents for OpTic if they were to meet in the grand finals of this event. However, the question still remains whether or not any team in this tournament can defeat OpTic in a best-of-seven series on LAN. Anything is possible, and the four teams highlighted in this article definitely all have the ability to pull off this “upset,” but until it actually happens, I think OpTic deserves the benefit of the doubt as the best team in the game.

The Stage Two playoffs will definitely be OpTic’s most difficult test to date, but at the end of the day, I would not be surprised to see them hoisting the trophy on Championship Sunday. But, on the other hand, it just feels like it is time for a new champion in Call of Duty, and Luminosity, FaZe, Rise and EnVyUs all have the potential to dethrone OpTic this weekend.

Do you think that OpTic Gaming will be dethroned at the CWL Stage Two playoffs, or do you think they will win it all once again? Let us know by commenting below or tweeting us @GAMURScom.