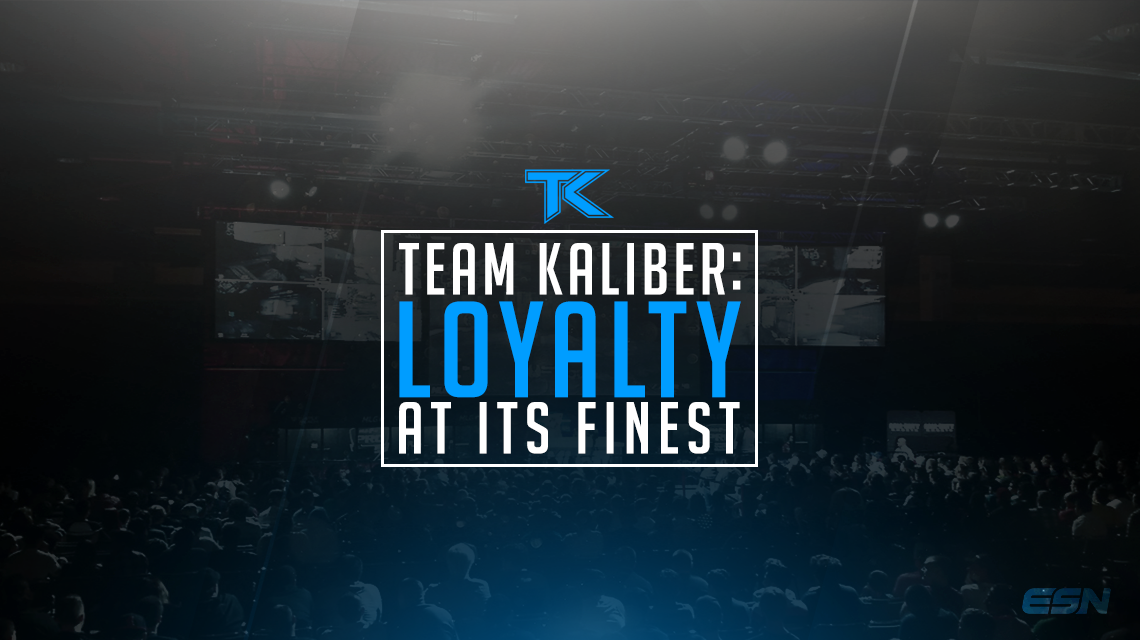 Team Kaliber is an eSports organization that we all know and love, formed and founded upon the values of loyalty, teamwork and dedication to competitive Call of Duty. The team hasn’t had the most exciting and successful run throughout the past two years they’ve been around, but they continue to remain together and fight for championship titles.

Team Kaliber (154K Twitter followers) is arguably one of the world’s most popular Call of Duty organizations behind OpTic Gaming (1M) and FaZe Clan (838K), in terms of their social media presence and Twitter fanbase. This can be attributed to the fact that tK initially started as a sniping organization and found success with YouTube, similar to both OpTic Gaming and FaZe Clan, and later moved into the eSports-side.

Team Kaliber has gone through a very small amount of roster changes throughout its history. The original roster consisted of Dylan “ Theory ” McGee, Brandon “ Sharp ” Rodgers, Jeremy “ Neslo ” Olsen and Jevon “ Goonjar ” Gooljar-lim (now apart of U4X eSports ), which were mostly obtained from vVv Gaming back in 2013 to compete in Call of Duty®: Black Ops II .

They were chosen by Team Kaliber founder Jimmy “ Chaosxsilencer ” M. with the idea of being a homegrown squad, rather than purchasing a premade powerhouse team. After finishing second to none other than compLexity Gaming at UMG Atlanta 2013 , tK was immediately thrusted onto the community’s radar among other top-tiered teams. The team had great success throughout the conclusion of Black Ops II and into the first-half of Call of Duty®: Ghosts , consistently placing within the top-four for the next five major tournaments.

The beginning of Ghosts saw Team Kaliber finishing in second place for two competitions in a row. After the second, second place finish to compLexity during the Major League Gaming Fall Championship, Goonjar left the team to join Team EnVy . Luckily for tK, James “ Clayster ” Eubanks (FaZe Clan) had just been released by compLexity and was quickly picked up. Once again though, the squad finished second to compLexity’s newly formed squad yet again.

Clayster then left the organization to pursue OpTic Gaming. This paved the way for Matthew “ FormaL ” Piper (OpTic Gaming), a former Halo professional who was looking to prove his worth, and prove his worth he did with a stellar performance after UMG Philadelphia. Team Kaliber also made an internal decision to drop Neslo and bring back Goonjar for the Call of Duty Championship 2014 North American Regional Qualifiers. After finishing at a respectable third place, tK was going into the World Championship with high expectations only to fall short and place top-16.

Dawn of a new era

Team Kaliber went into MLG Anaheim 2014 with high expectations after their recent second place finish. The team was unable to capitalize on any sort of momentum and finished with a disappointing eighth place finish. As a result, Apathy was replaced by Theory, completing the return of their original roster. Team Kaliber attended AEL Dallas shortly after and won the event. It was definitely advantageous of tK to bring back their original roster, which was proved after placing top-eight throughout the last five events for Ghosts.

During Call of Duty®: Advanced Warfare , Team Kaliber dropped Neslo for Daniel “ Loony ” Loza (Team EnVy) for the first six events. The organization again sought the replicate their Black Ops II success but fell short again, only placing top-three once out of the first six tournaments.

After placing eighth at the Call of Duty Championship 2015 , Theory and Looney were replaced by Anthony “ NameLeSs ” Wheeler and Chris “ Parasite ” Duarte ( Epsilon eSports ). With their new roster, tK placed first at UGC Niagara , their first major event title, and believed that they had found the team that could bring them back to their old glory. Again, the team fell short, placing all all over the place throughout the next few events. Due to internal problems, Parasite and Goonjar left tK. The team picked up Neslo and Theory again. As of late, tK has struggled to be a dominant pro team in Advanced Warfare, failing to place higher fifth-sixth in their last four tournaments including the most recent major event, UMG Washington D.C.

Although they may not be the flashiest or most dominant team in Call of Duty , they have some of the most loyal and consistent members. For example, Sharp has captained tK since its inception and never seems to be anything but happy with himself and his team.

Neslo, a member who has had a constant cycle of joining and leaving the organization, continues to love and enjoy playing with the current roster. It’s amazing to see the dedication and appreciation for a place that feels like home.

To get a little more insight on the team, we were able to ask Neslo a few questions.

A: “I joined the original tK team while they were still in transition from vVv Gaming. We made the decision to join tK because we liked the vision from Choasxsilencer. Knowing his success with YouTube and the others involved with starting tK, along with the financial backing we had from the start made us feel safe.”

Q: Why did you join back?

A: “I joined back because tK is home for me. It was the start of my pro career and being a part of the core makes being back feel better. That, and seeing us all grow, KOSDFF, Chaos, and everyone on tK as people and as personalities, it’s an awesome experience to see and be a part of. We didn’t want to become the next OpTic Gaming, we wanted to do things our way, like a family. These are not just my teammates, but they are also my friends. At the end of the day it’s a business, but we can kick back, have some drinks and enjoy life. We’ve been together and around each other more than I believe any other team has when it comes to organization and player relations with the exception of maybe Scump and OpTic. tK is my favorite organization so being here will always feel right.”

Even though Team Kaliber hasn’t had the most success in competitive CoD, they have been able to grow a steady fan base on their social media platforms and continue to remain true to their values, while pushing to be a top team going into Call of Duty®: Black Ops III .

What do you think about Team Kaliber? Do you think they will make a push to higher places for the remainder of Advanced Warfare and eventually Black Ops 3? Let us know in the comments. Stay up-to-date with Call of Duty teams over at our Twitter – @eSportsNation .