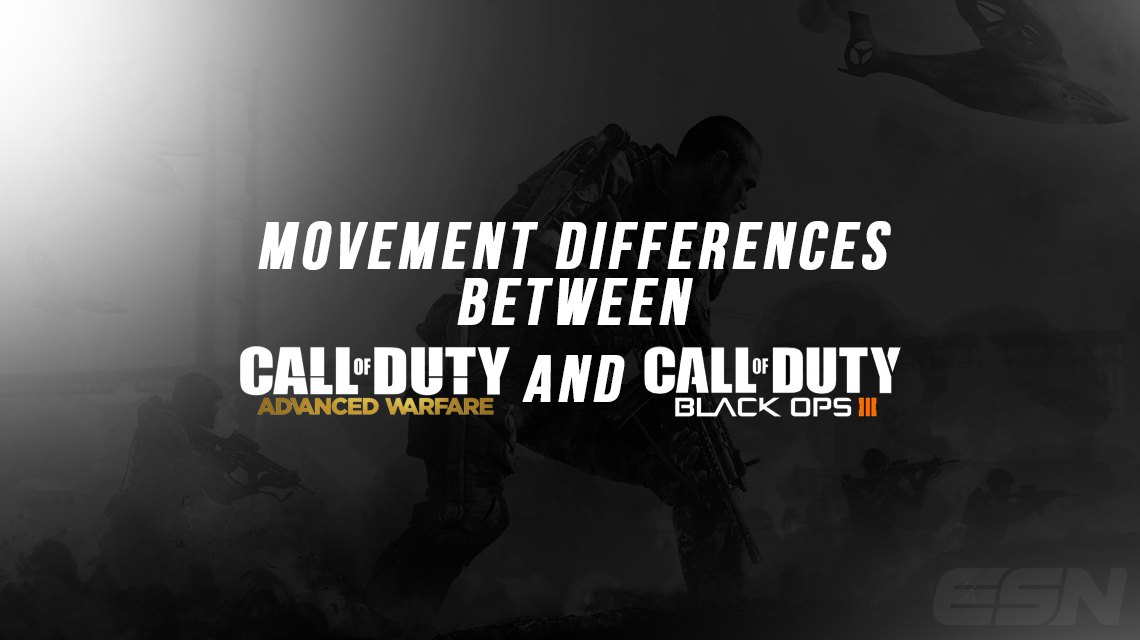 Yet another key topic of discussion after the release of the Call of Duty®: Black Ops III Multiplayer Beta has been the additional changes that Treyarch Studios has made to the movement system in the latest installment of the Call of Duty franchise.

Treyarch has revamped the way players move in Black Ops III and there is a clear difference between this new movement system and the way players maneuvered the maps in Call of Duty®: Advanced Warfare. In Advanced Warfare, players were able to utilize “boost jumps” in order to jump extremely high in the air. By pressing the “A” or “X” button once, players would perform a normal jump, but by pressing the same button two times quickly, players would jetpack right into the air, adding an element of verticality to Call of Duty. Additionally, players in Advanced Warfare could utilize their left analog stick to “boost dodge” in whatever direction they chose. For example, a player could boost dodge forward if they were to hit their left stick forward. This movement allowed for players to get in and out of certain areas and gunfights really quickly and brought an element of unpredictability to Advanced Warfare. Finally, Advanced Warfare introduced the Exosuit Abilities, which gave players certain advantages in terms of movement. A player could equip the “Hover” exo ability to momentarily float in mid-air after successfully boost jumping, or a player could use “Overclock” to increase movement speed for a short period of time. https://www.youtube.com/watch?v=uUVuXiqEqkA In contrast, Treyarch has completely moved away from the Advanced Warfare movement system and reinvented the way players move in Black Ops III. Treyarch has introduced the “thrust jump” mechanic, which is actually a lot different from the boost jumps in Advanced Warfare. The thrust jump introduces a thrust meter, which will appear on a player’s screen when they go to jump. Players are only able to jump when they have power in their thrust meter. For example, a player can hold down “A” or “X” to perform one big thrust jump, which would drain the entire thrust meter, or a player can simply tap “A” or “X” to perform multiple smaller thrust jumps that would not drain the meter as quickly. These thrust jumps are able to be completely controlled by the player and do not bring the same vertical height advantage that players from Advanced Warfare have referred to as “jetpacking.” The thrust jumps simply allow players to control every aspect of their jumping, from which direction they are going in to how high or low their jump itself is. https://www.youtube.com/watch?v=9iamxgDAC3M In addition, Treyarch has introduced chainable movements to go along with thrust jumps in Black Ops III. Players are now able to program what movements they want to do before they actually execute the movement itself. For example, players are now able to go into a power slide and while sliding, they can hold down “A” or “X” for a large thrust jump. What will happen is that as soon as the slide is over, the player will complete the thrust jump, even though they pressed the command earlier. On the other hand, a player is able to hold down “A” or “X” for a large thrust jump, and while in mid-air, press the button for a power slide so as soon as they land from their jump, they will go directly into a power slide. https://www.youtube.com/watch?v=oquIYGQ3w0I Finally, players can now easily run along almost any outer-surface on any map now that wall running has been introduced in Black Ops III. Simply run or jump near a wall and press your left analog stick in the direction of the wall that you are facing. Continue to press the analog stick forward to keep running along the wall in that particular direction. You can do just about everything while wall running, including shooting your gun and throwing grenades. Just don’t try to aim down your sights, because that will cause you to fall off the wall and could make you fall to your death. Everything seems more fluid and smooth in Black Ops III. Sprint is unlimited as well, which gives players the same advantage in constantly sprinting across the map if that is their playstyle. The majority of gunfights should be occurring on the ground in Black Ops III, which is also a huge difference when compared to the amount of aerial-gunfights in Advanced Warfare. However, it is great to see that all of the movements are connected to one another and the new thrust jump mechanic seems much more balanced than the movement system from Advanced Warfare. So far, after playing the beta for Black Ops III, it seems like the age of jetpacking will be behind us, and players will be able to look forward to a slightly-enhanced version of past Call of Duty movement systems when Treyarch releases Black Ops III on Nov. 6, 2015. Do you like the new movement system in Call of Duty®: Black Ops III more than the movement system from Call of Duty®: Advanced Warfare? Let us know by commenting below or tweeting us @eSportsNation.