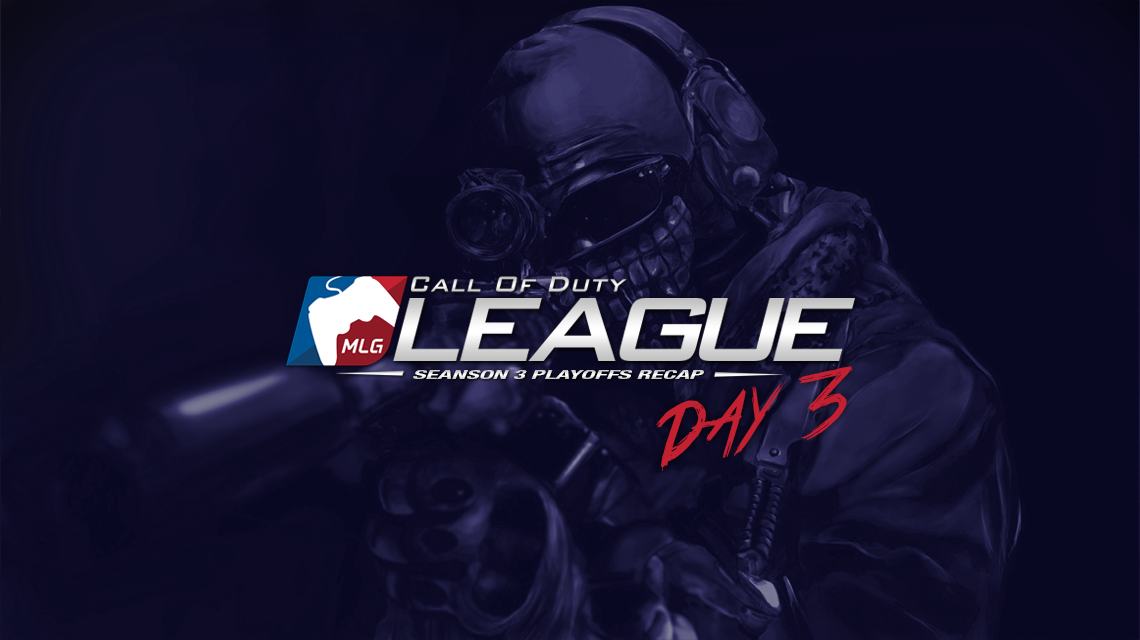 Strikezone Domination: OpTic Gaming carried their momentum from yesterday into the beginning of the first map. They took an early 20 point lead in the first two minutes. MW turned things around and managed to trap OpTic in the B-flag. They reduced OpTic’s lead to only nine points going into the second side. MW continued to trap OpTic and eventually won the game by a score of 156-152 in a crazy start to the series.

Warhawk Search and Destroy: MW carried their momentum over from the first map and take a commanding 4-1 lead over OG. Within the sixth round, we witnessed the first bomb glitch of the day and the map is restarted with a 3v2 situation in favor of MW. MW reiterate their dominance by going on to win 6-2, along with a 2-0 lead in the series.

Freight Blitz: OpTic Gaming opened the map with an aggressive game plan, with Scump picking up an early two piece, allowing his team to gain map control and an early 1-0 lead. However, MW were able to withstand OG’s heavy pressure through a number of good defensive plays and came out on top at the end of the first side with a 6-4 lead. MW began to walk away with the game, pinning OG in their spawn, while extending their lead to 13-7. MW won the map 16-11 and secured the 3-0 sweep over OG.

Sovereign Domination: Within the opening minute of the round, neither team was able to secure any significant control, as both teams battle for B flag control. However, we quickly begin to witness nV securing a notable lead as they push Noble intro a triple cap. At the end of the first half, nV was up 92-69. Within the second side we see a stronger team performance from Noble as they narrowed the deficit to an even scoreline with 1 minute and 35 seconds to play. However, in the last minute nV regained their control as they secured the win to go up 1-0 in the series.

Warhawk Search and Destroy: Within the opening round, both Formal and Slasher earned two kills, however it is JKap who comes up clutch as nV took an early 1-0 lead. MW were able to secure the following four rounds as Miyagi makes several noticeable plays. nV managed to bring the map back into contention and we swiftly saw the score tied at 4-4. Sender was able to secure the following round for his team, however Nameless clutches a 1v2 to take the game to an iconic round 11. Noble manage to pick off 3 members of Team EnVyUs early as Noble took the game 6-5 and tied up the series.

Warhawk Blitz: nV opened up the scoreboard with a couple of quick caps and took an early 2-0 lead. Noble was able to reply with a cap of their own. However, nV responded by getting three more to take a 5-1 lead going into the second side. Within the second half, we saw both teams trade captures, resulting in very little change within the scoreline. nV was able to win the map 9-4, reclaiming their lead in the series.

Freight Domination: Initially the game starts out close, with both teams battling back and forth for B flag control. However, it is nV who manage to secure the two cap and begin to build a steady lead. B flag is traded between the two teams several times and as a result, nV earn a slender lead heading into the second half. Within the first minute of the second half, the B flag remained neutral as neither team was able to secure significant control. However, once again, Team EnVyUs was able to come out on top to secure the series with a 3-1 win over Noble.

Octane Domination: Within the first side both teams battled back and forth, with Noble managing to maintain control for a decent amount of time. However, MW fought back, and with two minutes remaining they were able to secure significant time on the flags, reducing the deficit to a narrow margin. Noble open the second half with B flag control, securing a small lead. Slasher was making noticeable plays, impressively slaying the MW squad, while extending his teams lead. With two minutes left, Huhdle is able to capture B flag, while both teams neutralized each others home flags. Unfortunately MW’s two cap was not enough to bring them back into the game and Noble won the first map.

Warhawk Search and Destroy: Despite losing the previous map, MW opens Warhawk SnD with a convincing first round, planting the bomb and picking off Miyagi in a 4v1 situation. Nevertheless, Noble quickly answered back with a similar round as they shut down Slacked in a 3v1, tying the round at 1-1. Noble began to gain some momentum and begin to earn a slender lead as they won the following rounds to secure a dominant victory over MW to go up 2-0 in the series.

Octane Blitz: Within the first half we witnessed both teams trade blitz captures back and forth, with Miyagi, Spacely, Slacked and Classic all getting their names on the board for their teams. MW go on to gain a significant lead within the game as they proceed to relay caps, concluding the first half with a 10-5 lead over Noble. Upon the launch of the second half both teams once again traded captures, however Noble was unable to cap at a quick enough rate to narrow the deficit and as a result MW secure the map 24-17.

Sovereign Domination: Both teams opened the map with a strong performance. However, Noble came away with B flag control. At the end of the first side, Noble lead by a slender margin of 76-73. Heading into the second round, Noble managed to slay all four member of MW and capture B. With three minutes remaining Noble lead 105-97. MW was able to fight back and secure a two cap and a neutralization. With thirty seconds to go, MW were able to hold down B and take the map 157-156, forcing a decisive game 5.

Octane Search and Destroy: Heading into the final map, neither team was able to gain a significant lead, as they scoreline sits a 1-1. Following Classic’s ace, MW begin to heat up, securing a 3-1 lead after the game is restarted due to the bomb glitch. The following rounds are traded back and forth between the two teams, with MW extending their lead to 5-3. Smart plays from Noble allowed them to win the next two rounds, taking the game to the iconic round 11. Within the final round, kills are traded by both teams, resulting in a 2v2 situation. Noble was able to plant the bomb and Sender and Slacked found themselves in an intense 1v1 matchup. Under controversial circumstances Sender was able to clutch the round, supposedly killing Slacked while he was ninja defusing as a result of the reactions of the crowd and casters. Nevertheless, Noble secured the map 6-5 and earned their spot in the Grand Finals with a 3-2 series win over MW.

Sovereign Domination: EnVyUs dominated the opening minutes of the game by holding Noble to only a home flag and continuously pushing for full control. Noble began to fight back into the game by keep composure in a big moment. nV was up by around fifty points to end the first half which is very hard to come back from. Noble came out stronger at the start of the second half. They cut the score down quickly by keeping control of their home and B flag. nV had a big enough lead to cruise to a 165-144 victory to open the series.

Warhawk Search and Destroy: Noble came into this map starting off strong winning the first, second, and third rounds in a dominant fashion. However, nV fought back and eventually tied the game up at 4-4. Nameless and Miyagi both died, making it 3v3. Sender was left in a 2v1 situation and nV took him out making it 5-4 nV. Chino was left in a 3v1 and was killed by JKap as nV won the map 6-4 to go up 2-0 in the series.

Warhawk Blitz: nV came into this game strong, making the first play to get a capture on the board. They kicked it up a notch and put three more caps on the board before the end of the half making it 4-0. nV added one more to the board making it 5-0 while playing excellent defense to win the map and take home the Championship.