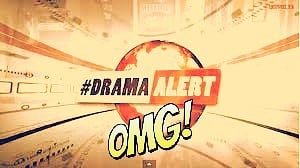 [EDIT] This section has recently been added in light of Keemstar’s most recent douche move. Most people in the Call of Duty community have heard about the tragic passing of @Froggir_eX. The hashtag #RIPLukeInwood spread like wildfire on social media.

Also in the past week, many accounts have been getting hacked. It’s pretty disgusting to say the least, and it appears that someone hacked Froggir on Twitter….

You’ve all seen it before, the infamous hashtag used by Keemstar, the lovable, hate-able, news anchor/ drama propagator of the eSports world. I’m probably going to get a lot of hate for this article (and hopefully a bit of love too), but should I care? Keemstar sure doesn’t.  Most people think he is a douche, but he still manages to make a living off of #DramaAlert!  So here goes…

I can’t stand seeing Keemstar tweets on my timeline.

I can’t stand how I feel the urge to click his videos.

I can’t stand the news in his videos.

I can’t stand all of the love he gets for tarnishing other people’s reputations.

“Leeeet’s get riiiiigggght into the neeews.” Alright, so Keemstar isn’t all bad all of the time.  He is sort of a mixture of a real news station and TMZ.  His intro is pretty nice; it makes me feel like I am catching the start of CNN or something.  Then, he says some silly stuff like the quote above and starts spewing out some of the happenings within the eSports community.  I say it’s like TMZ because he is basically following all of the big names in eSports through their social networks and reporting anything that might deal with a bit of controversy.  It’s pretty much like he is the paparazzi who follow Hollywood celebrities with their cameras 24/7 and hope to catch a scandalous picture to share with the world. Other times, he is just reporting on the big things happening in the community.

That’s why it’s not all bad, because news like Faze Clan being hacked on all of their accounts by the old Lizard Squad is interesting and noteworthy.  People want to know about that; it’s relevant, and that’s what news really is: unbiased and straightforward.

The problem is when you start creating the news yourself.  Have you seen the movie “Nightcrawler”? The main character is a straight weirdo who gets into the business of filming graphic content such as car accidents and stabbings and then sells the video to a news station.  He learns a few tricks along the way and eventually begins setting up scenes to make them more film-worthy.  This leads to people dying, and he gets away with it.

Keemstar is treading on thin ice. He sometimes propagates drama himself and then reaps the benefit by having a lot of content for a story.  A few months ago, he propagated a scandal between Faze Banks and a guy called SoaRMakz.  His original tweets are now deleted, but he created an argument on Twitter and everyone easily caught on.  Pamaj was the first one to make the Nightcrawler reference:

The newest, ongoing story is much more controversial, and I want to put it out there right now that I am not taking sides; I just don’t agree with Keemstar’s tactics.  It is difficult to disagree with Keemstar on this topic without coming across as a defender of the person he is attacking. The following information comes from a video posted by Keemstar about a week ago.

Keemstar has a #DramaAlert subreddit where people literally give him the news he later reports.  He says that a message came in accusing another YouTuber named Bashur of being a registered sex offender.  He then asked Bashur if he was a sex offender, to which the response wasn’t a straight yes or a straight no, rather, “Where did you get this information?”

Keemstar later states that Bashur was accused of attempting to have sex with a child.  The story he tells comes from Bashur himself, who said that after turning 18 (11 years ago) he began texting the younger sister of a friend who was 15; but different ages have been coming from different sources.  He confesses to sending sexual text messages to the girl; and her parents found out, resulting in his arrest.

Keemstar says that Bashur tried to sell himself as a victim, and that’s what he is so upset about, calling it ‘”manipulation.”  However, this story has propagated from more than a story, and that’s what I am not okay with.  Some may call it investigative reporting, but others will call it a personal attack.

Yes, Bashur made bad decisions in his life.  He should have known that he was in the wrong and should never have been texting the things he did.  He was then arrested and served his time for the crime.  I cannot and will not defend Bashur for whatever happened, but I do not agree with the public shaming Keemstar is purposely inflicting either.

Bashur is a YouTuber.  He committed his crime 11 years ago.  He served his time.  He has zero contact with any of his fans, because YouTube is an online business.  As a sex offender, there are probably very few jobs he is able to have in the first place.  My question is, why is it relevant in any way for us to know that he is a convicted sex offender? I don’t see it, I don’t see why this information needs to be disclosed, because we are only watching videos.

I do know why Keemstar is making videos on it every day. It’s something that gets the people going, leading them to call Bashur a pedophile and a rapist. The life the guy built up after serving his sentence is going downhill fast, with a lot of help from Keemstar.

This is an extremely controversial topic.  I know some people are going to say that I am defending Bashur, but in my mind I am simply condemning Keemstar for bringing up the past because I believe it to be irrelevant.

Keemstar, you can keep doing #DramaAlert, okay bud?  Just stop trying to create the news yourself. There is a reason your accounts have been banned multiple times.