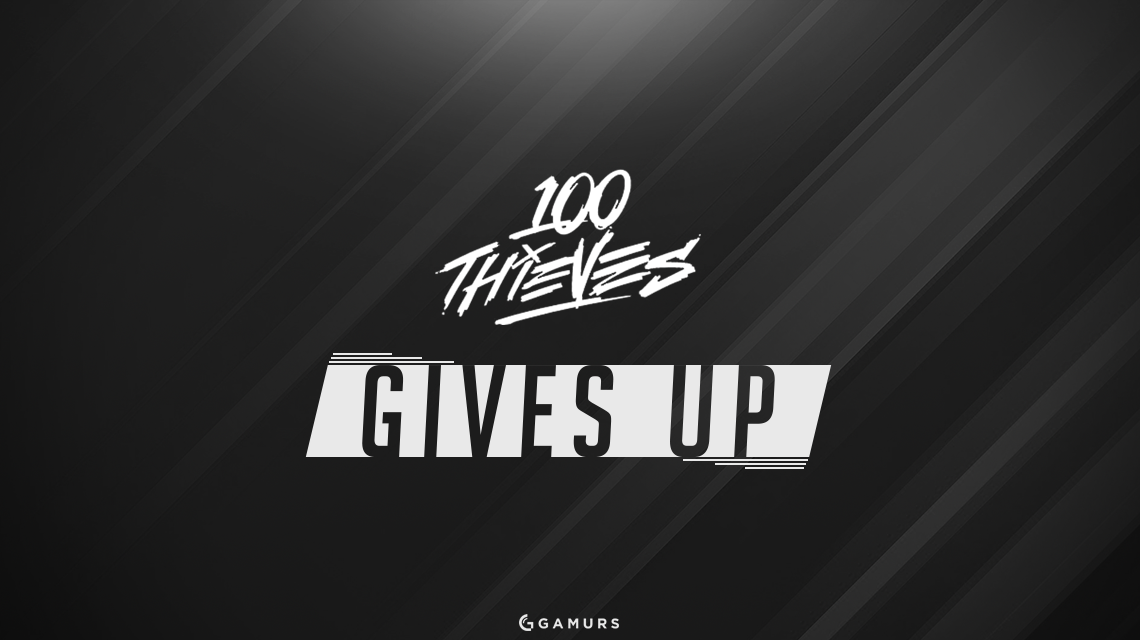 Roster changes and moving players to and from the bench have not made a difference. Hundred Thieves have simply given up.

In their Call of Duty World League matches this week, Hundred Thieves truly did have a chance. Their match on Tuesday against compLexity looked to be going their way, putting them up 2-0 in the series. But as we all know, Hundred Thieves can not play Uplink. At this point, it’s probably more in their head than the truth. They can play Uplink, but they are so used to losing that it doesn’t matter. Against compLexity, Hundred Thieves managed to keep it close. They lost Infection Uplink 7-3 and then allowed themselves to be reverse swept. Another loss in the books to extend their losing streak to 10. Absolutely no one can say they are actually surprised by this because we have all seen how the team truly lays down and dies when they feel they have already lost. Instead of starting the next match on a high note, they start on a low note and the trend continues.

Removing Brandon “Nelson” McKinney from the starting roster seemed like an easy way to fix the team chemistry and stop the childish behavior. He was the one who literally stopped playing while at MLG Anaheim with everyone watching. They replaced him with John “Johnny” Cookson, who was on the original Hundred Thieves roster and had a great tournament at Anaheim with Lethal Gaming. Putting him back on the team got rid of the antics but has not led Hundred Thieves to success just yet. But at this point, there really is no success to be had considering the team has no chance at qualifying for the Stage 2 playoffs.

Perhaps Hundred Thieves really hasn’t given up. Maybe they just stop trying when it is mathematically impossible to win a game.

In their match against Rise Nation today, Hundred Thieves looked revived. No one would have chosen them to beat Rise, but Hundred Thieves did not seem to care. Evac Hardpoint was incredible to watch between the two teams, with a winner not determined until the last few seconds. Both teams were constantly contesting the hill, back and forth, until Rise Nation were able to eat up the clock and secure a 250-248 victory. It was a heartbreaker for Hundred Thieves, who have generally been very good at Hardpoint in the league. Their momentum carried through to Stronghold Search and Destroy, but they lost in the eleventh round. With Uplink coming up, the momentum ceased and Hundred Thieves literally gave up at some point during the map. Aches began wall-running near mid-map as his teammates pushed forward and took control of Rise’ base, and yet he still did not make a move until it was too late. When he did, he was killed from behind due to his teammates influencing spawns. But before that, Hundred Thieves had already mathematically lost. The final score was 16-1. In all honesty, it is hard to score only one point on Uplink. Hundred Thieves would have scored more if it weren’t for multiple missed shots, which begs the question, do they even practice Uplink?

Nadeshot, the owner of Hundred Thieves, has already expressed his feelings in several YouTube videos. Today, he released some of his frustration while addressing all the people that constantly tell him that the team is embarrassing him. On the other hand, Nadeshot is lucky to have been able to sign a team in the Call of Duty World League considering all the other organizations looking to get in. The likes of Team Liquid and Counter Logic Gaming have already come and gone because they couldn’t field a roster good enough to make it to (or stay in) the league. Nadeshot even mentioned that organizations like Tempo Storm were interested in signing the King Papey roster before they became Hundred Thieves. However, he also mentioned that the team is not giving up which is a bit of a stretch. Any viewer who has seen them play can see that at some point in their matches when they are losing, the players do give up.

What will happen to Hundred Thieves once Stage 2 is complete? Due to the fact that they do not have a shot at making the playoffs and it is not clear what stands between that and the Call of Duty Championship, Hundred Thieves will probably break up. Building a roster around veteran and team captain Patrick “Aches” Price would be the smart move, but who will he be leading? The other guys on the roster are not bad players, but maybe they aren’t the right players. Team chemistry is as important, if not more important, than individual skill. There is plenty of talent floating around, but it will be up to Nadeshot and Aches to decide what happens next. Come MLG Orlando, Hundred Thieves will likely look like a brand new team. At least fans hope so.

Josh Billy is a long time Call of Duty fan. Contact him via email at [email protected] or on Twitter @Orbit_CH3MISTRY.