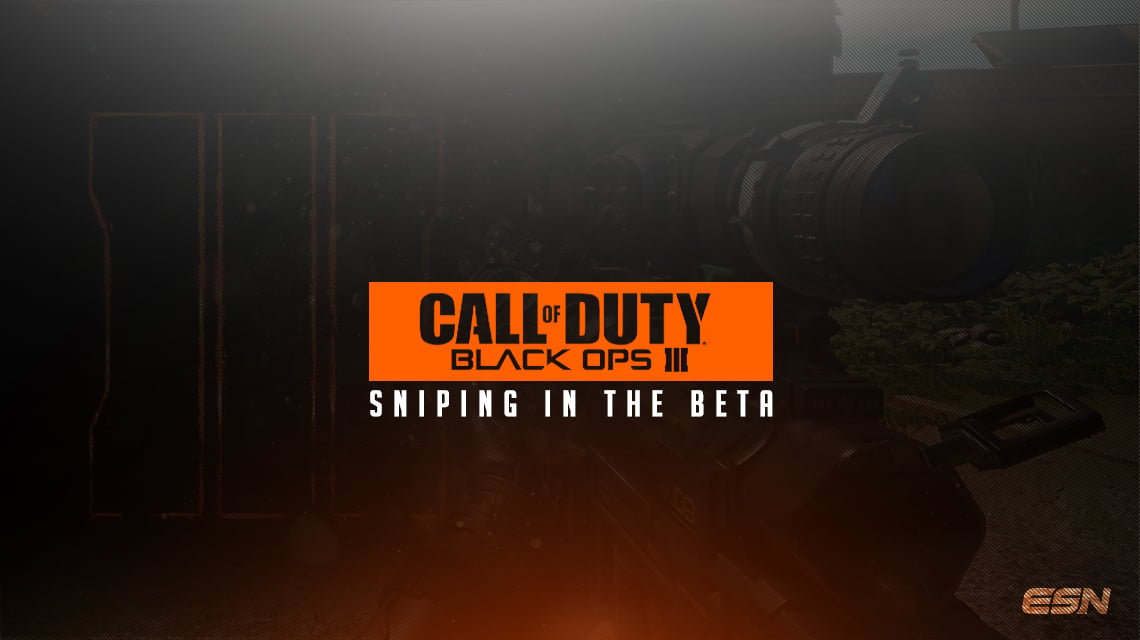 Yet another popular topic of discussion across the Call of Duty community has been the sniping in the multiplayer beta for Call of Duty®: Black Ops III. Sniping has grown to become an integral component of the Call of Duty eSports scene, especially in Search and Destroy, so players and fans alike are curious to see if this trend will continue into the next installment in the Call of Duty franchise.

The game producers over at Treyarch Studios have made several changes to the gameplay in Black Ops III, and the impact of these changes can be seen in sniping gameplay from the multiplayer beta.

Players seem to have noticed several changes in the way sniping feels in Black Ops III, which has led many to believe that sniping is not going to be good in this game. However, it is important to remember that this is just a beta, so everything in the game is still subject to further change.

The first thing to consider is the new movement system in Black Ops III. Unlike Call of Duty®: Advanced Warfare, it seems like most of the gunfights in Black Ops III will be occurring on the ground. This is good news for snipers because sniping was relatively difficult in Advanced Warfare in terms of getting a good shot on the opponent. By this, I mean that it is easier to snipe someone who is on the ground as opposed to trying to snipe someone who has jumped 20 feet in the air or trying to snipe while the sniper himself is actually in the middle of a boost-jump.

FaZe Clan sniper James “ Spratt ” claims that with the lack of aim assist in Black Ops III, snipers will need to change their shot and playstyle to adapt to no longer having the help of aim assist when aiming down their sights on an opposing player. Although, he goes on to say that adapting to change is essential in Call of Duty, and as players get used to the game, they will be able to also adjust to playing without the aim assist.

Austin “ Pamaj ,” another notable sniper, also agreed with Spratt on the impact that no aim assist will have on drag-scoping, suggesting that a lower sensitivity will help compensate for the loss of aim assist when attempting to drag-scope.

Another change is the aiming or scoping-in feature itself. Spratt claims that there is not a smooth transition while scoping in, which can cause players to overshoot, especially when drag-scoping if you start to shoot before completely dragging your aim. The sensitivity while aimed in with a sniper scope also seems to be higher than your actual sensitivity is when you are just running around and not aiming down your sights.

Finally, Spratt talks about the lack of toughness and the impact that flinching has on a sniper shot. If you are trying to hard-scope while getting shot at without focus, it becomes much more difficult to line up a solid shot, which could potentially lead to more hitmarkers since it would become harder to get headshots and shots to the chest.

The Locus seems to be the main sniper rifle of choice so far in Black Ops III. While it does not seem like the sniper itself is weak and hitmarkers have been held to a minimum, players are complaining because it is not always a guaranteed one shot kill like other more recent snipers. Nonetheless, as the clips above show, this gun can and will be competitively viable, especially in Search and Destroy as players will look to get some long range kills as first bloods to open up round win opportunities for their team.

However, regardless of all these changes, sniping in this beta may be different but not necessarily in a bad way. It is just going to take some time for players to get used to these new features or changes to the way sniping has been done in the past. The more you work at it, the better you will be. Simple as that.

Only time will tell how sniping will be once Black Ops III is officially released on Nov. 6, 2015. For now, players need to just go with the learning curve that comes with every new Call of Duty title and adapt to these few small changes if they plan on being reliable snipers in Black Ops III.

What do you think about sniping so far in the Call of Duty®: Black Ops III Multiplayer Beta? Let us know by commenting below or tweeting us @eSportsNation .