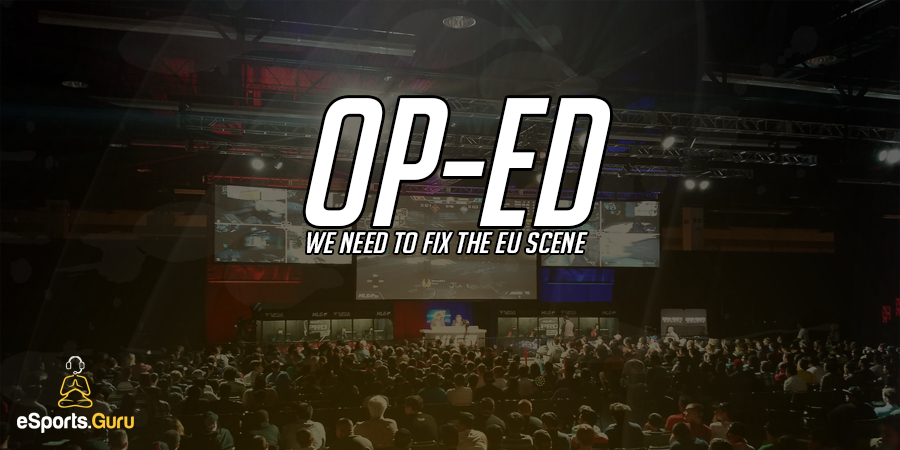 We’ve all heard the sad news today: Epsilon eSports has left the EU Call of Duty scene. As they were arguably the most successful Call of Duty organization from Europe, this is a massive blow; many are even saying that this is the end of the European scene. I’m inclined to agree that this is the end of the EU scene as we know it today. Before you say that I’m being melodramatic or a run-of-the-mill doomsayer, hear me out.

TCM and Epsilon were the two largest European organizations in Call of Duty, and they’ve both picked up North American teams. Epsilon originally kept both the European and North American teams running, but decided that the EU team was no longer viable and cut their players loose, despite the fact that the Dreamhack Call of Duty London Championship is less than two weeks away. TCM no longer has a European presence in the Call of Duty scene and shifted their entire focus over to their North American efforts. Those two teams made up the majority of the EU fanbase in the United Kingdom. (Note: I’m specifically mentioning “EU” fanbase here because by far, the most popular team worldwide is OpTic Gaming but they are NA based. By EU fanbase, I mean fans of teams based in the EU.) They were also the most successful in the European scene by a long shot.

There is not a single team in the United Kingdom or the rest of the European Union that can match their North American counterparts anymore. That’s just the skill difference, too – let’s take a look at the financial viability issue here.

There is not enough money in the European scene to justify a major organization having a presence there. In North America, it’s viable because there are active big-ticket sponsors, plenty of opportunities for prize money, and a considerably larger fanbase (meaning more stream viewers, more merchandising opportunities, more fans at events). Even lower-end major events in North America have twice the prize money of major tournaments in the United Kingdom: UMG DC had a $50,000 prize pool, whereas Dreamhack’s upcoming London Championship only has a $20,000 prize pool and Gfinity’s Spring Masters tournament this year only had a $25,000 prize pool. Most major tournaments in the United Kingdom (like Gfinity) are won decisively by North American teams who travel ‘across the pond’ to compete, which usually just leaves the minor-league tournaments for the EU players to take home for themselves.

Plain and simple, it’s just not viable right now. I firmly believe that if there was a team that could go toe-to-toe with the best of the NA squads and win, then we might be seeing something different here. That’s just not the case, though. Sure, there’s decent players in the EU that could be dangerous if put in the right situation against North American teams: Swanny is probably the best example and I’m sure that he’s going to be picked up by a North American squad at some point here in the next few months. Players like him, though, are few and far between – even when Epsilon and TCM were still active in the UK’s pro scene, there weren’t many teams that could even hope to get a second-place finish besides either of them. The skill gap between those two teams and the remainder of the EU scene was too large. If you put any of those teams up against even middling North American squads, they will look like amateurs; God forbid they get put up against the likes of OpTic or Denial.

Here’s the thing, though: that’s exactly what we need. The EU scene does not get attention or a lot of love from North American fans or sponsors. Their players don’t get the chance to get better or scrim against North American talent, and when they do they get thrashed. There’s not enough money in the EU scene to allow for anything but an amateur/AM team to compete. All of that boils down to one problem: we aren’t cultivating the EU scene. It’s not going to be an overnight success. Those teams are going to get thrashed like a team of twelve-year-old Little League baseball players taking on the Major League St. Louis Cardinals. There aren’t going to be a lot of top-three finishes by EU teams playing against North American talent. There isn’t going to be a huge return on investment right away.

Those European players and teams need to get thrashed. They need to scrim. They need to compete. They need to have the same opportunities given to them as North American squads do. Will that cost money? Yes, absolutely. Will that take time? Yes, absolutely. But will it be worth it? Yes. The European Call of Duty scene has a ton of fans, and many of them are as rabid as their North American counterparts (some even more so- I’m looking at you, you weird French dudes). There is undiscovered or unsupported talent that exists there that could easily translate to some hardcore competition on the world stage, regardless of their competition. There are sponsors and organizations that would be happy to get involved in our scene if it was given some attention and love outside of just North America. It will take time, but with some money and time and patience, we could see the EU scene become massive and the Call of Duty eSports audience become global in a huge way.

There are tons of options on how we could achieve our goals of a healthy, growing European scene. We could integrate the North American and European pro leagues by allowing them both to compete for qualifying spots at a seasonal invitational playoff/championship tournament with a large prize pool, similar to what North America has now for a Pro League setup, but guaranteeing a set number of spots for the European teams that qualify through their pro league. Fund travel support for EU teams traveling over to America when they qualify to compete at a tournament.  Create more European-based invitational tournaments like ESWC to raise awareness of the EU scene, with larger prize pools and a quota for the number of North American teams that can compete in order to encourage international participation.

Here’s the thing, though: this is up to one entity and one entity alone: our beloved overlords, Major League Gaming. Say what you will about them: you think they’re overbearing, you think they’ve monopolized the professional Call of Duty scene, or maybe you don’t like Adam Apicella’s haircut. The truth is, MLG was there for our scene even when we had little going for us. They put money into our scene to help it grow and thrive into what it has become today, and they have huge plans over the next twelve months to grow our scene even more; that said, sometimes it’s up to us- the fans- to help lobby for change that we need to see. I urge them to take a look at how they could integrate and cultivate the European scene into something that could become truly incredible.